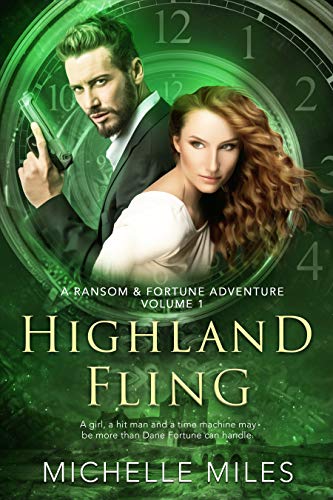 A girl, a hitman, and a time machine may be more than Dane Fortune can handle.

Skye Ransom’s peaceful college life is altered when her parents are both killed on the same day within hours of each other. But when she receives a strange package in the mail after her father’s death, it contains a small device with no explanation. Desperate to find out what it is, she goes to her father’s lab to get answers—and is nearly killed by a hitman. The mysterious Dane Fortune offers her protection, leaving her no choice but to accept.

Ex-military man Dane Fortune is hired by a brilliant inventor to protect his life and the lives of his family. But when the inventor and his wife are taken out by a hitman before the job even gets started, Dane knows he has to get to their daughter before something happens to her. Keeping her safe becomes more difficult than he anticipates as more than one foe is after her and a device she doesn’t even know she possesses—a small-scale time machine.

With the hitman and the NSA hot on their trail, Skye inadvertently transports them back in time to the thirteenth century where they find themselves in the middle of Scotland’s battle for independence from England.

At the mercy of the time machine—and learning to trust each other—they have to find a way back home before they’re trapped in the past forever.

The shop was not a modern one. It was a specialty clothing store with handmade medieval costumes divided by century on one side. On the other, costumes from popular movies and TV shows as well as the standard vampire, witch, ghost. A short bald man came from a back room and greeted her with a broad smile while Dane continued to stand at the window, gun in hand. She blocked the salesclerk’s view of Dane so he wouldn’t see the gun.

“Good afternoon. How can I help you?” He spoke in a thick British accent.

She pasted on her best smile. “Hi, there! Do you have anything medieval-ish?” A silly question, she knew, but she was trying to keep the clerk busy and not focused on Dane.

“Are you looking for something in particular?” he asked.

“Oh, you know, just something I can wear to an upcoming costume party for work.”

He led her through the shop to a rack devoted to gowns that looked like something from a renaissance festival. He pulled a midnight blue dress in velvet off the rack and held it up.

“This would go beautifully with your coloring.”

He motioned to the dressing room off to the left. She ducked inside, closing the flimsy wood door and sliding the lock. She clutched the dress to her chest, straining her ears to listen for any sound coming from the front of the store. She heard the clerk talking to Dane and then Dane responding in a terse tone of voice. She couldn’t make out the words but it didn’t sound friendly.

The door chime sounded. Then a scuffle. Skye pulled the dress on over her clothes and huddled against the corner of the dressing room, still clutching the time bender. She’d never opened her fist since Thomas slid it to her.

Was Thomas a bad guy, too? Or could she trust him? She didn’t know.

She heard a voice outside the dressing room door, an unmistakable baritone that made her blood run cold. The baritone voice belonged to the hitman. A pop, pop of gunfire, a thunk as if a body hit the floor. She gasped, covering her mouth with her hand.

“Where’s the girl?” the hitman said.

Her hand gripped tighter around the little machine and suddenly it buzzed in her hand. She flexed her fingers enough to see the tiny screen had come alive with numbers in green. But part of them was faded out and she couldn’t tell what the numbers were. A date?

The door to the dressing room crashed inward making it splinter into a thousand pieces. Skye flattened her body as much as she could against the mirror. The hitman filled up every inch of the door, glaring down at her with dark, terrible eyes. He reached for her, nearly had his hand on her, when he flew back and Dane was suddenly there.

Dane threw a punch, knocking the guy back a step or two. But he was bigger and meaner. He came back with a punch of his own that landed on Dane’s jaw. Dane stumbled backward into the dressing room bumping into Skye.

Her hand closed in reflex around the time bender. There was a sudden crackle of light and a strange hissing sound and she realized she’d accidentally pushed the black button. Thomas Hardy’s words echoed immediately in her mind…

…and she felt her heart come to a shuddering, horrified halt.

And then there was nothing at all.