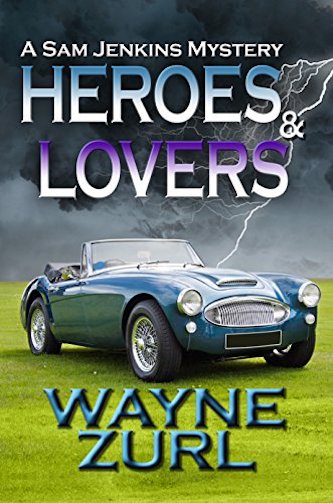 Wayne Zurl knows how to entertain readers just as he solved crimes in his real-life career as a New York detective.

But the case puts Rachel in jeopardy and her abduction by a mentally disturbed man, changes her life forever.

After several frustrating days, Jenkins uncovers a significant clue and leads a team deep into the Smoky Mountains to rescue his friend.

But after Rachel is once again safe at home, they find that her problems are far from over.

When we pulled up at the repair shop, it took me less than a minute to spot Elrod sitting in his office reading a magazine. Another young man worked on a pick-up truck in the garage bay and two others sat on folding chairs nearby talking with him, drinking soda from cans. We sat twenty yards from the open garage door and heard a radio playing. Someone lamented the loss of his girlfriend and contemplated his exodus to San Antone. The song didn’t sound like one of the icons of country music to me.

Len Alcock, Bobby John Crockett, and Stan Rose pulled their marked police cars curbside, blocking the driveways after Junior and I drove up to the office door. The two soda drinkers were about to run when Alcock and Crockett put the arm on them.

Stanley rousted the mechanic, a guy who looked like he ate pit bulls for breakfast, before he could hide in the supply room off the work area.

Junior followed me into the office. I walked up to a scarred and dented gray metal desk. An open bag of pork rinds lay on top, next to a two-liter bottle of Mello Yello. A half-eaten corn dog hid in a wrinkled wrapper.

He was a thin, shady-looking character with short hair and sideburns ending below his earlobes. His dark blue mechanic’s outfit hadn’t seen soap in a long time.

Elrod eyed me for a few seconds and then shifted his look to Junior and back again to me. If he didn’t assume I was a cop, he was more mentally bereft than I anticipated.

“That’s me.” His voice cracked a little as he tried a nervous smile.

“The Elrod Swaggerty?” I started to enjoy myself.

I held up a copy of the arrest warrant for him to see. “I know you were hoping Officer Huskey and I came from Publisher’s Clearing House and were about to give you a check for a million bucks, but I’m sorry to disappoint you.”

I heard Junior try to stifle a laugh, which came out like a combination snicker and snort from a clogged sinus passage. I should have remembered to smack him when we finished, but didn’t.

Someone in the garage turned off the radio, stopping the Nashville sound.

“Elrod, my friend, you’re under arrest,” I said.

“You just committed a double negative in public. If you didn’t do nothing, you must have done something. May I take that as an admission of guilt?”

“Huh? Do whot?” He was almost gasping.

“Elrod, son, you have the right to remain silent. I suggest you avail yourself of that right before I feel compelled to flatten your head with a brick.”

“Hey now, don’t go gettin’ mean an’ hateful on me, I really didn’t do nothin”.

“Pal, you haven’t seen hateful yet,” I said. “We’re only having a spirited conversation here. If you see me call in a helicopter or break out a field phone with little alligator clips attached to wires, you may infer I’m going to get nasty.”

I heard Junior giggling behind me. I should tranquilize him the next time we go on an arrest.

When he stood, I gave him a push and moved him up against the wall behind his desk. Just to the left hung a two-foot-tall calendar showing a girl in a bikini, holding a gallon can of anti-freeze, standing next to a shiny black Mustang with the hood raised.

“Assume position one, Elrod. Hands on the wall and walk your feet back some.”

Elrod seemed familiar with the steps to that dance. I took hold of his belt and backed him up even more, and then I used my right foot to spread his legs wider.

“I’m going to search you now,” I said. “Is there anything in your pockets or on your person that is a weapon or might cut me, stick me, or in any other way piss me off?”

“Do whot?” he croaked again.

“Now listen carefully, Mr. Swaggerty, these are not multiple choice questions, just a simple true or false. Do you have a weapon or something sharp on your body?”

“I got me a folder on my belt—that’s it, it ain’t concealed.”

I removed a cheap knock-off of a Buck lock-back knife from a beaten-up leather pouch on his belt and handed it to Junior. I finished patting him down, put cuffs on him, double locked them, and brought him back to the position of attention.

“Whot am I charged with? I got a right ta know!” he crooned.

“Larceny by inveiglement—four times and scheme to defraud.”

Obviously, vocabulary hadn’t been one of Elrod’s favorite subjects.

Please click HERE to find Heroes and Lovers on Amazon.