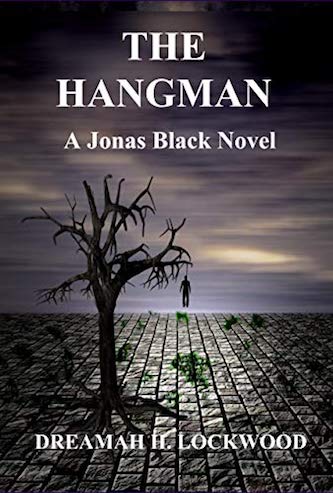 It is a race against time to identify and stop a madman who enjoys killing those he deems guilty. Read an excerpt from The Hangman.

Detective Lieutenant Jonas Black knows there’s a never-ending supply of monsters in the world. Another such evil is loose in his town, per his psychic girlfriend, Morgan Jansen. Already, too many have died. He must find the killer to stop the madness.

Morgan hates the strange abilities her murdered twin, Marilyn Heddrix, bestowed upon her when she was saved from The Stone Killer’s wrath. Now, she receives muddled images and hears things she’d prefer not to know. In her mind, a violin plays sad music, followed by the whimpering of a child, mixed with the violent rage from a man wanting his overdue justice. Without knowing vital details, all she can do is warn her lover, Jonas, of the evil which is coming.

This time the monster wants his revenge. And, he’ll dish out his punishment on the people who should have protected him and others. When a well-known defense attorney is found murdered at his home in the affluent Broadmoor area of Colorado Springs, Jonas knows the monster has arrived. He will not stop until he has punished all he considers guilty. And this killer is well-trained leaving nothing behind to identify him.

Jonas and his team discover five other men, from Florida to California, who have been murdered in the same manner. The first three victims are connected to three local Vietnam vets whose relatives did not receive the justice they deserved at the hands of the judicial system. But, they all have alibis for the time of the murders.

Once again for Jonas, it is a race against time to identify and stop a madman who enjoys killing those he deems guilty before he can set his sights on anyone else.

“Pleaseeeeeeeeeeee,” the man begged.  “I was only doing my job.”

His arms were pulled above his head and secured by a rope at the wrists.  He hung from the thick limb of a cottonwood tree, which kept his feet from touching the ground.  The pain shooting through his shoulder joints was excruciating, plus the heavy leg weights held each foot in place, preventing little movement.

A scream of terror started when a glint of light flashed on the knife’s curved blade but was cut off by vomit.  Both eyes began to roll back into the victim’s head when his pajama bottoms were jerked down to the knees, and a cold hand grabbed his testicles.  Again he tried to scream but passed out never to wake as the sharp, curved blade swung downward.

Task completed, the killer gave a cold smile, then walked away, leaving the man hanging in the frigid night air.  He paused before climbing into the vehicle to take a deep breath of satisfaction.  Instead of a crisp mountain breeze, the soft wind carried the odor of death and blood mixed with rotting vegetation from another time.

Lieutenant Jonas Black hated the sound of his buzzing cell phone at that moment.  The bright red numbers on the bedside clock shouted one-forty-five in the wee hours of the morning.  Only moments ago, he’d been snuggled close to Morgan Jansen’s warm back, her naked body curved against his.  Then the damned thing went off and jarred all sleep away.  With a long arm, he reached out and grabbed the blasted thing from the nightstand and put it to his ear.  At the same instant, Morgan sat straight up in bed.

“Piss, shit, damn, hell, sombitch, fuck,” burst out of Morgan’s mouth, then just as quickly she settled back on the bed, and closed her eyes.

“Yeah,” he growled and looked over at the woman.  Not one to cuss, Morgan had only recently started this run of expletives when something caught her by surprise or in an agitated state.  The whole thing had begun after she was rescued from being abducted by the Stone Killer.  Jonas wondered if the cussing had anything to do with Morgan’s deceased sister, Marilyn, the Stone Killer’s first victim?  Not once had she’d mentioned anything about the abduction, or acknowledged remembering anything about that day.  And, he didn’t push her to remember.  In fact, he didn’t want to recall anything about what happened.

Jonas turned back to the phone.  At this hour, even Detective Addison Clay sounded groggy.  “Sorry to wake you,” Clay said, “but we’ve got a body.  And you’d better wear a coat.  The temperature is close to freezing, and the wind-chill is in the twenties.”

“Where?” Jonas asked.  They had just wrapped up three homicide cases, a shooting at a local bar, a drive-by, and a domestic violence murder.  Just what the department needed, another one.  With each passing day, it seemed as if people couldn’t wait to kill each other.  Perhaps this would be an easy one to solve for a change.  But then, no murder was easy.

“You’re not going to believe this lieutenant,” Clay said.  “The crime scene is at Albert Sheehan’s house,” he hesitated, then “The first responder isn’t positive, but believes Sheehan is the victim.”

“Oh, crap!”  That bit of information made Jonas sit up, swing his legs over the side of the bed and plant both feet on the cold wood floor.  He’d guessed right.  This one was going to be a shit storm.

“I’ll be there shortly,” he growled, ended the call, and immediately pulled on clothes, shoved feet into socks and boots, grabbed his gun and holster, and headed for the door.  Only to stop and returned to the bedroom, leaned over and planted a kiss on Morgan’s cheek.

“You’ve got a body,” she muttered, eyes barely open.  “Be careful, it’s a bad one,” said, and drifted back to sleep.

“Okay,” Jonas answered, then pulled his down jacket from the closet, Stetson from the hook by the door, and rushed out.  He stood on the porch for a second to pull on the coat and stare at the mountains.  The dead guy wasn’t going anywhere.

Few house lights broke the darkness.  Most people were still asleep, or for the night owls, still out partying.  Hell, he thought, why did murderers pick the middle of the night to commit their damn crimes?

Please click HERE to find The Hangman on Amazon.