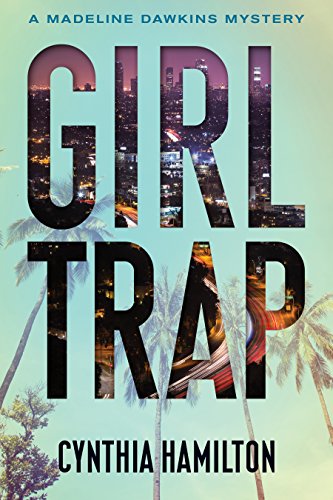 Madeline’s unique blend of savvy, intelligence, grit, and intuition help lead us through a labyrinth of danger. Read an excerpt from Girl Trap.

Appearances can be deceiving. And in Southern California, where the sun shines almost every day and make-believe has its own industry, it’s hard to tell what is real and what is merely illusion.

But it doesn’t take long to discover there’s nothing ordinary about the disappearance of two beautiful sisters from Minnesota and an estranged heiress who has never touched her eight-figure fortune.

While Madeline’s partner, Mike Delaney, heads down to Los Angeles to search for his cousin’s vanished girlfriend and her sister, Madeline heads to San Luis Obispo in hopes of picking up a twelve-year-old trail at a Catholic boarding school.

Their separate pursuits lead them into a world where a frightening reality hides behind a glossy veneer.

With several lives hanging in the balance, Mike and Madeline are faced with daunting odds and ruthless criminals who will kill to keep what they have taken.

Madeline felt her way through the darkened room, the dank odor of the confined space making it hard to breathe. The rough cinderblock wall was rubbing her fingertips raw, but she didn’t want to let go for fear of floundering again, being forced to crawl until she hit something. If she stayed along the wall, sooner or later she would come across something, hopefully, a door or hallway, a window, anything.

From behind, she heard the creak of rusty hinges and the sharp scrape of heavy metal against concrete as a door opened, casting an arc of dim light almost as far as where she was standing. She backed farther into the shadows, her heart flailing against her chest.

“Madeline…game’s over. Time to stop playing hide and seek.” Madeline felt herself grow rigid at the sound of Lionel Usherwood’s voice. “She’s in here, Steven—I can smell her. Your ex-wife has certain scent about her whenever she’s scared…have you noticed?” Madeline heard Usherwood sniff the air theatrically before breaking into a raucous laugh.

“Quit the comedy routine and go get her, Lionel. This whole mess would’ve never happened if you had disposed of her like I told you to.”

Hearing the cold, sub-human tone in her ex-husband’s voice sent piercing currents of fear throughout her body. She continued to back away from the light, scaling along the wall with her left hand until she smacked into an adjoining wall. Terrified, she pushed away from the first wall and took small, cautious steps, her hands guiding her as she inched along…to where? She had no clue. And what was the point? They knew she was there. It was only a matter of time before they captured her again.

The voice of a third man…Rick Yeoman?…could be heard, issuing commands. A second later, two Rottweilers scrambled into the room, snarling and growling, their nails skidding on the damp concrete floor as they fought for traction…

Madeline bolted upright, her chest heaving, her body damp with sweat. She panted hard as her mind tried to bring her out of the dream and back to reality. The feel of a cold, moist nose against her arm made her jump and cry out.

“Oh, it’s you, Charlie,” she muttered, weak with relief as she patted her huge protector on the head. When she had recovered her wits, she turned on the lamp next to her bed. Her eyes roved cautiously around the room until she convinced herself she was safe in her home, and that the bad guys in her night terrors were either dead or imprisoned.

She forced herself to take deep breaths as the ordeal in the basement dissolved, until at last she felt steady enough to get out of bed. Pretending to be more confident than she felt, she got to her feet and grabbed her robe, reassuring Charlie with several strokes on his large head that everything was all right. Still, she made a cautious inspection of all the rooms in her small house and checked her security equipment. Once she was satisfied that no one was trying to kill her again, she set about making Charlie’s breakfast after she turned on the coffeemaker.

As she sipped her coffee, she wondered—not for the first time—how much worse it would get if her ex-husband succeeded in gaining early parole. The only way she’d managed to hang on to her sanity was to reject the prospect outright. Surely, with the multiple counts he pled guilty to, no parole board would release him after only serving three of his twenty-year sentence, which in itself had been a gift in her opinion. The fact that she managed to survive his attempt on her life was the only thing that had saved him from a premeditated murder charge, on top of everything else.

She stroked Charlie’s head as she tried to convince herself that soon the ordeal of having to face Steven again and his possible release from prison would be behind her. Her thoughts had become an endless loop of arguments against turning him loose on the public, and her in particular.

“He won’t get out,” Madeline said out loud as if that could dissolve her fears. Instead, it made her realize just how much Steven had managed to get back into her head. “It’s going to be okay, right Charlie?” she said as she got up and took her cup to the sink.

It didn’t help matters that she was about to separate from her new companion. Charlie had been a comforting presence, especially after the night terrors began. She toyed with the idea of hanging on to him at least until the hearing was over, but she felt her former employee needed him more than she did. Whereas Madeline had thrown herself into her work as a means to put the ordeal behind her, Lauren was so traumatized, she only left her apartment for doctor and physical therapy appointments.

For the umpteenth time, Madeline thought about seeking help from a therapist, though the idea still seemed distasteful to her. Why would I want to burden anyone else with my horrors? she thought, staring out the window at the rose-tinted clouds heralding the sunrise. The world has enough nightmares to contend with as it is.

As she washed her coffee mug, she knew she would keep her own counsel. It was best that way. She would work through the mental scarring Lionel Usherwood and Steven Ridley had inflicted on her. To do so would be her own sort of triumph.