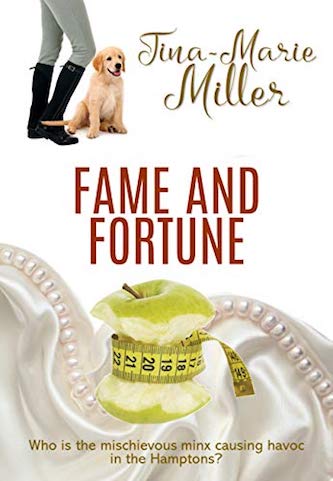 Escape with this heart-warming and uplifting cozy women’s fiction.

Set against the alluring Cotswold countryside, the Hamptons series offers an intoxicating blend of intrigue and romantic shenanigans.

When the renowned weight loss guru Georgina Fame makes her glittering entrance in the Hamptons, she unwittingly ruffles more than a few feathers. But behind all the glamour lies a dark secret. How will an encounter with the past shake Georgina’s carefully built confidence?

Diane Fortune hires the popular soap actress Camilla Barrington-Smythe as choreographer for the Hamptons dance troupe. But fame-hungry Camilla doesn’t receive the recognition she deserves. What happens when she allows her insecurities to distract her?

Francine Dubois is officially the new Senior Buyer for the exclusive Magnifique Madame range of opulent lingerie. She’s also the right-hand woman to the debonair Richard Hambly-Jones. Or so she believes. When she arranges a cozy tête-à-tête with her happily married boss, things don’t go quite to plan. Has Francine taken her demands a step too far?

Shocking secrets are set to be revealed in this seductive tale of glamour, greed, and redemption

Stepping out into the fresh air, Jonathan took a deep breath. Despite Dr Anderson’s concerns over his health, the thought of Lizzie’s impending invitation to Charlotte had lifted his spirits. He knew that most of the villagers thought his wife was nothing more than a spoilt bitch with their big house, lavish lifestyle, and affluent friends, but that wasn’t the Charlotte he knew and deeply loved.

That Charlotte was the one he was desperate to get back again – at any cost.

‘Hello, Barnaby.’ That voice got him every time and he straightened up in his seat in an attempt to quell the fluttering sensation currently surging through his stomach. ‘I’m super pleased we managed to get things moving so quickly, so thank you for that.’

‘It’s my pleasure,’ he enthused in response. In fact, Barnaby was super pleased too; not only had the sale of the lucrative Swinford St. George Golf & Country Club afforded him the opportunity to invest in LC’s Bistro and Wine Bar, but he also had his eye on another property he hoped to invest in.

‘I was calling to ask if you could furnish me with a few of the local trade contacts you mentioned? I’d like to get things moving as soon as possible.’

‘No problem,’ Barnaby replied. ‘Actually, I thought you might ask so I’ve already put a list together for you, which should arrive in your inbox around about… now!’

She let out a throaty laugh. ‘My, that was quick work – and there was me hoping I could entice you to join me for lunch and bring it with you.’

Barnaby silently cursed his overzealousness, his mind abuzz. ‘Well,’ he cut in, ‘I had been meaning to call you. Lyndon Westbrook popped in yesterday and left several framed photographs of aerial shots he’d commissioned over the years. He thought you might like to display them as part of the club’s history.’ Barnaby wiped his brow, impressed at his quick thinking, knowing full well that the pictures had been sitting there gathering dust ever since he’d taken on the commission.

‘Well, it’s a date then,’ she replied without hesitation. ‘I look forward to seeing you later – shall we say about 1 p.m.?’

‘Perfect,’ Barnaby replied, smiling to himself. He certainly didn’t need asking twice. That would give him just enough time to drive over to the Hamptons to meet up with the others before heading back to Swinford St. George.

Who’d have thought it – me, Barnaby Rose, having lunch with her!

‘Aye, aye,’ teased the desk sergeant as PC Laura Benjamin stepped out from the locker rooms and into the custody area that all staff had to walk through before leaving Midford County Police station, ‘don’t you scrub up well?’ Sergeant Phil Harris was well known as being a bit of a lothario with the ladies, and he certainly had the good looks to match: short dark hair, huge brown eyes framed by long dark lashes, and a charming smile to boot.

Laura couldn’t help but blush as she passed the desk.

‘Where are you off to? I might swing by later!’ He laughed and a couple of nearby colleagues joined in.

‘I keep telling you, Serge – over fifties is on a Thursday.’

At that a host of guffaws rang out. Even Phil was chuckling.

‘Well, you just be careful out there,’ he winked, ‘and if there’s any trouble, give us a call.’ He buzzed a smiling Laura out of the station and she made her way to her car.

She didn’t usually enjoy getting ready for a date straight from work but her new boyfriend wanted to meet up earlier than they’d originally planned so she didn’t have time to head home first.

Once in the car she checked her appearance in the rear-view mirror. She wasn’t one to wear a great deal of make-up in general, and having been blessed with great skin she needed no more than a few sweeps of the blusher brush and a flick of eyeshadow to enhance her hazel eyes. Finally, she applied a coat of pink lipstick and smoothed her brown, shoulder-length hair into place.

As she drove towards Chipping Melbury she couldn’t help thinking how dire her love life had been over the past few years. At 29, she’d hoped to have been heading towards marriage by now. No such luck! She’d dated a few guys off and on – mostly from the force – and more recently had enjoyed quite a few nights out with Matt Hudson, but he appeared to be stuck on an ex, which had stopped her from taking things any further.

Please click HERE to find Fame And Fortune on Amazon.