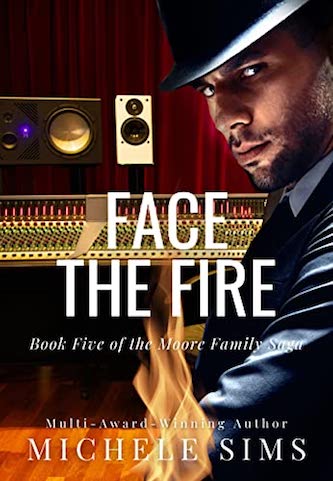 The City of Angels is set ablaze when fantasy and reality collide on a journey filled with fiery passions, love, and betrayal.

Miles Moore will stop at nothing to make his dreams of a music empire a reality.
Fame. Secret powers. Fortune. An unrelenting drive for success. He has all the building blocks he needs.

Except for one thing… and the woman he loves holds the keys to his future.

Bella Moore, the Chief Marketing Officer of their growing company, wants nothing more than to help her husband realize his goals. But for her, the choice of family over business is a no-brainer. After discovering more about the competitive nature of the music industry, she fears a growing feud with their competitors will result in bloodshed.

In this romantic and suspenseful tale filled with the power of magic and ignited by the threat of revealed secrets, Miles and Bella discover that the price of their shared success is too high if it means endangering their lives and the lives of those they love.

Miles ‘Ari” Moore, CEO of AriMusic, understood that in the City of Angels, it was business before pleasure. “Work hard, play harder,” that was his motto. He and his wife Bella were out on the town looking forward to having some fun.

“I didn’t realize how much I needed this night.” Bella leaned across the driver’s seat and placed a kiss on her husband’s cheek. Waiting for the stoplight to change, he interlaced their fingers and raised her hand to his lips, caressing it with warm kisses.

“You deserve some time to relax. It’s been a while since it was just the two of us.” Miles’s chest warmed as he gazed into her soft brown eyes. “Hard to believe that last year we were a young, recently married couple, and now we’re the parents of two beautiful babies.”

“A true labor of love.” Her smile lit up the night. Their infants, Ashe and Ariana, turned six weeks old yesterday.

“Tonight, it’s all about you, babe.” Slowing down at the intersection, he made a left turn, heading toward downtown LA. “How was your dinner?”

“Fantastic.” She reached for the radio to turn down the volume. “How did you get a reservation? I heard that place was booked for months.”

“It was, but I know people.” He winked, then reached over to touch her thigh. “Nothing but the best for you.” Gently stroking her smooth skin, he took in a deep breath and smiled as his body heated with desire.

“Are you sure you want to go to The Club?” His fingers inched beneath her skirt, causing her to look down. “Just checking things out.”

Nodding, she placed her hand on top of his. “All the parts are present and accounted for. My doctor gave me the green light.” She winked. “I’m ready for action.”

“All types of action?” He wagged his eyebrows. “Our sex drought while you were on bedrest and after having the twins was brutal.”

“The drought is definitely over.” She smiled. “I’ll reward your patience later, but for now, Mama wants some time on the dance floor.” Turning away, she glanced at the traffic through the passenger-side mirror.

“Keep your eyes on the road. It’s busy out here tonight. We have a lot to celebrate, and I want to get there in one piece.” She shimmied her shoulders.

“While on our club crawl, we can check out Lil’ Pharaoh’s show.”

Pharaoh Little, ‘Lil Pharaoh’, was one of the first artist signed to their record company, AriMusic. A music phenom, he had come to Miles’s attention as a young teen. Unlike other record companies, Miles had given Pharaoh’s mother, Elizabeth Little, his personal reassurance that he would protect him from predators and vultures that often found their way into the circles of young stars.

“We were able to book him at one of the premiere clubs downtown at the last minute.” Miles gripped the steering wheel. “I want to see how he handles a different crowd, and I could use your help marketing him. He has been more than I bargained for.” He sighed. “Lately, it’s one problem after another. I’m also not amused that he’s crushing on you.” With a quick glance at the rearview and side mirror, he moved into the fast lane.

“He’s young and still trying to find his way in this business.” She shrugged. “You realize Pharaoh is a natural flirt who plays around with everyone.”

“I hope you’re right about him. His acting-out is beginning to concern me.” He took in a deep breath. “After we check out the clubs, we can get back to honoring you, my gorgeous wife, who has blessed me with two of the most amazing babies on the planet.”

Placing a hand above his on the stick shift, she rubbed her thumb across his knuckles.

“I’m biased, but I agree.” She looked ahead at the traffic. “We’ll find out how amazing they are after their next check-up. It’s clear that both of them have your medical condition, but they’re still investigating the effect of the condition on their development.” Out of the corner of his eye, he noted her lips tightening and shoulders slumping against the leather seat.

If you think it’s hard hearing about it, try living with it. Miles peered at the rearview mirror.

Miles had an extended stay as a child at the National Institute of Health in Maryland to investigate a high fever that placed him in a coma. The medical team and research consultants discovered that as a result of a genetic condition, he was able to create fireballs, withstand high heat without burning his skin, and tolerate higher than normal smoke inhalation without damage to his lungs.

“Don’t worry.” His mouth felt like dried cotton as he squared his shoulders with an air of confidence. “We’ll handle it together.”

“I’m not worried, and sorry for airing my thoughts.” Resting her head on his shoulders, she rubbed his chest. “You’ve gone to great lengths to make this a pleasurable night. We haven’t done a club crawl in over a year. It should be fun.”

Please click HERE to find Face the Fire on Amazon.