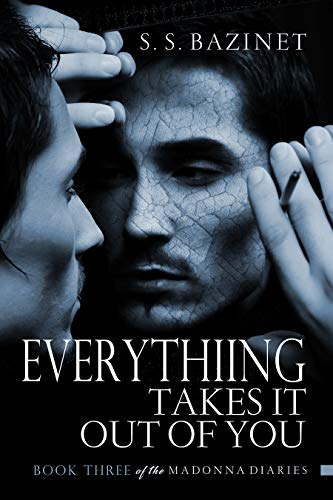 Brothers come together to not only fight a deadly virus threatening the world and keep Dory alive but to also heal their childhoods.

THE MADONNA DIARIES series is the story of two brothers trying to survive during a deadly pandemic. Dory, a very successful artist, is an introverted, tortured soul who paints Madonnas as a way of coping. His brother, Milton, a doctor and researcher, is a humanitarian who’s trying to find a cure for the virus that’s consuming the world’s population. When Dory is infected with the lethal virus, they come together to not only fight the disease and keep Dory alive but to also heal their childhoods and to find the faith and happiness that’s missing in their lives.

In book three, Dory’s life continues to shift in unexpected ways. After having a disease that kills without exception, he’s the lone recipient of a scientific miracle. In the midst of his triumph over a deadly virus, he also discovers that he has a chance at love. Crystal Hutchins, a doctor who helped to care for him, lets him know that she would like to explore a romantic relationship.

In a daze of wonderful possibilities for his future, Dory is broadsided by a deeply disturbing event. He finds out that his father has been infected by the lethal disease that nearly killed him. In the days that follow, both Dory and his twin brother, Milton, try to find a way to help their parent. Dory, who’s the sensitive artist, wants to be there as a caregiver, while Milton, a doctor and researcher, hopes to find a cure.

Both brothers are dedicated, but will either of them succeed in their mission? Their father, Howard Hayes, has always been a bitter, angry man with an explosive temper. How will he react when the virus triggers even more violent behavior? How will Dory cope with a father who’s always hated and abused him? Can either father or son find a way to reconcile?

Sampler: Everything Takes It Out of You

THE SECOND TIME that I saw Dad, I didn’t cry. I remembered all the times my father had told me to act like a man. And men don’t cry, especially Hayes men. Dad was being held in what looked a lot like a room in a hospital with lots of medical equipment. Only in this setting, he was strapped down to his bed. A neck collar kept him from raising his head.

I told myself that no matter how bad Dad looked, he was still “in there” somewhere. I tried to pretend that we were both “acting” our parts. I was acting like Milton, the twin Dad is proud of, and Dad was doing a great job acting like a blood-thirsty maniac.

I don’t think he recognized me at first. He glared at me with bulging eyes. Red-faced, he fought the restraints. After Milton’s warnings, I hoped those restraints were strong enough. Dad was making his wishes known. He wanted a piece of me, and I mean that literally. My imagination is good at coming up with scenarios, and I got the image of my father hunched over me, feasting on my—

I paused, wondering what part of me would be best to feast on. I’m so thin, there’s not much meat on my bones. So maybe he’d simply start sucking my blood and keep going until he burst. Then I had another weird thought. What if he killed me, but my blood cured him afterwards? Wouldn’t that be something? He’d think he’d killed his pride and joy, the son he loves.

I was brought out of my daydreaming when Dad let out a scream. It was so shrill that I jumped a good foot. I’d heard my father yell and shout at me with powerful lungs, but I’d never heard him scream before. There’s a big difference. One type of sound comes from a person whose anger is peaking. I had a feeling that the other kind of sound, the scream, came from Dad’s physical vessel. I think I’m right because when I looked at my father, his eyes seemed kind of dazed, like he didn’t know where the sound he’d made came from.

I understood his confusion. When I was in the throes of the disease, I was shocked by the sounds my body made. They came out without my permission and actually scared the heck out of me. I couldn’t let Dad’s shrieks put me off. I edged my way over to his bed, hoping to connect with the part of Dad that still had reasoning power. “Dad, it’s Milton, remember? Remember your son?”

Dad stared back at me for a long moment, then turned his head and started cursing. I was afraid he knew the truth, that I was Dory. But, after more cursing, he finally looked back at me. “Mil . . .ton?” he gasped.

There was so much pain in the way he said the words that I grabbed one of his bound hands with one of my gloved ones. “Hang in there, Dad,” I pleaded back. “We’re going to help you.”

His hand closed on mine with a crushing force. There was so much pressure that I felt like my bones might break. But he yelled again, and I couldn’t worry about my hand.

That kind of heart-wrenching request tears at a person’s soul, demanding that you render assistance. But I had to ignore it. I had to believe that Milton would find a cure. I also had to retrieve my hand before it was crushed. It wasn’t an easy task since I’m still weaker than I’d normally be. It took all I had to finally free myself. I worked my fingers, relieved that they could still function.

Dad’s features morphed. His pleading eyes turned bright with a seething hatred. I’ve always been the target of my dad’s animosity. In return, I hated him with the same passionate intensity. None of that mattered now. Standing over my father and knowing he’s in such unbearable pain, all hostility quickly faded away. A second of time slowed, and the moment felt like it might never give way to another. All the while I was wishing I had one of my plastic Madonna keychains to hold onto. I finally understood, and more importantly, felt its significance. The keychain’s tiny Madonna image represented love and tenderness when the world felt too horrible to face.

I stumbled over to a chair, wondering how to keep my emotions in check when Dad started screaming again. His tormented shrieks punished my ears and had my heart racing. It was like being tortured myself. That’s the price of empathy. You feel another person’s pain so acutely that it can be agonizing. I had to rethink what I’d said to my brother. I’d claimed to be tougher than Milton. It’s a lie. My brother, who’s also empathic, had to sit with me for weeks on end when I was suffering. I can’t imagine how he did it.

Please click HERE to find Everything Takes It Out of You on Amazon.