Sampler: The Enigma Beyond by Charles Breakfield and Roxanne Burkey 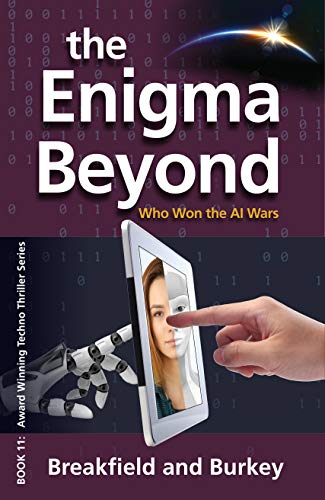 Can humanity take back control?

What happens when technology outruns our humanity?

Humans continue to give their decision making over to Artificial Intelligence. Or, was it simply confiscated? Computers are delivering manufactured choices to each person via their ever-pervasive personal devices. The seduction of mankind is eminent unless our champions can stop them.

The R-Group, with their own next-generation youth, are poised to take on one of their most complex adversaries, supercomputers run by greedy powerful technological geniuses. The training for the new members of the R-Group is live, in the form of a real-world cyber assault crisis. ICABOD, R-Group’s supercomputer, is their best weapon for this battle.

With corporate self-discipline gone and the power of U.S. Congressional oversight crippled, the dominance of the technical oligopolies has risen to dictate their terms.

MAG, the consortium of global technology predators, have come together to bring their insidious plans to fruition using humans’ desire for the easy and effortless lifestyles, even as it steals their freedoms. For groups caught in the cyber crosshairs, time has already run out. The social media noise blinds humanity to what is happening. MAG uses it to seize control of politics, healthcare, finances, and defense systems.

Award-winning authors Breakfield and Burkey take readers, in their 11th book in The Enigma Series, on a one way trip to keeping or giving up their most precious human quality, the freedom to choose. No one saw it coming when they built computers to ease their work. Where are the guardrails to protect humans from giving up too much? Can humanity take back control?

You determine who wins in the AI Wars.

The four of them visibly cringed at the dressing down they were receiving from the Congressional Hearing Chairwoman, Senator Parsnips. Not because of the pointed sarcasm, which was a blistering hot, steaming torrent, but more so due to the overamped volume on the microphone. It was her favorite technique during closed hearings, designed to intimidate and cower those being investigated. Following the second tirade, M calmly pulled out a package of foam earplugs to deal with the irritating sound, then passed a set to the others.

Annoyed that her diatribe was quite literally falling on deaf ears, Parsnips commanded, “You four are here to answer questions based on the allegations of collusion and monopolistic business practices. Your track record of driving small competitors into bankruptcy, as well as behind-closed-door acquisitions, has devolved into a sterile technology landscape for businesses and consumers. Your predatory business activities will end with this committee.”

F, somewhat irked but also frightened, countered, “Madam Charwoman, you can’t be serious! We’ve played by the rules of free enterprise and are at the top of our respective fields. As a rule, we don’t go out of our way to crush anyone. If it makes sense to add a service to our portfolios, we do. This is driven by demands of our customer base.

“We serve them and provide many free services so our technology can be enjoyed globally. How is it better to have a bunch of smaller companies offering services for a fee or to collapse due to poor business practices, compared to our broad support?”

Parsnips growled, “Pronounce my title correctly! It is Madam Chairwoman. Based on your insolence, perhaps we should direct the DOJ to have your colossal social media machine unbundled to open up competition.”

Snarling and glaring at them each, in turn, she continued, “G, you and the others needn’t look so smug about being dismembered for the good of our country! We are carefully studying the impact to this nation’s competitive playing field, and everything points to you four apocalyptic technical leaders, who seem to possess no moral compass!”

G politely responded, “Our AI-enhanced supercomputer modeling does not agree with your approach. Frankly, dismembering our collective organizations will not only cripple our technical lead globally but will significantly reduce the tax revenue that the government currently enjoys.

“The EU wisely saw this and passed various bogus laws that allow them to levy fines on our companies. Regardless of the ability to truly comply with these consumer protection laws’ they do generate large fines in the billions which the EU gladly consumes. We see it as the cost of doing business, and they pocket the fines for the good of the average consumer, although we can’t substantiate that any of the fines ever got disbursed to any EU citizens.”

A jumped in and added, “Our AI-enhanced modeling confirms what G stated. You would be better served, or the country will be better served, by also enacting excessive, uh…regulatory guidelines to protect the consumer as the EU did to cover government spending programs more effectively. That way the DOJ won’t have to figure out how to break up our organizations or perform the arduous audits that would then be required.

“You get to flex your political muscles during this reelection period, and the government just signs a few new bills to demonstrate who is in charge to your voting constituents. We, in turn, will chalk it up to the cost of doing business, and everyone moves on.”

Parsnips, with a sour puss and pursed lips, looked shocked. “You think this is all political gamesmanship? Let me point out that AT&T once said they were too important to be broken up, but Justice carved them just like we are going to do with you.”

M calmly recalled, “Madam Chairwoman, AT&T has reconstituted itself, because all the forced break did was cause undo chaos in the marketplace. In our business world, bigger is better and allows us to deliver goods and services at an optimized price point that helps consumers.

“Still, your concern for the country’s well-being is so noted. To that end, we must state that we are also committed to our country’s welfare. It is unfortunate that you feel we are not a positive benefit to humanity, but we have stopped resenting that narrow-minded view. We intend to use our considerable resources to make sure that your shortsighted approach to being reelected, based on your myopic perspective of what is best for the consumer, will not go unchallenged. With that, I believe you are out of time for this weighty topic. Good day.”

Parsnips was still furiously pounding her gavel as the four simply marched out of the hearing.

Please click HERE to. find The Enigma Beyond on Amazon.