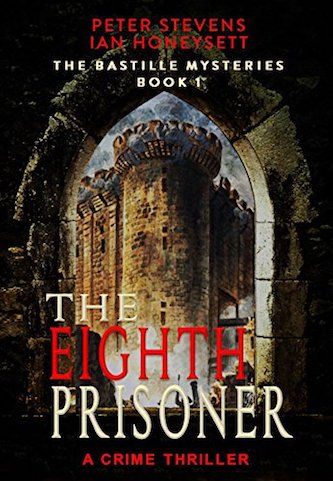 They struggle against time and a ruthless hidden enemy to solve a series of murders.

A desperate man stalks his faithless wife, but all he achieves is getting his own throat cut.

This is the first of a series of murders as Paris explodes into the French Revolution.

The Eighth Prisoner is a Standalone Historical Crime Thriller that proves murder and murderers are not surplus to requirements, even in the Age of Terror.

Side by side with events such as the Storming of the Bastille and the Women’s March on Versailles, a conspiracy weaves its way through French society at the highest and lowest levels.

But who are the conspirators and what are their aims?

A cynical, possibly corrupt but brilliant Inspector of Police.

A dedicated, but flawed Priest.

And a Young Woman, coming of age as the world around her changes forever.

Together they struggle against time and a ruthless hidden enemy, to solve an increasingly baffling series of murders.

He almost fell as he stumbled over an object left on the stair and with a shiver realised that, with no banister, it was a sheer drop of ten metres to the bottom. “I’ll have to be damned careful on the way down,” Jacques thought to himself. A second thought thrust itself into his mind. “If I’m coming down.”

At that moment, a quarter moon appeared through a narrow window on his right. Just for a moment it lit up the way ahead on Jacques’s left. At the end of the corridor was an old wooden door. It was shut. But a faint light shone through the bottom of the door. That light continued as a cloud obscured the moon once more.

Jacques reached the top of the stairs and was relieved to walk towards some light at last. He reached the door and knocked hard on it.

“Professor,” he called out. There was no reply so Jacques pushed the door open (there was no door-knob). Screwing up his eyes he looked towards the single candle burning in the corner.

Next to the table on which the candle spluttered was a chair. In that chair was a man. It was Albert. Jacques’ eyes brightened and he walked towards the seated figure. “Professor,” he repeated. When he reached the figure, he looked down at his friend’s face. He seemed to be grinning in the candlelight. Jacques looked closer. The face was not grinning but was in a grimace of agony. Around the neck was a wire necklace. Albert was dead. Jacques was about to let out a scream of terror when once again a familiar smell of mint assailed his nostrils. He knew instantly what was going to happen next.

Jacques awoke again to the familiar ache in his head. Adjusting his eyes to the gloom he saw the dead body of his friend lying next to him.

“Poor Albert,” came a voice from behind him. “He actually knew nothing, but it took him half an hour to tell me that. A very painful half an hour for him, unfortunately.”

Jacques tried to get up to confront his captor but immediately realised he was bound by ropes to the chair. “Who are you, what do you want?” he demanded.

“The first question is irrelevant,” the voice replied, “but I can help you with the second. What do you know and more importantly what have you told anyone else?”

“What do I know about what?” Jacques almost screamed, his hands working ineffectually at his bounds. “Just a minute, you’re the one who came to the Bastille with Mathilde. You killed her, didn’t you, and you killed Charlotte.”

“Ah yes, poor Charlotte, she’d do anything for me and for what she thought was the cause of liberty, even allowing herself to be ravished by a rancid worm like you. She said it was the worst experience of her life. I’m sure it was, well, until a few days later when I killed her. That might have been even more unpleasant. Well, maybe not. A close-run thing I would say looking at you now.”

“Why…” Jacques croaked in agony.

“Why?” the voice laughed. “Well as it turned out it was unnecessary. I wanted the keys to the lady Mathilde’s cell and, while you were asleep, drugged by the way, with the wine, Charlotte got an impression of all of your keys. I told her we were going to free some prisoners of the state and she believed me. As it turned out the mob stormed the Bastille before we could collect the keys from the locksmith to enable me to kill Mathilde. I improvised, as it were and completed my mission.”

Please click HERE to find The Eighth Prisoner on Amazon.