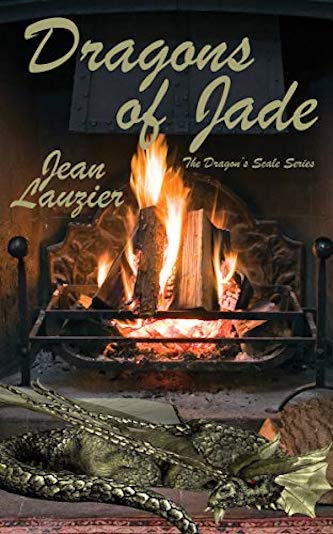 There’s no such thing as dragons.

Of this, Jade Delaney is certain. That belief changes when a dragon opens a door and summons her to the place of her birth.

There, Jade learns who she is and accepts the task to find and stop whoever is killing the dragons while avoiding the men hunting her.

Bevan Deveux has always believed dragons were just a tale to frighten misbehaving children. A chance meeting with Jade shows him just how wrong he has been.

Honor bound to repay a life-debt, Bevan must now balance his promise to keep Jade’s secret while riding with the enemy.

Jade never dreamed a dragon would sleep at the foot of her bed, and she hadn’t planned on falling in love, but it all feels so right.

Jade picked her denim backpack off the floor, swung it over her shoulder. “Have a nice weekend.”

“Think about it, Jade, you’re much too intelligent to be wasting your time like this.”

“I will.” She turned on her heels and strode from the room.

The classroom door closed behind her with a quiet click as she shifted the backpack filled with books. “That was fun, Jade.” She brushed back a strand of hair from her face. If she knew what she wanted to do with her life, she’d be doing it instead of being here. Her footsteps echoed down the empty hallway as the light grew dim. She gazed around. A single light shone from the ceiling, illuminating a small spot on the door leading from the building. In the light, an image shimmered on the door. Jade stepped in front of the door and gasped. She glanced around, searching the hallway, saw no one, and turned back to the door. Her backpack slid off her shoulder and thumped to the floor as she stared at the image of herself standing before Mr. Smithers’ desk. Reaching up, she tentatively touched the scene. Her fingers warmed as they merged with the image then chilled with contact of the metal door. The picture shifted around her fingers to show her dressed in a cap and gown, diploma in hand. Jade sucked in her breath. So she would graduate. But how could this be possible?

She glanced around the darkened hallway again but still saw no one. The image shifted and swirled. A man appeared next to her; a small boy joined them. Her image-self reached down, picked up the child, and smiled. The picture blurred, and Jade wiped a tear from her cheek. She would be a mother one day.

A breeze played with her hair as the wall beside the image shifted and shimmered. Another door appeared in the wall, wavered, and became solid. Jade ran her hand across the wood. Gazing around at the empty hall, she brushed a stray strand of hair from her eyes. She turned back to the new door, watched it shimmer as an image formed. With a gasp, she stepped back from the door shaking her head. “That’s not possible. There’s no such thing as dragons.” Jade swallowed hard, touched the dragon in the image. Her image-self stood before the dragon, hand extended.

The dragon turned toward her, met her gaze. It’s your choice.

Jade snatched her hand away and shook her head. “There’s no such thing as dragons.”

The dragon turned back to her image-self and blew a plume of black smoke. Jade stepped back from the doors and watched the smoke rise in the air and disappear. Her gaze rested on the first image. She reached into the image and touched the child. Marriage and a family, but did she want that? Jade turned to the wooden door and let her gaze rest on the dragon, then nodded and took a deep breath. “Even the dragon agrees.”

She pushed the door open and stepped into green. Green that shifted and moved. Her stomach churned with the green. Jade’s vision cleared, and she swayed a bit as the green came to a standstill. It turned into a grassy field and trees that stretched toward a clear blue sky. She looked around. A man stood in the middle of the clearing. His long dark hair was tied back, and he wore matching tan pants and shirt. A smile crossed his face. He held out a hand toward her.

“Thank you for coming. I am Draigh.”

Please click HERE to find Dragons of Jade on Amazon.