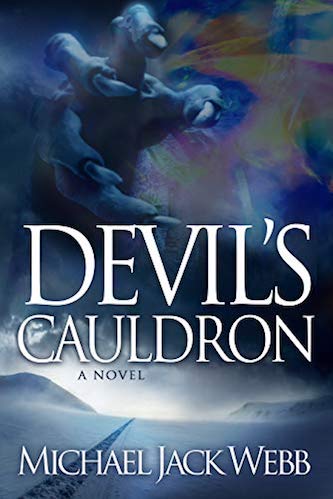 An expertly written Christian thriller with a phenomenal storyline, a sensational and electrifying novel.

A mysterious 10,000-year-old structure buried deep under the ice in the coldest place on Earth. A secret research facility using advanced technology developed by Nazi scientists. Cryptic messages sent to the FBI by a Mischlinge, one of Hitler’s Jewish Nazis, warning the world the Anunnaki, the Nephilim, are about to return.

Project Nimrod is close to success.

A dire warning, Beware the Devil’s Cauldron, catapults Ethan Freeman into another life-threatening journey full of action and adventure. Recovering from ensuring the Light Gate protecting the Angelic Prison known as the Abyss remains closed, he faces even more powerful enemies.

A Portal has been opened to an alternate dimension. A parallel universe. But the scientists intending to use it to achieve god-like powers have no idea the evil they’ve unleashed. Ethan must stop Project Nimrod.

If the former Special Forces Ranger fails, humanity will suffer at the hands of unimaginable evil as an ancient conspiracy unfolds.

If you like epic battles, angels and demons, and supernatural conspiracy thrillers full of suspense and mystery then you’ll love the riveting sequel to Infernal Gates.

Can Ethan count on the Archangel Michael to help him again? Will the only remaining Guardian survive?

Lieutenant Commander Robert Marsh had been a Navy Seal for over eighteen years. Since his SEAL training at BUD/S (Basic Underwater Demolition/SEAL) on the “Silver Strand” beaches of San Diego, he’d learned to ignore extremes of temperature. He was grateful for that intense training. Now more so than ever. Especially his time spent near Kodiak, Alaska, during his Extreme Cold Weather Survival training. Had he not endured those hellish three weeks in the Arctic with his fellow SEALS, he’d already be dead.

Although it was summer in the Crystal Desert, it was twenty-five degrees below zero Fahrenheit. Nothing unprotected could survive more than a few minutes in this arid, icy wilderness. That was the least of his concerns. He’d been the leader of a Top Secret, multinational team sent to this godforsaken, frozen wasteland at the bottom of the world.

The five of them had started out as the hunters. Over the past three hours, they’d become the hunted. The two German Commandos from the KSK, the Kommando Spezialkraefte, had been slaughtered first. The battle-hardened men had proven themselves repeatedly, first as part of the elite German Navy Kampfschwimmer commandos—Germany’s equivalent of his own SEAL heritage—then the KSK. They’d been the Communication Specialist and Medical Corpsman on his hand-picked team. The two commandos from the elite Russian Special Purpose Forces, or Spetsnaz, and Alpha Group OSNAZ, had died next. His heavy weapons and explosive specialists.

Their four lives and the few small blocks of C4 they’d carried, along with the team’s only Barrett M107A1 .50 BMG caliber rifle had been lost in the frozen white wilderness behind him.

Now it was up to him to finish the mission.

His stark-white winter HYVAT parka and pants were spattered with frozen blood.

Fortunately, none of it was his.

Less than ten minutes ago, he’d been standing behind the tall, muscular Russian, Oleg Tarasov, the team’s explosives specialist. Prior to the mission, Tarasov had told him over steaming cups of strong Turkish coffee that his first name meant “holy.” But there’d been nothing holy about that fierce warrior. The brutal attack caught them both off-guard. Unfortunately, like the others, none of Tarasov’s training, nor any of his extensive battle experience, saved the Russian from the seemingly invincible predator.

Marsh checked his remaining weapon, wrestling with the relentless cold. Any lapse in concentration and he’d never make it back to the underground lab he and the others had been assigned to protect. He’d lost one of his two personal weapons, the Heckler and Koch MP5 submachine gun, in the heat of the brutal attack taking out Tarasov and his partner, Dimitri. The beast had ripped the MP5 from his hands, bending it in half as if it were nothing but a toy plastic gun. He still had his Cold Steel “Recon Tanto” fixed blade knife strapped in a sheath attached to his combat chest rig. A Recon folder was tucked inside the map pocket of his parka. 18 Devil’s Cauldron

Thankfully, his loaded M1911 Colt 45 was in his right hand. Most “Team” guys favored the Sig Sauer semi-automatics—particularly the P226. A few carried Glocks, or the 9mm H&K USP pistol. Marsh brought his father’s M1911 for this mission. Like the P226, the semiautomatic pistol packed enough punch to bring any normal human being to ground with one hit anywhere in the center mass of the body. Avery Marsh had been among the first wave of Army Rangers to breach the cliffs at Point du Hoc on Omaha Beach during the Normandy Invasion. And the only man in his unit to survive the deadly D-Day assault. His dad died last year, a decade after his wife had succumbed to cancer, bequeathing his “good luck“ weapon to his only son. The M1911 kept Marsh’s father alive against incredible odds. He hoped it would do the same for him.

An eerie wailing snapped Marsh from his momentary reflection. Raising his head a few inches above his hiding place, he cautiously looked over the small ice ridge. The relentless, howling wind was whipping the loose snow and ice into a nightmarish froth. A whirling wall of frozen white flakes.

The unnerving sound came again. Louder this time. He’d only glimpsed the predator. Materializing out of thin air, it gutted Tarasov from chin to waist, after decapitating Dimitri, then swatting Marsh as if he were nothing more than a pesky fly, before vanishing. The beast is close. But where? Suddenly, he saw something. A snippet of a quote from John Milton’s Paradise Lost he’d memorized in college flickered and died inside his head: Black it stood as night, Fierce as ten furies, Terrible as Hell—Satan was now at hand; and from his seat, the monster, moving onward, came as fast. With Horrid strides; Hell trembled as he strode—