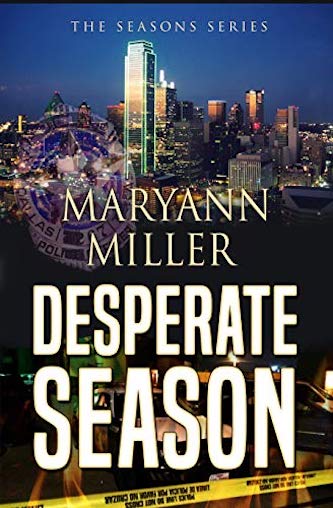 A frantic race to stop the influx of a nasty new street drug that is killing kids as young as ten.

Children dying is a cop’s worst nightmare. Throw drugs in the mix, and the nightmare gets worse.

Dallas Homicide Detectives, Angel Johnson and Sarah Kingsly, who are still trying to sort out their partnership, race to stop the influx of a nasty new street drug that is killing kids as young as ten.

Those kids should be playing in the park, not dying in it.

Who owns the streets of Dallas?

Can the detectives take them back before more kids die?

Sarah eased back to a comfortable lope a quarter of a mile from home, then slowed to a walk for the final block to cool down. When she’d headed out for her run at seven that morning, it had been cool. Now it was already hot. When was she ever going to learn? It wasn’t as if she was new to Texas and didn’t know how hot it could get in early spring. The big joke around the department was that there were only two seasons in Texas, hot and cold, but most of the time it wasn’t that much of a joke. There was none of that slow slide into spring that she remembered from her childhood in Tennessee. In Texas, you could be freezing your ass off one day and boiling the next.

Of course, if she’d come straight home instead of stopping for coffee at the convenience store, she would’ve missed the worst of the mid-morning heat. But then she would’ve missed the neighborhood gossip from Hussein, who owned the gas station. He spoke excellent English for an Iranian immigrant, and he liked it when Sarah hung around, even when she wasn’t on duty. He’d once told her she just looked like a bad-ass cop even in her jogging clothes, and that was enough to keep the bad guys away. Of course, he politely called her Miss bad-ass cop.

Pulling the neck of her t-shirt up, Sarah wiped sweat from her face, then dug the key to her apartment out of the pocket in her shorts. She reached out to insert the key in the lock, and the door moved slowly away from her. She immediately went on high alert, easing through the opening and glancing in. It took a moment for her eyes to adjust from the bright sunlight to the dim interior of the entryway, and in that moment, she mentally scrambled for a reason the door would be open that didn’t involve some maniac waiting for her. Since she had nothing for protection except her bare hands and a few keys on a key ring, she tried to convince herself that nothing was wrong. Perhaps she had inadvertently left the door open.

As soon as that thought formed, Sarah dismissed it. There was no way she’d left the door unlocked. Inadvertently or otherwise. She had never in her whole life forgotten to lock a door. Her mother had instilled the importance of security in Sarah the child by pointing out the crazy man on the next street who liked to go into people’s houses and take things. It was rumored that he took more than things, but her mother had never elaborated on that.

Thankful that her apartment was small, Sarah did a quick visual sweep of the living room and kitchen. It was hard to tell if anything had been disturbed. She wasn’t the neatest of housekeepers, so the living room always had a “tossed” look to it. A second look around and she noted that her TV was missing, and something else registered. She didn’t hear Cat. He usually came running out of the bedroom when she returned from her morning run. He knew it was time to eat, and not much stood between the cat and his food.

The silence grated on her nerves. She couldn’t decide if it was good that she couldn’t hear anything. That meant that whoever had been in her apartment was gone. But it also meant that Cat was gone …or … She didn’t want to think about “or.” She didn’t care about the TV, but if someone hurt her cat, they’d pay for it.

Sarah slipped into the kitchen and grabbed the butcher knife from the wooden block on the counter. She’d rather have her gun, but that was in the drawer in her nightstand in the bedroom. No way was she going in there armed with just her keys. When the ring tone sounded on her cell phone, Sarah almost dropped the knife. Damn. She scrounged the phone out of the pocket in her shorts and answered in a whisper.

“Kingsly?” the voice of her boss responded. “What the hell are you doing?”

She resisted the impulse to ask him what the hell he was doing calling her on the first Sunday she’d had off in weeks. “I’m checking out my apartment.”

“Someone took my television.”