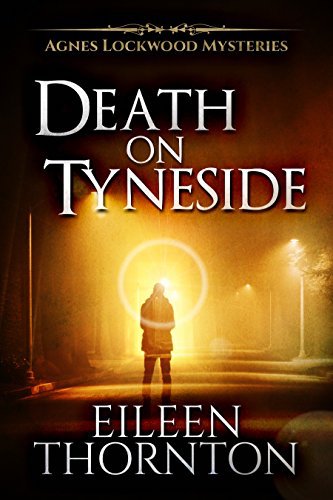 If you like lovely, light mysteries with a clever amateur sleuth who can be too nosy but always kind, you will love this one.

Agnes Lockwood returns to Tyneside, only to stumble across another dead body.

On her first visit, she helped the police solve a murder and gained quite the reputation as an amateur sleuth.

Now, she is simply looking forward to meeting again with Alan Johnson, a D.C.I. with the Newcastle police force.

She is hoping their relationship will continue to blossom, but on her first day back in the city, she gets caught up in another murder.

And this time, her intrusion into the police investigation pushes Alan Johnson’s patience to the very limit.

Agnes trembled with shock as she stared down at the gruesome corpse hidden behind a large bush. The face of the man had been lacerated mercilessly and was covered in dried blood. One glazed eye, hanging from its socket, lay over his cheek and appeared to be staring up at her. The hands, like the face, were also badly slashed. She wanted to turn and run away from the grisly scene, but at that moment, her legs wouldn’t even begin to move. But her mind was working overtime. What on earth was DCI Alan Johnson going to say when he discovered that she becomes accidentally involved in yet another murder?

It was around ten o’clock on a rather chilly morning in March when Agnes Lockwood stepped out of the taxi. She looked across the road towards the River Tyne. Beyond, on the other side of the river, were the Sage building and the Baltic Art Gallery. Her gaze drifted a little further upstream, to where the Tyne Bridge towered above them all. She had been so looking forward to coming back to Tyneside and she certainly wasn’t disappointed.

A movement close by caught her eye. The Millennium Bridge had begun to tilt upwards to allow a vessel to float beneath the massive structure. Some people waited for hours to see this spectacle, yet it was happening in front of her eyes right now. It was almost as though the bridge was raising a salute to her return.

Agnes smiled to herself as she took in the scene. How good it was to be back.

Her thoughts were interrupted when the taxi driver asked whether she would like him to take her suitcases into the hotel.

“You seem to have brought a great deal of luggage,” he added, eyeing the three large suitcases. “It looks like you’re planning a long stay here on Tyneside.”

“Thank you, Ben. That is most kind.” She smiled at the driver. “I’m not sure how long I’ll be here, so I packed for all eventualities.” She looked down at the suitcases. “Though I think I went a little over the top.” She paused. “Would you leave them at the reception desk and tell the staff I’ll be there in a few minutes?”

Agnes had met Ben, a young Asian man, on her last visit to Tyneside. She had hailed a cab one day and asked him to take her on a tour around the city. Since then, whenever she’d required a taxi, she had given him a call.

Glancing back across towards the river, she thought back over the years. She recalled how her mother had spoken fondly of her roots on Tyneside. Yet, to the best of her knowledge, her mother had never returned. Not even for a short visit.

But since visiting the area a few months ago, Agnes now understood her mother’s dilemma. Perhaps she believed that, once back, she would have been reluctant to leave.

Agnes had found it difficult to pack her bags and return to Essex when she was last here, even in the knowledge she would be able to come back a few months later and stay as long as she wanted. The idea had been good; visit the area, before returning home to prepare for her flight to Australia where she was meeting up with her sons. But it hadn’t been that simple. Once here, she had been loath to leave. Even while she was away on the other side of the world, her thoughts had kept drifting back to Tyneside… and to Alan.

Alan was an old school friend, now a Detective Chief Inspector with the Newcastle Police. They had met quite by chance on her last visit and it had been fun to catch up after all these years. They enjoyed each other’s company and they’d had dinner together several times. She had even assisted him in a murder inquiry. Though she knew he hadn’t really wanted her to get involved. She had missed him while she was away and had thought about him often.

“The receptionist is having your luggage sent up to your room. So there’s no need to rush inside the hotel.” Ben’s voice broke into her thoughts.

“Thank you, Ben.” Agnes reached into her handbag and pulled out her wallet. “Now, how much do I owe you?”

He grinned. “This one is on the house.” He gestured towards the taxi. “I didn’t turn on the meter.”

Please click HERE to find Death on Tyneside on Amazon.