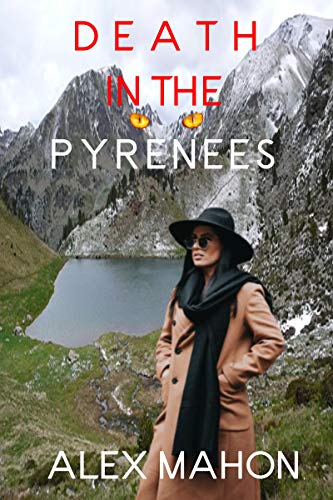 Was the murder caused by the curse of the witch who was burned at the stake many centuries before?

Then a new client pays her to deliver a letter to an old man in a Pyreneen village.

Once there, she comes across a statue that could result in the area becoming a place of pilgrimage.

On the other hand, a businessman plans to turn the village into a haunted theme park for his company FRIGHT NIGHTS.

The old man is murdered.

Suspicion falls on everybody concerned.

But they all have alibis.

Somebody must have done it?

Or is it the curse of the witch who was burned at the stake many centuries before?

Sampler: Death In The Pyrenees

Gil scratched his forehead with one end of the featherless goose quill and squinted again at the words on the vellum.

In principio creavit Deus caelum et terram. In the beginning God created the Heavens and the Earth.

He blew out a sigh. The words were blotched and barely legible on the badly-treated sheepskin. The mix of charcoal and gum he had ground in the mortar was of poor quality. He needed better writing implements if he was going to write the words of God. But where could he find them in such a desolate place?

He rolled up the vellum and tapped it against the face of the angled rock he had been using as a scribe table. He had neither money nor goods with which to barter. And there were no holy buildings nearby. So he could not ask a local monk for stationery. Perhaps he needed guidance.

On the upright log next to him sat a deer hoof filled with burning tallow. He lifted it and set down the vellum in its place. Stooped, he shuffled towards the niche at the back of the cave and shed light on the wooden statue of a crowned woman on a throne. On her lap sat a baby boy with his forefinger and middle finger raised as if blessing a penitent. Golden stars adorned their blue tunics, red robes, and the mother’s yellow dress.

Few men had laid eyes upon them; even fewer knew what secret dwelled within. How long could a defenceless hermit continue protecting the Mother and Child? They needed to be locked away with guardians watching over them night and day.

A commotion outside disturbed his thoughts. He carried the deer hoof to the mouth of the cave and watched the villagers as they scurried along the goat path, burdened by their belongings. It was snowing. If they didn’t find shelter soon, they would freeze to death.

Across the valley, moonlight picked out a troupe of hooded figures moving swiftly down the mountainside. There was no telling who they were as over the years many armies, marauding tribes, and bandits had come this way. Truces were as fragile as eggs and did not stop those determined enough to invade territories.

Gil rushed to the back of the cave and took down the statue. He kissed the Mother and Child’s forehead in turn. “Please find it in your hearts to forgive me. I can’t take you with me this time. The risk is too great.” He placed the statue and the deer hoof on the ground and hurried over to the rectangular table a few feet away. A pot sat on the middle of it, surrounded by bowls, a ladle, a makeshift cross and a bell he used to summon the shepherds to meals. He fetched the ladle and with the spoon end, scooped out earth next to the statue as fast as the heartbeats pounding in his ears.

“They must not find you two,” he muttered. “Or my life has been in vain.”

When the hole was deep enough, he placed the statue inside it, covering it with earth. He tamped the top layer with his feet until it was packed tight, then he blessed himself.

“Rest in peace.” He blew out the candle and stole away.

“Hi, Happy Cat. You sound delicious. What’s on the menu? Give me a run-down of your prices.”

I slammed the phone down on the third abusive caller in a row. It was all Ingrid’s fault. I had asked her to get me a new batch of business cards done at the printers. I wanted a ginger cat curled up on a mantelpiece. A blazing log fire in the hearth. It turned out that she didn’t have enough money to pay for the design, so she improvised. Now the logo depicted a black panther stretched out on a tree branch, partially camouflaged by leaves. I would have much preferred something with colour, say, a jaguar, leopard, or something equally as ferocious like a tiger. But the feline wasn’t the problem. It was the fact that Ingrid had deleted ‘Detective’ and the apostrophe from ‘Cat’s.’ So now I was left with:

Please click HERE to find Death in the Pyrenees on Amazon.