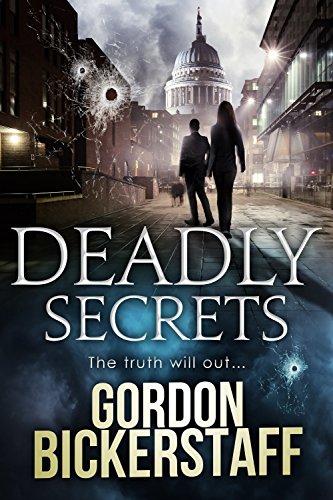 The conspiracy thriller doesn’t have twists. It has hairpin turns.

Gavin’s life will be turned upside down. He joins a company to work on a product that will revolutionise the food industry. His initial gut instinct is to walk away until he discovers one of the company directors is the former love of his teenage life.

The financial implications are global and incredible. Powerful individuals and countries are prepared to kill as they compete to seize control of the company.

Corruption at high levels, a deadly flaw in the product, and the stakes jump higher and higher.

Praise from readers for DEADLY SECRETS

‘… doesn’t have twists – it has hairpin bends!’

‘… plot kept me guessing what will happen next’

Barscadden let out a sigh of relief as he shifted in his seat. Air conditioning and environmental control kept the cabin interior in perfect comfort, but he released his stress by playing with the silky-smooth gold, wonderfully tactile, clunk and clack of his air vent control knobs.

Peter reached for the drink cabinet. ‘What can I get you?’

Barscadden glanced back for a full view of the library. ‘A whisky, please.’

Barscadden took a sip, allowed the whisky to roll down his throat, then watched the light reflecting sparkles on the crystal glass. He sighed, then with disappointment in his voice, he said, ‘I rather hoped Julie would be here to keep that academic dirt out of my hair.’

Professor Julie Blackhest was his director of R&D, and had given her apologies at the last minute.

Peter raised his eyebrows to indicate he would reveal a confidence.

Barscadden acknowledged with his eyes.

‘Julie is attending to an urgent development on a major new project.’

‘You know her. She keeps her cards well-hidden, but she’s planning to discuss new business at the next meeting of Gyge’s Ring. A new process with mega potential is all that I know.’

Barscadden patted Peter on the wrist. His expression conveyed his thanks. ‘But WRATH is covering her back?’

Peter shook his head. ‘Erm … actually, not yet.’

Barscadden shook his head. He disapproved of her operating in the field without backup.

‘Ugh! That woman. Brilliant she is, but Lara Croft; she’s not.’

‘Shall I organise backup for her?’

‘Yes, please. Get eyeballs on her backside.’

‘Done.’ Peter opened his laptop, and typed a communication.

Peter nodded. ‘I did notice.’

Barscadden handed over his empty glass. ‘He’s blowing soapy bubbles. My eyes are beginning to sting.’

Duncan caught Barscadden’s eye in the rear-view mirror. ‘Give me the nod. I’ll stuff him down the toilet like any other lump of shit.’

Barscadden glared back at the mirror. ‘No! Duncan. There’s enough pollution on the beach.’

‘How much of a problem is he?’ Peter asked.

‘Portcairn believes he’s a serious risk to my new business at Doncaster.’

Duncan chimed in. ‘Maybe he’d like to moonlight as a bus inspector.’

Peter raised his voice a notch. ‘He’s an academic. He’ll look out of place under a bus.’

Peter thought for a moment. ‘Maybe, drink driver meets his match when he tries to run down an oak tree.’

Barscadden recalled Steadman’s nicotine-stained fingers. ‘Hmm, he pollutes the air with his carcinogenic smoke. I think he should have lung cancer.’

‘Lung cancer is doable. Would you prefer that in the short or medium term?’ Peter asked.

Barscadden jerked his head back with surprise. ‘Is that an option?’

‘Simply a question of amount and location. Professor Blackhest has done all the calculations.’

Barscadden smiled. ‘So be it. The sooner the better. We all benefit from less pollution.’

Duncan sounded confused. ‘I thought WRATH decided the radioactive stuff was too risky.’

Barscadden turned to Peter for an answer. ‘We stopped using plutonium six months ago. The new stuff is called iodine-131. It has a short half-life.’

Peter explained. ‘Radioactive iodine has a half-life of just one week, which means that after one week, half of it is gone. It will degrade and disappear completely after a couple of months.’

‘Okay, I’ll instruct WRATH to put Professor Steadman on the critical list for go away therapy.’

Henry Steadman didn’t notice anything unusual in his home. Two WRATH agents entered his house covertly during the day. They examined personal effects on bedside cabinets, and discovered his side of the bed. They exposed his side of the mattress, and sprinkled a small volume of water containing radioactive iodine.

Within a week, Steadman experienced persistent nausea. By the end of two weeks, he suffered incapacitating flu symptoms as body fluids leaked into his radiation-damaged lungs. By the end of three weeks, he coughed up blood at night as he lay in bed. His doctors found transformed cells in his blood. As far as they were concerned, another heavy smoker had developed lung cancer. Barscadden’s secret in the library would remain hidden.