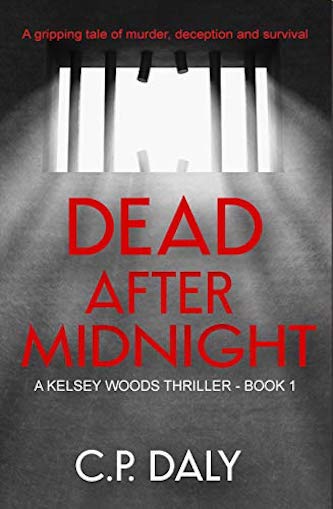 Review: The riveting scenes cascade one after another, and there is no limit to the tension and risks for the main character.

Suzie Q is a prostitute and determined to get out of her current line of work and excited for a fresh start with best friend Lucy by her side.

Her dreams come to an abrupt halt, when, during a night of turning tricks, she stumbles upon Lucy’s brutally murdered body.

Fearing for her life, Suzie runs to her neighbor, Luke’s, to regroup, where she discovers he’s not just a creepy client, but an undercover FBI agent.

He blindsides her when he reveals that she’s mixed up in an FBI investigation and that she’s been unknowingly working for Johnny Stone, New York’s notorious crime boss.

Suzie flees from New York, hiding in a quaint seaside town in Maine.

She changes her identity and her life. Now she has to survive, to keep the life she has come to love.

This is the first novel in the Kelsey Woods thriller series.

Sampler: Dead After Midnight: A Gripping Tale of Murder, Deception, and Survival

Lucy absently wiped the sweat from her face as she watched Suzie put her book aside to concentrate on her nervous habit of picking away at the reddish, gnarly skin that surrounded her fingernails. They sat together in silence on the filthy curb in front of Pinky’s Motel in the stifling August heat, waiting for Kidd to pick them up.

Lucy had heard tongues wagging earlier that Kidd was shooting off his mouth, bragging to anyone who’d listen that he’d be paying Suzie a visit that night for some “alone time,” as he liked to call it, compliments of Johnny Stone. Kidd must be doing something right for Stone to give him access to his most highly paid girl.

Lucy wasn’t pleased with this new development, and she knew that when Suzie found out she’d go ballistic. She hated Kidd—thought he was a dirty pig—and would never agree to it. Lucy wasn’t surprised; she’d seen Kidd eyeing Suzie, sizing up his prey. But she still didn’t know how’d she’d be able to stop it, because Stone rarely made an appearance when they worked the prison. Maybe she’d be able to sneak a call to him before Kidd took her phone. Would he even take her call? Would it do any good even if he did? Probably not.

Kidd announced his arrival with screeching tires as the SUV came to an abrupt halt in front of Pinky’s flashing neon sign. Lucy climbed into the back seat, and as Suzie settled in beside her and began reading, she watched Kidd absently slick back his hair while his beady little eyes bounced all over Suzie like a bad rash. He was almost frothing at the mouth in anticipation.

“Hey, Suzie, how you doing?” he said. “I’ll be around for some alone time with you later tonight. I have to say I’m looking forward to it, sweetheart.” He shot Suzie a creepy wink and a sly smile. When she didn’t respond, he impatiently tapped his fingers on the steering wheel, looking pissed that she was obviously blowing him off. “Hey, I’m talking to you, you stuck-up bitch.”

Suzie sighed and slammed her book shut. “Number one, I’m not your sweetheart.” She looked out the window as the headlights of oncoming traffic raced by. “Number two, you’re not part of the deal; and, number three, never going to happen, so piss off and leave me alone.” She dismissed Kidd by going back to reading her book.

Lucy winced at the sight of Kidd’s tight smile and red face; she knew him well enough to know he wouldn’t let Suzie get away with talking to him this way. If he was smart, he wouldn’t get physical with her. Stone had strict rules about no one messing with his girls, and everyone obeyed the crime boss after the last guy who got rough with one ended up dead. The poor bastard got shanked and stuffed into the dryer while on laundry duty inside the prison. But she worried Kidd would find a way to make Suzie pay for it, somewhere, somehow.

She leaned over to Suzie and whispered. “Stop, you don’t want to take this guy on. He’s a nasty piece of work. Seriously, Suzie, be smart—when it comes to Kidd, keep your mouth shut.”

Lucy was on edge as they drove in awkward silence along the highway heading toward Rockhead Federal Prison. She and Suzie still had a few more prison jobs to go before she’d be done with all of this and could leave this life for good. God, she was scared. The shit would hit the fan when Stone found out she’d been working for the feds and had flown the coop. The feds wouldn’t be too happy either when she took off, but Stone would go nuts. He was known for his nasty temper. Lucy knew firsthand; they shared a history and there was lots of bad blood between them. And, since Suzie had come into her life, he was full of questions, even more angry and suspicious than usual. He’d smacked her around a few times, and it was all she could do to keep him from going after Suzie. She worried he was thinking of sending the girl overseas, where he could get a lot of money for her exotic looks: intense green eyes and a thick mane of long, curly blonde hair.

Please click HERE to find Dead After Midnight on Amazon.