Sampler: For Those Who Dare By John Anthony Miller 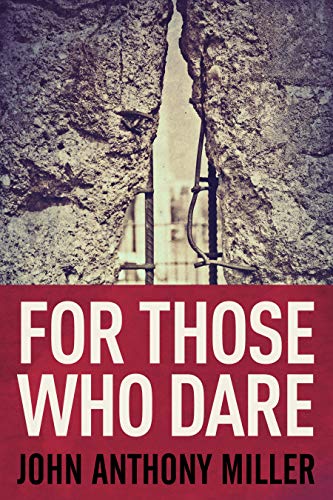 East Berlin, 1961. Kirstin Beck is determined to escape to the West. She watches from her townhouse window as the border with West Berlin is closed, and a barbed wire fence strung through the cemetery behind her house. With a grandmother in West Berlin that needs her, Kirstin knows she has to go.

Tony Marino is an American writer living in West Berlin. As he watches the nearby construction progress, he sees a beautiful woman looking from her townhouse window. Kirstin holds up a sign for Tony to see.

The two hatch a plan for Kirstin to get over the border, but the mission is not easy. With the Stasi closing in on them, Kirstin and Tony enter a kaleidoscope of deceit and danger, determined to attain freedom at any cost.

But in a country torn between communism and capitalism, can Kirstin escape the world she can’t endure?

Sampler: Those Who Dare

Kirstin Beck lay awake, tossing and turning, her blond hair spilling across the pillow. It was a difficult decision, months in the making, a path that once taken, would alter more lives than her own. Some would thrive, reaching uncharted destinations, while others faced destruction, caught in a spinning spiral that could never again be straightened. As the clock ticked, marring the eerie serenity that lives in the hours before dawn, the time to act arrived.

She eased her slender frame from the mattress, ensuring the springs didn’t squeak. She paused, sitting on the edge of the bed, and listened to the rhythmic breathing of her husband lying beside her. When satisfied she hadn’t disturbed him, she stood, remained still for a moment, and then tiptoed from the bedroom into the hall.

She glanced at him again, ensuring he still slept, before going into the bathroom, removing her nightgown, and quickly dressing in black slacks and a grey top. She opened the door to the linen closet and reached to the back of the bottom shelf, behind a stack of towels, to retrieve a small satchel. It contained her personal papers: birth certificate, identity cards, important phone numbers, addresses, and money – West German Marks and American dollars – that she had painstakingly saved and hid from her husband. Careful not to make any noise, she quietly closed the door, cringing as the hinges faintly creaked. She stepped back into the hall, moving carefully in the darkness, and stopped at the bedroom door.

Her husband still slept, facing away from her. He snored faintly, his breathing rhythmic, before muttering something in his sleep. She watched as he moved his arm, his hand feeling the empty space she created when she climbed from bed. He stirred, lifted his head from the pillow, and sat up.

She stepped away from the door, barely breathing, as seconds quietly passed. The bed springs squeaked as his weight shifted and then it was quiet, the silence punctuated by the moving hands of the clock. She waited a moment more and peeked around the jamb.

He lay on his side, facing the doorway, but she couldn’t see if his eyes were open or closed. She glanced at her watch, knowing she shouldn’t wait much longer, and walked quickly past the door, hoping the aged floor boards made no noise.

It was quiet. He didn’t speak, so she assumed he was sleeping. She hesitated, just to be sure, and then crept down the hall to the stairs. As she descended the steps, she stayed near the wall where the treads had more support, carefully descending one step after another. When she was halfway down, she paused and listened but heard no noise from the bedroom. She went down the remaining stairs to the first floor, crossed the foyer and looked into the parlor. She could see the radio in the darkness, the record player beside it. A stack of records sat in a holder, all American – Patsy Cline, the Shirelles, Roy Orbison, the Platters – her most prized possessions. For a brief moment she thought of taking them, but realized they were only belongings, easily replaced, and there was so much more at stake.

Please click HERE to find For Those Who Dare on Amazon.