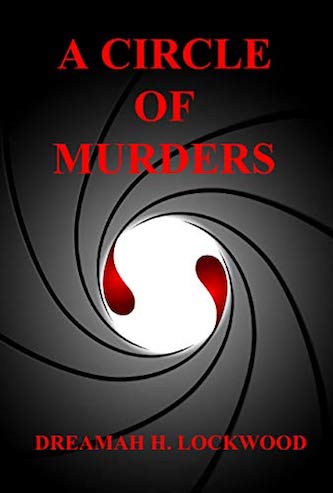 Sarra’s past has caught up with her. It is either flee once more or stop and take a stand to protect the people she loves.

Beaten, raped and a witness to a murder, Sarra Gray is running from a killer. She has something he wants. And, he is determined to find her, no matter how long it takes.

For eleven years she has successfully hidden in a small Kentucky town pursuing an art degree. But without Sarra’s knowledge, her best friend and mentor, Pearl Ann Burke submitted her self-portrait, The Fallen Madonna, to a New York art competition.

When they receive word the painting has won and will be the main attraction at the exhibit, Sarra knows the killer will find her. When suddenly the portrait is returned without explanation, she knows they have to run.

The killer has found out where she has been hiding.

This time she is not alone.

With her daughter, Amanda, and Pearl Ann, they travel south to Half Moon Bay, Florida, hoping once again to get lost and hide among the populous.

Jarrett Blackwell also has been searching for Sarra. He first met her at his family’s annual Christmas party at their mansion on Long Island. It was a night he can’t forget.

That evening, he met the girl of his dreams and lost his mother to murder. Now he wants to know how his dream girl was involved in his mother’s death.

His family fortune gone, Jarrett had to leave New York behind. Traveling south, he searched for Sarra without finding her.

Now a Half Moon Bay Homicide Detective, Jarrett is surprised to discover she is in his town, and practically on his doorstep.

Sarra’s past has caught up with her.

It is either flee once more or stop and take a stand to protect the people she loves.

Together, Jarrett and Sarra must face their common enemy to stop two killers bent on destroying them both.

Sampler: A Circle of Murders

He was dead.  The son of a bitch was at last dead.  How ironic, Sarra Gray thought, how the top of the Christmas tree lay near his outstretched arm, the white tree top angel inches from his fingers.  Maybe he was reaching for salvation, she thought with a touch of bitterness.  Only the devil could want Homer James.

A knock at the door.  Sarra ran to hide in the bedroom and peek through the crack.  Two men entered the apartment and faced Homer.  Their voices grew louder.  Then came the one sound she’d heard from her hiding place, a gunshot.  Through the slight opening, she had watched as Homer drop to the floor, his knees buckling first, the rest of his body twisting to fall onto the beige carpet.  While the killers ransacked the living room, she had rushed to hide behind the false wall where the safe was hidden in the closet.  Staying as quiet as possible was her best hope.  If they found her, she was dead.

Right after closing the opening, she heard them enter the bedroom.  Drawers, jerked from the dresser, hit the floor.  Behind the thin plaster wall, she could hear the sound of fabric being ripped and held her breath, terrified.  If she heard them, they might hear her.  Then, they were in the room.  Voices muttered low, indistinguishable words.  Then, the noise of hangers raking back and forth along the metal rod was far too close.  Sarra prayed and waited in terror.

Everything went silent.  No sound indicated the men had abandoned their search.  Nor did a door slam to show they had left the apartment.  There was the absolute quiet.  Fear made her tremble.  She waited for two hours before daring to emerge and peek into the living room.  The apartment was vacant.

In a panic, she returned to the closet, grabbed a bag from the floor, slipped again behind the wall, and worked the memorized combination.  Into the bag, she dumped the multiple bundles of one-hundred-dollar bills, a stack of DVDs, several ledger books, plus two large brown envelopes, contents unknown.  Even though the bag was heavy, she picked it up and returned to the living room.

Outside, the wind howled and whipped sheets of snow into dancing dervishes across the penthouse balcony.  Lamps toppled from end tables, cast bright yellow, oblong shapes across the floor.  Sofa cushions were ripped open and tossed in a heap before the balcony doors.  Books, with ripped pages and bindings, were everywhere.  Jerked from wall hooks, even the paper backing of the paintings had been slashed, the knife cutting into the canvas.  Every sculpture had been smashed, and the pieces tossed to land on any available surface.

Homer lay as he had fallen.  A dark red stain spread across the front of his white shirt and oozed in a widening circle beneath the body.  Urine stained the crotch of his gray trousers, and his bare feet looked pale next to the beige carpet.

Sarra wasn’t sorry he was dead.  All too well she knew how the bastard took people, twisted them into monsters, leaving them trapped and drained of all hope.  Then they were tossed out like garbage.  “That bullet deserved a better target,” she hissed.  “You got an easy death.”

Time to get out of the apartment.  It was only a matter of minutes before the killers returned.  Now in a hurry, she across the butchered living room, and stopped to stare down at the body, stunned she felt so little grief for the man.  She expected to feel something other than jubilation.  Homer had saved her from her father.  But, she felt nothing.  Not even a twinge of regret.

The odor of blood, sharp and coppery, mixed with the smell of evacuated bowels and bladder emanating from the body, made Sarra gag.  Nauseated and repulsed, she crouched down and forced herself to search Homer’s pockets for the car keys.  She hated to touch him but had to have those keys.  There should be a set for the Mercedes and one for the old Chevy.  Cringing, she reached into Homer’s right trouser pocket.  Luck was with her.  The keyring was in the first one she explored.  As she pulled them out, the jingle sounded loud in the quiet room, and she flinched.  A tight grip on the keys, she hastened to the front door and set the tattered blue flight bag on the floor.

Please click HERE to find A Circle of Murders on Amazon.