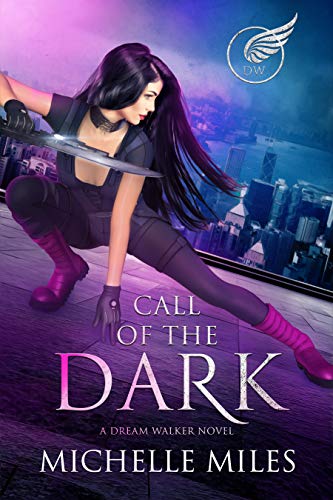 She must stop the coming war between Heaven and Hell, or stand back and watch the forces of good and evil destroy mankind.

Angels. Demons. Holy relics. And a whole lot of trouble in between. Can Anna accept her destiny or will she stand back and watch the forces of good and evil destroy mankind?

Anna Walker has the unique ability to step into people’s dreams. When a catatonic woman is brought to the hospital where she works, her curiosity overrides her common sense and she “walks” inside the girl’s head.

Now she’s on the radar of a fallen angel, Azriel, and her calm, quiet world is turned upside down. Azriel demands she use her walking talent to find the Horn of Gabriel, one of five Holy Relics or lose everything dear to her. Even worse? His Heavenly counterpart, a messenger angel, insists on hiring her for the same job.

Her refusal to help comes at a steep price. When Azriel frames her for murders she didn’t commit, it forces her into the quest for the holy relic. Torn between good and evil, she becomes trapped in her own nightmare when she uncovers a family prophecy claiming she’s the Keeper of the Holy Relics.

Anna must make the most important decision of her life—accept her duty as Keeper, and the only person who can stop the coming war between Heaven and Hell, or stand back and watch the forces of good and evil destroy mankind.

Sampler: Call of the Dark

Dream walking a patient in the hospital during the night shift wasn’t the best idea I ever had. It ranked right up there with taking a stroll alone in the park after dark with a serial killer on the loose. But Emma Cox was catatonic patient number fifty to arrive in the ER that month and I had to do something.

Emma. I’d known her. We’d been in community college together. She was the first friend I made when I returned to the States ten years ago, alone and scared and trying to figure out what to do next. Hell, she’d been my only friend. Until we both met Ryan in physics class. Cute, dimple-faced Ryan. Then all bets were off. She went after him with low cut tank tops, skinny jeans, stilettos and hips a blazing. The fact he asked her out instead of me had nothing to do with us not speaking to each other again. Ever.

Now here she was, laying face up on a gurney, staring into space like some sort of wasted zombie. I was a night owl phlebotomy technician at All Saints Hospital working the graveyard shift. That night, I picked up my assignments like normal and headed off to do my rounds when I caught sight of the woman with colorful hair. Emma liked to experiment with unique hair color. When I saw the crown of platinum violet, my gut told me to check it out.

At first, I didn’t recognize her. She looked like all the others who arrived lately staring out of sightless, pitiful eyes. Their faces were nothing more than vacant skulls with skin sagging off the bones like flaccid leather.

Her youthful, smooth skin that once held a healthy rosy pallor was pale and paper thin. The freckles she hated dotting her nose were more noticeable than ever. Her once bright blue eyes now held a dull sheen. Had I not once been her friend, I wouldn’t guess she was twenty-eight, the same age as me.

Even though I wasn’t supposed to, I read the charts on patients with this malady. It violated all kinds of ethics, but I had to know what was wrong. Plus, I was tech savvy enough to get into the system. Their initial symptoms arose from sleep disorders, then odd behaviors manifested, until finally the patient would go eerily still and merely stare into space. One guy stared straight ahead, unblinking, for four days, but when tested, he caught a tennis ball tossed at him with the reaction time of an all-star MLB outfielder.

The doctors couldn’t explain it.

But maybe I could. If I could get inside Emma’s head, inside her dreams.

I hadn’t done this in a long time or for any other patient, but I knew her. We’d been friends once, even though she got the guy and I didn’t. She helped me through a lonely period of my life before she introduced me to Ben. I owed it to her to find out what was going on behind those sad hollow eyes.

With a cocky confidence, I sat before the girl at death’s door, ready to step into her mind.

I checked Emma’s vitals. The steady beep-beep-beep of her heart monitor was the only sound in the room. Her eyes never focused as she continued to stare into the distance to someplace she saw.

“Hi, I’m Anna.” My voice sounded high and tinny and I cleared it to untangle my nerves. I inhaled a deep breath, let it blow out and started again. “And I’ll be your dream walker tonight.”

I grasped her hands, held them in mine. Her icy fingers cut through my warmth. Determination steered me, though I had no idea if this would work. In the past, when I dream walked, the subject was already asleep. She wasn’t asleep, although technically she wasn’t awake either. I took a deep breath and cleared my mind.

Then it happened. Her pupils expanded from pinpoints to large black pools. I had her. I was sucked into her mind, pulled along like a helium balloon on a string buffeted by the wind. I no longer stared into her face, but into her subconscious, a bystander in her dream. I was with her, watching and waiting.

Please click HERE to find Call of the Dark on Amazon.