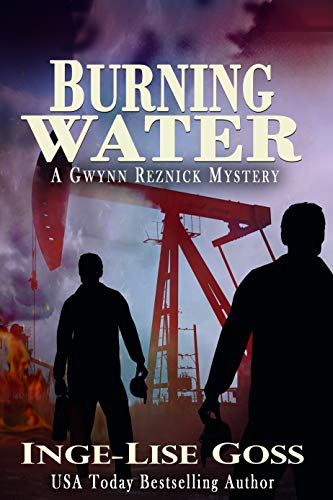 She’s pitted against polished criminal professionals and finds herself in the center of a devious scheme in a tale of murder and mystery.

A Man Goes Up in Flames.

Was it an accident or murder?

…to find the truth.

Placed in an accounting role to watch the key players up close, she uncovers financial irregularities while delving into clues that lead her into dangerous situations. To obtain information, she becomes entangled with a tough crew of oil field workers. Their interpersonal jealousies and mysterious pasts intersect to obscure the truth.

Unraveling connecting threads that link to multiple disappearances, Gwynn discovers she’s pitted against polished criminal professionals and finds herself in the center of a devious scheme.

Will her sleuthing blow her cover before her backup team arrives?</p

Any reader who enjoys action, adventure, murder mysteries, or just a plain good read will love Burning Water, the third book in the Gwynn Reznick series.

Harris still couldn’t figure out why the partner wanted to meet way out here instead of at the office in the city and wondered if Uri had given him the wrong location. He heard banging sounds coming from outside the office trailer and went to the window. Seeing the backs of two men laying out planks, he guessed the kid probably had it right.

Harris grabbed a soda from the fridge and drank it as the noise outside continued. When he no longer could hear any sounds drifting into the trailer, he opened the door. Not seeing anyone, he yelled, “Uri, Jack?”

After waiting for an answer, he closed the door and checked his watch—8:25 p.m. Since the meeting had been scheduled for 7:30 p.m., Harris pulled out his cell phone and called the main office. The kid might’ve given me the wrong location.

Recognizing the voice of the middle-aged receptionist, Harris asked, “Audrey, is there a meeting going on there?”

“Was there a meeting there earlier?” Harris asked, assuming he had missed it.

“Heavens, no. He left here at five sharp, anxious to get home to the new Missus.  I’m just staying a little late trying to catch up on some accounting. Harris, is there a problem?”

“I thought there was a meeting tonight. I must’ve written it down wrong in my calendar.” Harris knew if he claimed that Uri had given him the wrong information, it would end up being his word against Uri’s and he had more important battles to fight.

“Let me check Mr. Ellsworth’s calendar. He does have a meeting set up for Tuesday evening and your name has been penciled in. He probably expects you to attend. I’ll ask him on Monday and let you know.”

Feeling irritated that Uri had screwed up and not given him the right day, Harris pushed his cell into his pocket and headed out the door. He saw orange cones lined along the wood planks to keep people from straying from the repaired walkway.

As Harris strode on the planks, he noticed the souped-up pickup, Uri’s vehicle, and the company truck that had been parked next to it were gone. A loud clanging noise caught his attention. He swung his head in that direction and saw a silhouette, smoking a cigarette, in the shadows by the supply trailer. “Jack, is that you?”

“No,” replied a tall, muscular man, decked out from head to foot in cowboy gear, stepping out of the shadows.

Harris knew his adversary well and assumed he was the reason behind Uri’s call to tell him to come to a meeting that had never been scheduled with the partner. Instead, it was with the man walking toward him, the culprit responsible for the deed Uri had asserted that Harris had committed. “What’s the plan here? Are we going to duke it out? Must admit, I still can’t figure out why you did it. Enlighten me.”

To prove his innocence, Harris had secured information that showed the real guilty party, and had planned to reveal it to the partners when his uncle returned from a business trip. Seeing his enemy’s steely eyes boring into him, Harris figured somehow the guy had learned there was evidence that fingered him.

Keeping an eye on the culprit, Harris picked up his pace along the planks. The muscular man had a reputation for brawling, and Harris knew the bully could easily beat him to a pulp. He slightly tripped when his feet landed in an open space between the wood planks. Then came a loud click and snap as the teeth of an animal trap pierced through one of his leather boots into his skin.  He pressed his lips together to prevent a moan from escaping, but at the same time feeling relieved that his boot took the brunt of the teeth, preventing them from hitting his bone.

Bending down to pry the trap open, he sensed the bully hovering over him. “’Fraid you might have lost the fight, and this is how you plan to make sure that doesn’t happen?”

“Then get me a crowbar,” Harris said, trying unsuccessfully to force the contraption apart. He noticed puddles of oil were in the mud surrounding his boots and the trap. Fear shot through his body as he recalled the cigarette in his enemy’s hand. He attempted to free his foot from the boot.

“You think you can escape that way?” taunted his enemy, holding a crowbar in one hand and a lit cigarette in the other. “You’re not going to need this.” He tossed the crowbar and dropped the cigarette by Harris’s feet.