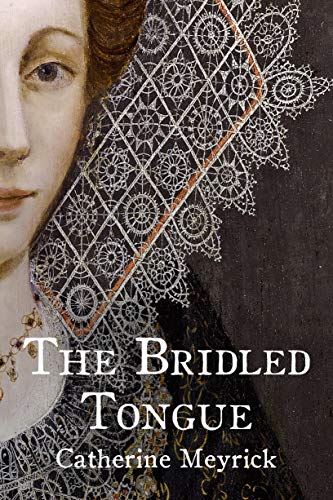 Rife with intrigue and superstition, as well as being a remarkable love story.

Death and life are in the power of the tongue.

Alyce Bradley has few choices when her father decides it is time she marries as many refuse to see her as other than the girl she once was–unruly, outspoken, and close to her grandmother, a woman suspected of witchcraft.

Thomas Granville, an ambitious privateer, inspires fierce loyalty in those close to him and hatred in those he has crossed. Beyond a large dowry, he is seeking a virtuous and dutiful wife. Neither he nor Alyce expects more from marriage than mutual courtesy and respect.

As the King of Spain launches his great armada and England braces for invasion, Alyce must confront closer dangers from both her own and Thomas’s past, threats that could not only destroy her hopes of love and happiness but her life. And

Thomas is powerless to help.

A tall gentleman strode in through the door from the street. Alyce, with the eyes of a mercer’s daughter, took in the brocade of his doublet, the bright silk showing through his slashed sleeves, the ruff edged with fine gold-threaded lace, the paned trunk hose, the leather boots. He was the sort of customer her father courted. With his dark face and crooked nose, it was clear the rapier at his side was no affectation.

Alyce looked towards the apprentices, the journeymen, her father—all were still busy with customers. She stepped towards him. ‘Sir, may I assist you?’

‘Ay, I am here to see Hugh Bradley.’ Although he was not discourteous, it was clear he took Alyce to be a servant.

‘If you will wait a moment, I will let him know. He is with another customer at present.’

But her father had seen his visitor and came over. The men greeted each other warmly.

Her father beckoned Alyce forward. ‘Master Granville, may I introduce my daughter? Alyce was a waiting woman to the late Lady Faulconer at Dalstead.’

‘Mistress Bradley?’ Granville looked to Alyce and bowed. ‘Forgive me, I did not recognize you.’ He smiled. ‘You were little more than a girl when I met you last.’

Alyce curtsied and gave a weak smile in acknowledgment. As the men walked away through the shop to the stairs leading to her father’s office, she frowned, irritated by the unaccountable flush spreading up her face.

Thomas Granville. She remembered who he was—unjustly called a pirate by some, he was a privateer sailing under letters of marque, authorized by the Queen to attack England’s enemies. He had been younger when she had last seen him and far more handsome. But her strongest memory was of his graciousness. On the few occasions he had visited her father those years ago, he had always greeted her, and Grandmother too. And he had paid Grandmother the courtesy that was her due, unlike many in the merchant community. Grandmother may have been beneath their notice but their wives and daughters had come, as had so many others, to the garden gate and, with whisperings and lowered heads, had explained their woes to her. No one left without comfort of some sort, even if it was nothing more than soothing words or a bowl of soup to warm an empty stomach.

Alyce stared around her. Her father was right: even had he been willing to allow her a place in his business, the Mercers’ Guild would have had something to say about it. As she turned to leave, a woman approached her not only wanting help with choosing cloth but advice on how to cut it to achieve the effect she wanted. When Alyce had finished with her, another woman stood waiting, although both Chapman and Wat were free. Alyce wondered if her father would permit her to work in the shop if she did no selling, but only offered advice on trimmings, and cutting and sewing.

Chapman strolled over as her customer left. ‘It seems I have competition.’

‘What do you mean?’ Alyce snapped.

‘The man with your father.’

Alyce stared at him. This was the first time Robert Chapman had spoken to her since her return, yet he acted as if he were continuing a conversation from yesterday. That yesterday, twelve years ago, he had pressed her against the storeroom wall and tried to kiss her, murmuring lewd suggestions of what he knew she wanted from him.

‘Do you not have work to do? If there are no customers, there is always plenty that needs to be done in the storeroom.’

‘Only if you intend to assist me,’ he said, the hint of a smile on his lips.

Alyce had seen her mother do it—straight back, tall neck, staring along her nose as if she had before her some miserable form of creeping life.

‘Do not give yourself airs, Alyce,’ he laughed. ‘You are not your mother.’

Alyce stiffened at the presumption in his use of her Christian name.

‘I hear your father is casting about for a husband for you, but plenty remember your vicious tongue. Few will be as willing as I am to overlook it. I may be the only one to offer.’

Alyce gasped. If he were the last man on earth… No! Marriage to Robert Chapman would be her worst nightmare.

‘There is much to recommend me—I know your father’s business well, and we are related.’

She found her voice. ‘So distant it counts for naught.’

‘It will count,’ he smirked, ‘when he begs me to take you off his hands.’

‘I would drown myself in the Wensum first.’

Please click HERE to find The Bridled Tongue on Amazon.