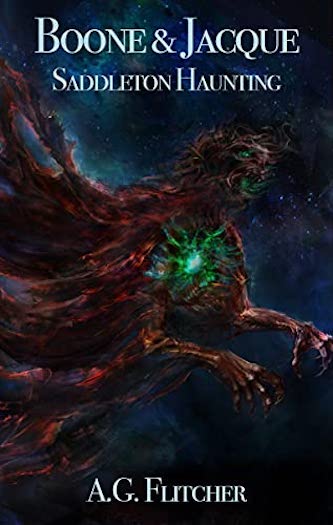 Review: This engaging fantasy novel is replete with dreamlike elements about two orphans with a dark past. It is a thrilling adventure.

A strange being looms over Saddleton.

Boone, Shammy, and Jacque must restore the balance in power and peace in this haunted town.

However, just like in the beginning, there is no telling what will become of them in the end.

Not even those in power and the sheep that follow them.

A. G. Flitcher’s Boone and Jacque series is in the finals for the OZMA Award, given by Chanticleer Reviews.

Each step of a rotting staircase leading into a basement of one of the last remaining dishevelled homes creaked and splintered as Dontin stepped down. “My my, this is an utterly wretched place. I fear I may have turned yellow already,” he said. He took out a dark red handkerchief and covered his mouth. Coughing with a certain arrogance, he took out a small lint roller and ran it over his blue marshmallow peep suit. “You always were a pretentious prat, weren’t you?” scoffed James, rubbing his nearly crisped black and bloody hand. “I could annihilate you with my bloody thumb you gremlin.” James poked Dontin on the back of the thigh. “I told you not to call me that,” said James. “You may want to look in the mirror before correcting someone of higher intellect and height…gremlin.” James launched at him, but Mrs. Greentee dug her long Persian blue nails into the scruff of his coffee stained dress shirt and pulled him back. “Keep your bony little fist in your lint filled pockets.” He nodded in pain as he fought the urge to smack her. For despite his great efforts to keep a straight face, he was in scrutable pain. Her grip did not ease from his collar, and certainly not the back of his neck. Not even when droplets of blood trickled out of her razorblade sharp nails. Nor the sapphire jewels sharp edges from her wedding ring. “Hmph.” She let go and they continued off the stairs.

Dontin crept over slowly to a dark corner of the room, standing for a seemingly long time. She took her chocolate-colored clutch bag off her shoulder and placed it on the ground. “Help me with the chairs, will you?” asked Mrs. Greentee.  James looked around. The little bit of natural light poking out of a broken window behind him and another near Dontin didn’t help him see much of anything. Mrs. Greentee cleared her throat and pointed to her bag. “In there? Really?” asked James. She nodded. He shook his head and laughed a little as he dug through her purse. Puzzled, yet sure of what was in his hand, he pulled out three dollhouse sized Victorian chairs. One was forest green, and the other two were auburn red. Mrs. Greentee took the green one and the far more aged auburn chair.

“Step back two feet, grab the top of the chair with both hands and whip it like a maid would dust a carpet out in the yard,” said Mrs. Greentee.

He smirked at her then whipped the chair. Before he knew it, the chair grew three times his size and smacked him on the forehead. Rocketing him backwards. James looked around in a panic. When he realised what happened, and why Mrs. Greentee was laughing so heartily, he got up. Pretending he wasn’t embarrassed.

Dontin paid little attention to them as they finished setting up the remaining chairs, a coffee table, a lantern poached from the survivors of the wasteland after they were imprisoned, and a silver coffee pot. He ran his polished nails over his collar and it began to glow. He then took out the lint roller once again but this time he squeezed the handle as he rolled it on his collar. The roller absorbed the glow. Reflecting off a jackhammer resting on one of the two outlets of the basement.

He plugged it in and huffed it over to where Mrs. Greentee and James sat waiting for the coffee to brew. Well, Mrs. Greentee sat, James struggled to climb on his chair. She cackled uncontrollably, listening to his grunts and swearing.  Dontin placed the jackhammer down beside the forest green chair and pulled the chain of an old lightbulb just above the chairs. It turned a bright and flickering butter yellow. Before sitting down, he said to Mrs. Greentee: “It is always hilarious to watch such a puny man climb. But we have business to discuss. Do you have a stool? Or maybe a trampoline?” She laughed even harder. He looked at her left foot, pointing to her bag. He rooted around with his lint roller acting as a light. Which helped him find a red plastic stool. “Alright you fa…urgh…ing arseholes. I’m up. And don’t say another dicky word about my height,” said James, turning around and panting.

“Coffee’s ready. James, be a dear and get the pot please,” asked Mrs. Greentee.