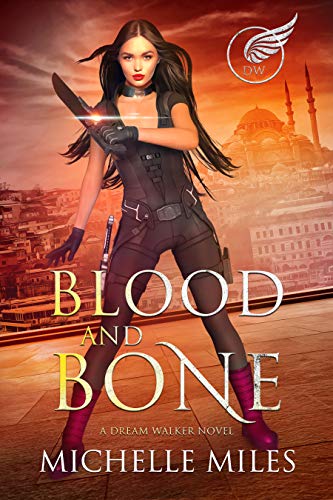 She stumbles upon a sinister plot by the Knights of the Holy Lance whose leader has genetically engineered a race of dream walkers.

Can Anna save Kincade before he loses his soul forever?

Dream walker and relic hunter, Anna Walker, is on the most important quest of her life—find the Holy Relics before Lucifer and his forces of evil destroy mankind.

She’s now after the legendary Spear of Destiny with the power to alter the future of the world.

But when her archenemy, Azriel, captures her friend and ally, Kincade, the world’s destiny must take second place to getting him back. Unfortunately, the price for his soul is the spear.

As her search heats up, she stumbles upon a sinister plot by a group known as the Knights of the Holy Lance. Their leader has genetically engineered a race of dream walkers with the intent to gain the relic for his own demented means.

When he discovers Anna is after the spear, he sends an elite genetically-altered dream walker to take her out.

With the destiny of the world riding on her shoulders, and a terrifying enemy determined to destroy her, Anna must track down the powerful relic before Kincade’s soul is lost forever.

The van doors opened. Demons poured out. Another car screeched to a halt. I glanced back to see more demons pouring out of a second van behind us.

Kincade swore the most creative string of expletives jammed together. If it was under any other circumstances, I might have giggled.

“You’ll have to go through me if you want her,” he said.

For the second time that day, I flushed. White hot heat pulsed over me in a way I never expected to feel around Kincade. If I was the swooning type, I’d have swooned. But since I wasn’t, I unsheathed my dagger.

Azriel’s faced turned dark and terrifying. “So be it.”

He lifted his arms from his sides in a gesture that beckoned the demons to do his bidding. They swarmed toward us. Isobel shouted something incoherent and dove back into the limo. Raul was no idiot. He got back behind the wheel and revved the motor. Kincade gave me a shove toward the car.

“No. I’m staying and fighting.” I had new skills I wanted to try.

He growled annoyance and gave me another shove. This time forceful enough to make me stumble toward the open door. I fell forward and bashed my shin against the edge of the door frame. I fumbled with the dagger until I got it back into the holder.

Clearly annoyed with my failure to comply to his satisfaction, he said through gritted teeth, “Get. In.”

Isobel shouted at the driver to go, go, go. I scrambled into the car as it lurched forward, Kincade right behind me. He shoved me aside, his hands working the zipper on his duffle. He pulled out two guns then used the butt of one to smash a hole in the glass of the back window. I watched in horrified fascination as he shot the demons one after another, the high-pitched whine followed by the flash of his demon guns. He never missed.

Raul floored it as he headed straight for the van parked in the middle of the road. I wasn’t exactly sure what his plan was because it was clear to me, and maybe even Kincade since he cursed again, he couldn’t drive through them.

The car jolted to a halt so hard the back end came up off the ground. I slammed against the back of the seat behind Raul. Isobel and Kincade went flying and landed in a heap on either side of me.

“What was that?” I asked. I tried to turn around to look at the driver.

Even Isobel heeded his warning. She cowered against the seat, keeping her head down. “How are we going to get out this?” she asked.

“I’m working on it.” He handed me one of his guns.

“What am I supposed to do with this?” I said.

“Kill demons.” He broke out the window with the butt of his other gun and flung open the door, using it as a shield as he fired off round after round.

I was more of a knife girl, but the gun would do in a pinch. I slid to the opposite side and pushed open the door, intending to take aim at the demons behind us. As soon as the door opened, a demon charged inside and grabbed me around the throat.

That’s what I got for opening the door without looking first.

The gun jumbled in my hands. I dropped it and fumbled for the dagger at my waist all the while gasping for breath. Seconds later, a high-pitched whine followed by a flash of light and demon guts exploded all over me and Isobel, who was still huddling on the seat next to me. She squealed with disgust but this was nothing new for me.

He was back in the car, reaching across me and Isobel for the door. He slammed it shut and locked it before more demons got in. He grabbed my arm and dragged me over to him. Away from the dead stinky demon that now resided on the floorboard.

“This is couture.” She indicated her once pristine pantsuit now covered in smelly black gunk.

She gave me a thin-lipped glare in response.

The car was surrounded by demons, clawing and trying to get in. An attempt made easier by the broken back window and the broken door window courtesy of Kincade. A few were starting to break through. Kincade and I shot them as they tried, leaving gory dead demons in the openings.

“We can’t hold them off forever.”