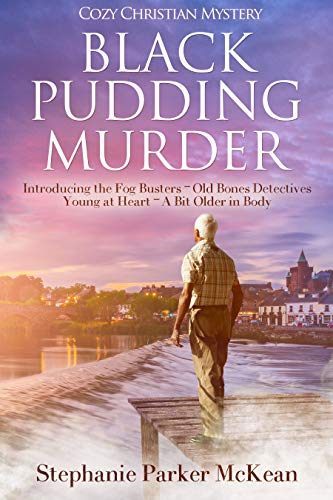 The mystery introduces an eclectic mix of interesting, believable characters and non-stop humor.

Alec—who is nearly blind—informs his friends when they meet at the café for breakfast that he “saw” a murder the night before. They agree to follow Alec to the pier and search for evidence, but the police have already labeled the murder as an accidental death and have no interest in the evidence. The friends form the Fog Busters Detective Agency and vow to track down the killer themselves.

The nascent detectives get momentarily sidetracked by a young man who hires them to help him find his father’s hidden treasure, and by breaking up a dogfighting ring. They are tested at every point in their investigation by the most unlikely enemies.

Black Pudding Murder introduces an eclectic mix of interesting, believable characters and non-stop humor. John and Peg’s mishearing, John’s endless parade of facts, Susan and Rory’s romantic feelings for one another, Alec’s ability to “see” with his ears, and Morag’s tangled thoughts propel the Fog Busters on a rollicking, exciting mystery.

Black Pudding Murder opens up Scotland to readers even as it propels them on a twisty mystery to the finish.

With amazing agility for her age, she sprang to her feet before he could kick her again. He grabbed her long black hair—teased with grey—and twisted it into a knot with one hand while battering her face with the other. “Stop,” she pleaded. “I’ll give you back your money.” But he didn’t want the money now, he wanted to feed the power he felt through his ability to hurt her.

She turned her face away sharply and his fist missed. He stumbled forward. She sidestepped him, grabbed a loose plank from the window, and smashed it over his head so savagely that he crashed to the floor. That gave her the time to whip her knife out of her bundled clothes.

“Get out,” she hissed, flashing the knife at him with her right hand and still clutching the loose plank in her left. He scuttled away from her like a frightened crab. She followed him, knife leveled at his chest. He stumbled to his feet. She tracked him, knife unwavering and board upraised as he felt behind him for the door. He backed out of the door, slipping as his feet hit the ancient moss-covered boards of the Victorian-era dock. He realized he was close to the edge and made the mistake of looking behind him to pilot his escape. She rushed toward him with her weapons. His feet slipped and with a hoarse yell, he plunged off the wet, mossy planks into the black water below…

While Rory and John puzzled over their clue, Alec was getting the ride of his life. He held his white-tipped cane over his head and shouted with glee as Leland sent the golf cart careening down the promenade. “This is th’ wey tae travel, laddie,” Alec shouted to Leland. Leland grinned at him and tried unsuccessfully to get more speed out of the bounding cart. Dog walkers leaped out of the way as the cart lurched toward them.

Remembering why they were traveling in the golf cart, Alec repeated their clue to Leland from memory: For her I’ll dare the billows roar, for her I’ll trace a distant shore. Ah know that one, Leland, laddie. Ah know where to look when we get up ‘yont to the park.”

What wasn’t good was Leland’s drunken driving. They made it to the park, but Leland sent the golf cart plunging down concrete steps. The cart twisted to the side, spilling Alec out on the steps, then righted and skipped down the rest of the steps to grind to a halt at the bottom, caught between the last steps and the stout metal railing at the side. Alec got to his feet and tried to help Leland free the golf cart, but it was stuck decisively. Leland waved him away. “Ye go git mah treasure. Ah will fix this,” He said confidently.