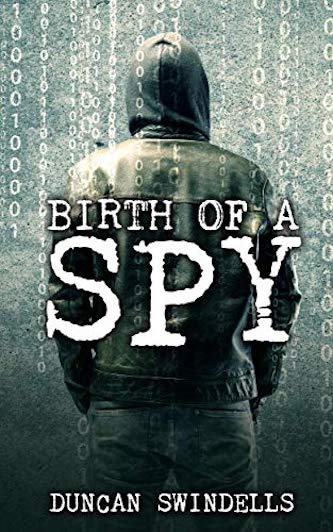 The world created by the story became more deliciously dark with each chapter.

How far would you go to protect the one you love?

His girlfriend is desperate for him to find a job and settle down, so when a fresh code lands unexpectedly on Scott’s doorstep, he promises it will be his last, little realising that revealing the dark secrets it has protected for over fifty years will shatter their lives forever.

Birth of a Spy is the first in the Scott Hunter Series. With Cambridge and London as their backdrop, espionage and intrigue collide with action and adventure in this fast-paced thriller.

Sampler: Birth of a Spy

If childbirth had been the gift of life, then what she wondered would death prove to be? Absolution? The redemption she’d hoped but dared not pray for? At the least, she supposed, a peaceful and never-ending sleep. She’d made sure the house had been empty before fetching the length of coiled grey electrical cable from its cupboard beneath the stairs. In the hallway, she’d caught herself in the tall and damning giltwood mirror which hung by the door examining her profile. She gently pushed at her fragile blonde hair, feeling it bounce back into place under the duress of that morning’s generously applied hairspray. Seeing herself again like that, in the mirror as the questions persisted only threatened to strengthen her resolve. She smiled thinly, her mouth tired and quavering.

Carefully, so there would be no mistake, she set about fastening the cable to the brass door handle which opened into the sitting room, twisting it this way, pulling it that, checking it was secure. The back of her hand travelled across her face, absently wiping away another tear. She would not look in the mirror again. She went to throw the cable over the door, succeeding only at the second attempt. One final inspection of her handiwork followed by a strange moment of pride; the knot would hold. Another hand across her damp cheek before closing, then locking the door firmly behind her, her hand spotted and flecked from the freshly applied mascara. Then she was pulling the cable taught through the ill-fitting doorframe. She had never wanted to live in an old house, that had always been his idea. They were so difficult to keep and cold in the winter too. Taking a chair from their dining set she carefully positioned it next to the door. Now for the other knot. She held the cable in a loose S, wrapping it back and around. Two, three attempts before it met her satisfaction. She slipped out of her shoes, arranging them neatly by the door and in stockinged feet stepped up onto the chair, facing the room. Her room, her home, her family. She checked her blouse, her pearls and smoothed down her skirt, re-arranging an errant pleat, then, trying not to disturb her hair, slipped the noose over her head and gently began to rock the chair. Her family she thought, it had always been her family, well now it was time to put an end to all of that. She felt the cold plastic cable by her ear as the chair tipped and slid away from her. An end to the memories. An end to the pain and the guilt.

As her feet skidded on the highly polished leather she felt the bight of the noose. Soon everything would be better. Soon it would be over and he would be gone. Her foot slid off the edge of the chair as it rocked and tumbled out of control, the woman’s arms shooting out from her sides in an involuntary and unwanted closing gesture of self-preservation.

She lost consciousness almost immediately, her hands instinctively clawing as the cable tightened around her neck. And then, in one final act of wanton self-destruction, unable or unwilling to maintain her balance, a flailing foot kicked the chair from beneath her.

The cable whipped and flexed, straining hard against the sitting-room door, and then, under extreme pressure, the brass fittings buckled and twisted. First one and then with a harsh wrench, all of the soft metal screws deformed and tore from their mountings sending showers of splintered pine into the hallway. The handle flew upwards towards its frame as the woman’s writhing body dropped. The chair, kicked violently, sent crashing against an old and unloved oak cabinet. The sound of shattering glass, the acrid smell of urine as, her neck neatly broken, her body failed her. She lost her grip on the cable and then just as the last of her strength was about to abandon her, one final convulsive spasm.

She came to rest on the carpeted floor, her body crumpled next to the upturned chair. And that was how they would find her.

Please click HERE to find Birth of a Spy on Amazon.