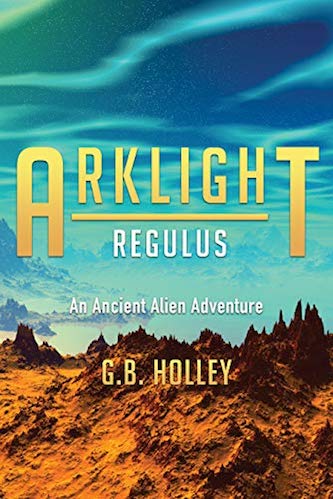 The risks are high and there’s no guarantee their confrontation will end the slaughter. But they have no choice. They must try before it’s too late.

An unborn child of incredible power.

Her parent’s mysterious past and an ancient alien species hold the key to human survival.

ARKLIGHT Regulus is the exciting and dramatic conclusion of the ARKLIGHT Ancient Alien Adventure Trilogy.
The global war rages as Dr. Tegan Strong-Locke and her allies struggle to stop the alien Etu Inu Idimmu from decimating the human race.

Human resistance is strong, but willpower and the efforts of a united world military aren’t enough to stop the Idimmu and their genetically engineered killing machines, the Xunta.

As the Idimmu and the Xunta continue their relentless worldwide attacks, Tegan and an alien ally, the Igigi, work feverishly to produce and launch Deep Sky, a bioweapon that offers humanity the best hope against the onslaught.

But Deep Sky alone may not be enough to provide salvation. New Xunta have been released and they are faster, more cunning, and they can swim.

The underwater cities and outposts are now at risk. As Tegan and her unborn child, Kyla, grow stronger in Arklight energy, they learn that the power they control may offer another path to peace. It will require them to face the Monan, the supreme ruler of the Idimmu.

The risks are high and there’s no guarantee their confrontation will end the slaughter.

But they have no choice.

They must try before it’s too late.

The Shenandoah Bunker was supposed to be a top-secret facility. It was located within the Massanutten mountain range near Fort Valley, Virginia, ninety-three miles west of Washington. The massive fallout protection and relocation facility had been built during the Cold War and had remained undiscovered in a serene forested area for over fifty years.

During the exodus of the highest-ranking military and government family members from Washington and the surrounding area, someone living along a two-lane road that led to the bunker had taken notice. It would have been hard not to notice the caravan of buses headed up the mountain from the “valley within a valley,” as it was known by the locals. A thousand people had been transported along the route during the early morning hours over the past several weeks. When the bunker was filled to capacity, its blast-proof door was sealed.

Its location had been selected for the same reason General George Washington had chosen it to be the place for a last stand against the British if his Continental Army had lost the battle at Yorktown, Virginia. It was a natural fortification and easily defensible. The bunker was nestled between two ridges at the road’s end. Anyone coming up the winding road would be spotted long before they arrived.

The main entrance to the bunker’s blast door was hidden deep in the mountain. A long, arched tunnel, large enough for a tank to drive through, led up to the massive door. The entrance to the tunnel was surrounded by a high chain-link fence and retractable metal barricades that could stop a semi-trailer truck. Remote sensors scattered in the woods outside the barricade would also alert security personnel to any incursion into the area.

It had been two days since the location of the bunker had been disclosed. The information had spread quickly despite the news media’s being largely controlled by the government. Afraid to shelter in their homes, civilians coming up the mountain road to escape the alien invasion had swelled from a trickle to over two thousand in the last few hours. The road looked like a parking lot, and from a manned, camouflaged observation post, countless headlights were visible as the cars continued to park along the roadway.

Marine Gunnery Sergeant Mathias West and the rest of his Marine Corps Security Force rifle platoon had been assigned to the Shenandoah Bunker when the first of the families had arrived. Pulled from their training duties in Norfolk, Virginia, the three rifle squads attached to the platoon had been deployed to insure the security of the bunker. West stood by a chain-link gate wishing his platoon leader hadn’t been reassigned, which left him in command. This was supposed to have been an easy posting. Now he was standing between two fire teams armed with M27 rifles and an angry mob. Powerful floodlights lit the area in front of him.

He’d repeatedly ordered the crowd to disperse and warned them that deadly force would be used if they attempted to breach the outer fence. It was starting to look and sound more like an uprising. He watched as several people worked their way up the steep, rocky embankment along the fence line.

“Let us in, for God’s sake!” screamed a bearded man at the front of the crowd. A woman holding a child stood next to him. The crowd had started to crush her against the fence. The child wailed.

“I said stay back!” West shouted as the same man shook the chain-link fence, which was topped with razor wire. The last thing he wanted to do was order his team to kill unarmed, panicked American civilians, but he had standing orders saying that no one was to gain entry.

West looked up and verified that the hidden secondary entrance on the ridgeline hadn’t been discovered. In the darkness, he couldn’t see the third fire team he’d positioned there. If anyone got past the third fire team, which was unlikely, the automated defense system would kill anyone who got too close to the small, camouflaged tunnel that led to the second entrance of the hidden bunker.

“You will disperse immediately!” West shouted.

“We’re all human beings with families,” a woman shouted. “If we stay out here, we’ll die. You must have family. Would you treat them like this?”

Another man yelled, “His family is probably safe inside. He doesn’t give a shit about us.”

A chant started as the crowd surged in waves against the fence and gate. “Let us in! Let us in!”

Gunfire erupted down the road. The crowd surged forward, and the fence began to lean. Several people climbed on top of a sagging section of the fence and jumped onto it to bring it all the way down.

“Corporal Norton, advise the Lion’s Den that we have a breach,” West ordered as he backed up to a secondary barricade.

The Lion’s Den was the secure command center deep within the bunker. He hoped he’d be advised to stand down or to at least be allowed to pull his teams back and take shelter in the bunker.

“Lion’s Den said that the orders stand,” Norton said. “We have to hold our position at any cost.”

“Shit!” West exclaimed. “These people don’t have the means to get through the doors.”

“Protocols that were established for an enemy force,” West said.

When the mob finally trampled the fence flat to the ground, five young men hurdled the razor wire and charged them. West thought they were about his age, and he could see the determination and anger in their eyes. Many more people surged through the gap. Then he saw the handguns the men carried. Now they’d become an enemy force. He took a deep breath, then ordered his men to fire.