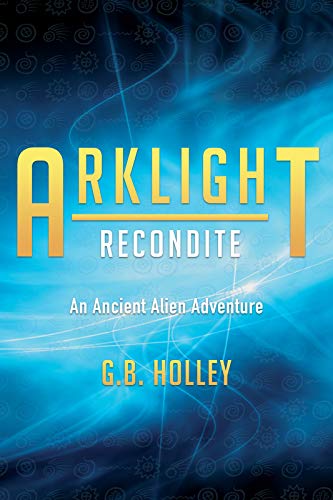 Surrounded by peril, Tegan and her intrepid team must remain hidden as they search for a way to prevent global genocide.

An ancient enemy returns and they want Earth as their own.

In the second book of the ARKLIGHT series, Dr. Tegan Strong-Locke unravels the mystery of an ancient alien marker she’s found in the Bahamas.

In doing so, she learns a sacred truth about the origin of the universe and an astonishing celestial power.

Disclosing what she knows could have catastrophic consequences, but it also could defend humanity against an invading alien species and their genetically altered human puppets.

Surrounded by peril, Tegan and her intrepid team must remain hidden as they search for a way to prevent global genocide.

The Whispering Winds and the Deep Current were sailing to the site of the alien marker. Tegan had chosen to keep to herself after her encounter with the alien drone. She sat with her legs dangling off the leading edge of the trampoline, the saltwater spray splashed up as the twin hulls of the catamaran plowed through the shallow swells of the Atlantic. Images of a wizard standing on a beach talking to her in high-pitched clicking sounds echoed through her thoughts. They were the same sounds she had heard for a brief time after the alien craft had scanned her last night. She couldn’t shake the flashes of the strange places she kept seeing. Were the images and sounds memories, or were they something else? Regardless, they seemed familiar to her.

After the Whispering Winds was secured to the mooring buoy over the site of the marker, she walked back to the cockpit and prepared her dive gear. Tegan dropped her BCD into the water and stepped off the dive platform. The warm Bahamian water caressed her as she watched the others enter the water behind her. She put her mask on, cleared it, took a drag of air through the regulator, and dove.

The marker looked the same as when they’d discovered it. It was embedded in the coral and shimmered in the light from above. This was the first time Garth and Knolls had seen it and she was interested to see their reaction. They ran their hands over the uneven coloring of the metal and appeared mesmerized as they traced the lines of the intricate symbols.

Tegan removed her mask, handed it to Cal, and gently nudged Garth and Knolls aside. She placed her forehead on the center symbol and the light bloomed and penetrated her eyes. She opened her mind instinctually to the source. A tidal wave of new images overwhelmed her. The clicking sounds grew in intensity, but she knew that she was the only one that could hear them. She was close to a breakthrough. She could feel it. Then suddenly, the intensity of the energy flow subsided, the blue light pulsed, and the clicking sounds stopped.

What are you? She felt a response. A chill ran through her, the marker had understood her inquiry. She sensed it was welcoming her home.

Cal touched her arm. She wanted to continue but Cal’s tugs were becoming more insistent. He was interfering and she wished he would stop.

Suddenly, he did. The energy field she had experienced days earlier returned. Cal had been pushed away from her. The marker had understood her and taken action. She could hardly believe it. She exhaled a bubble stream and slowed her breathing. She wanted to know. She had to know. Symbols invaded her mind. She didn’t understand any of them, but the blue-white light blazing into her eyes slowly faded, then the energy field disappeared. Tegan floated free feeling a sense of disappointment.

A vibration rippled through the water. Something was happening. The intensity of the vibration increased and turned to a low rumble. Then the coral and rock shook violently creating a large silt cloud, followed by a strange sound. Suddenly, pieces of coral, sponges, and sea fans were adrift in the current. The silt cloud blossomed. Hundreds of fish bolted into clearer water. Then all went quiet.

The sound of her air bubbles and the crackling of the coral was gone. It was as if she had stepped into the vacuum of space. A moment later, her hearing returned, and the large silt cloud dispersed. Tegan could hardly believe what she was seeing.