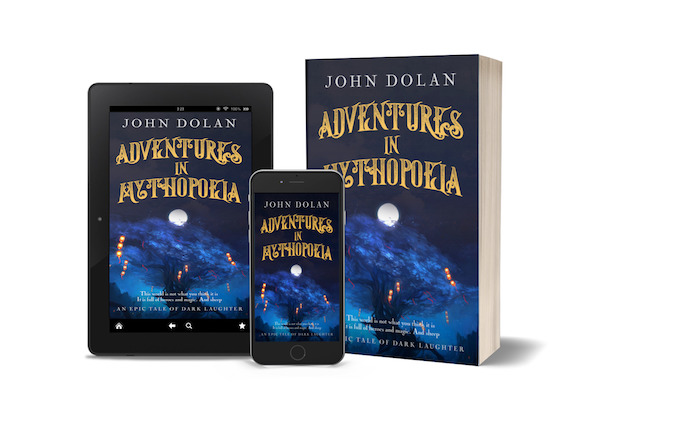 A modern-day epic drawing on the Greek Myths, Don Quixote, the Quest for the Holy Grail, and Carl Jung’s treatise on UFOs.

“It was neither the best of times, nor the worst of times. It was somewhere in the middle.”

Pádraig O’Breasail – publican, drunk and ex-Arsenal footballer – is up to his neck in debt to the Chinese gangster Mingzhu Tang.

With time running out, the desperate Irishman goes for a tarot card reading at Driscoll’s Circus hoping to find a way out of his predicament.

Meanwhile, the world is descending into anarchy and his nephew Jason is considering quitting his job as a male escort.
Plus, there’s the little matter of the sheep …

So begins a modern-day epic drawing on the Greek Myths, Don Quixote, the Quest for the Holy Grail, and Carl Jung’s treatise on UFOs. Packed with dark humour and eccentric characters,

‘Adventures in Mythopoeia’ will take you on a madcap journey of criminality, enchantment, laugh-out-loud gags, and British weather.

The March night had pulled a cover over the sky, and the fairground was in full swing on the Common. The earlier downpour had done little to dampen the enthusiasm of the mainly young London crowd, who remained eager to be fleeced out of their hard-earned cash on the rigged games and dodgy rides.

In years gone by, Driscoll’s had been a touring circus, but those sourpuss animal rights people had put paid to that business model, so there was no longer a sawdust circle under a Big Top. Consequently, the freak side-shows, dodgems, roundabouts, food and drink vans, and chance-your-luck stalls had become the main – indeed the only – attractions.

Pádraig Killian O’Breasail took a quick gulp from his silver hip-flask, wiped his muddy hobnail boots on the coconut mat outside the fortune teller’s tent, and ducked inside.

O’Breasail was a big man, with unkempt ginger hair both on his head and curling out of his nostrils. His green check suit had seen better days, and so had he. That evening he was a little unsteady on his feet on account of the fact that he’d had a trip to the races, and consequently had been drinking for several hours. He’d lost over a hundred quid on the horses which he could ill afford, but the man had a feeling in his water that the woman in the tent had some good news to relate.

The fortune-teller squinted in the dim light at the tweed-clad apparition. Her overly-theatrical robe was stitched with arcane symbols, and rendered her seated form shapeless. Her beady eyes were lined with kohl, and glittered in the glow of the candles. When she spoke, it sounded as if she had been gargling with gravel.

“Hello, Pádraig. I was wondering when you’d turn up.”

“I’d never let the chance go by to see you when you’re in town, Selene, me love. You know that,” he replied in his thick Irish brogue.

“I hope you wiped your feet.”

“For sure, I wouldn’t soil your premises with cursèd London clay.”

He sat down at the small folding table which was covered with a star-spangled cloth, and offered her his flask. She took it, wiped it carefully on her shawl, and necked back a draught.

Selene Fortuna was in her fifties, as was O’Breasail. They had been seeing each other on-and-off for thirty years, whenever the Driscoll’s Circus itinerary permitted. Both were lined in the face, coarse in features and in speech, and simple in their beliefs. Life is hard and only silver makes it easier, might have been their shared motto, had they been inclined to philosophise. Which they were not.

The pair of them hailed from Dublin, though they had not met until adulthood, and it was the cards that had finally drawn O’Breasail to her. Of this, there was a certain inevitability. His mother had been a reader – that is to say, had the gift – and was rumoured to be from gypsy stock. At the important moments in his life, his habit had been to consult with Wise Women, and Selene was his preferred oracle. She had always given him good advice, and that was what he needed now.

Please click HERE to find Adventures in Mythopoeia on Amazon.