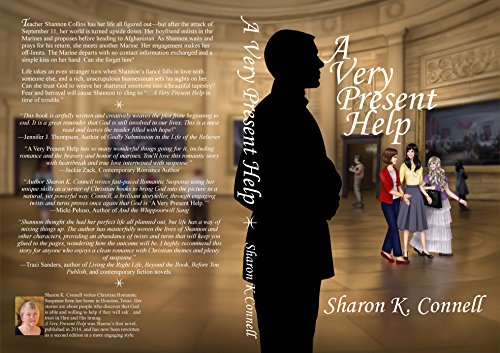 Life takes a strange turn for Shannon when a rich, unscrupulous businessman sets his sights on her, and her fiancé falls in love with someone else.

Teacher Shannon Collins has her life all figured out—but after the attack of September 11, her world turns upside down.

Her boyfriend enlists in the Marines and proposes before heading to Afghanistan.

As Shannon waits and prays for his safe return, she meets another Marine. Her engagement makes her off-limits.

The Marine departs with a simple kiss on her hand and no contact information exchanged. But can she forget him?

Life takes a strange turn for Shannon when a rich, unscrupulous businessman sets his sights on her, and her fiancé falls in love with someone else.

Can Shannon trust God to weave her shattered emotions into a beautiful tapestry?

Fear and betrayal will cause Shannon to cling to “…A Very Present Help in time of trouble.”

Shannon Collins sat at her desk, twirling a silky black lock of shoulder-length hair around her thumb as she made final notes on her lesson plan. Colorful fall drawings from her second-grade students filled the wall behind her.

Rapid footsteps echoed in the corridor just outside the classroom. Her head shot up and she stared at the door. Who could that be running through the halls? The students had all filed into their rooms and taken their seats more than an hour earlier. Maybe someone who came in late?

She hurried into the hallway to catch the perpetrator in action. To her surprise, it was an adult, halfway to the far end of the hall. Probably a parent.

She couldn’t very well reprimand a grown woman, but she could ask her to slow down so as not to disturb the classes in progress. Shannon opened her mouth to call out. Too late. The woman had rounded the corner into the next hall.

The principal’s voice came over the PA system. “Teachers, there’s been an emergency—an—ah, incident. Please gather your students and report to the auditorium at once.”

Mr. Hawkins’s voice had wavered. She’d never heard him sound like that before. What could involve the whole school? Would the students and staff all fit into the auditorium at the same time? Shannon’s mind whirled as she recalled news reports of Columbine. That couldn’t happen here. Could it?

Shannon stepped back into her classroom. “Children, please form two straight lines at the front of the room. We’re taking a walk to the auditorium.”

Chairs screeched as children left their desks and made their way forward. Shannon rubbed the prickled hair on the back of her neck as she led the children into the hallway and through the corridor.

At the end of the hall, one little girl came to a halt and gazed up at her. “What’s wrong, Miss Collins? You look scared.” The other children stopped and stared at her.

“I’m sure everything’s fine.” She put on her best assuring smile.

By the time they reached the auditorium, the atmosphere dripped with tension. What had happened?

The University of Chicago Law School

Rick Albright stepped out of his first class for the day. If that course gave any indication, the rest of this year would be a doozy. His last semester of high school and senior year in college was a snap, but it wouldn’t be that way with the final year of law school. Rick chuckled and thought, No cakewalk this time. But he was anxious to become an attorney. Someday he’d get involved in politics and make his mark.

He made a beeline toward the lounge. A donut would sure taste good about now, if the vending machines hadn’t run out. As Rick opened the door, a dozen people sat in front of the TV, eyes fixed on the screen, faces pale and painted with fear. “Hey, what’s going on, guys?”

A young woman snapped her head around at the question, her hair flaring out as she did. “Where’ve you been? Don’t you know what’s happening?”

With his dark, wavy, rust-colored shock of hair and rugged features, Rick often turned ladies’ heads. But this girl’s voice conveyed a sense of urgency, not flirtation. The eyes of the other students sitting with her never moved from the screen. One had a hand to his mouth as though in shock. A second female had tears streaming down her face. Rick’s eyes followed their line of vision.

A reporter’s voice wavered as a huge gray cloud pursued him through the street, threatening to engulf everyone in its path.

The screen switched to a second reporter. Behind him, billows of smoke rose from what appeared to be New York’s Twin Towers.

Were they watching some horrible Hollywood film? An anchorman’s chilling words filled the airwaves, discounting that theory.

Rick’s jaw slackened and his eyes widened. This was no work of fiction. It was happening in real time!