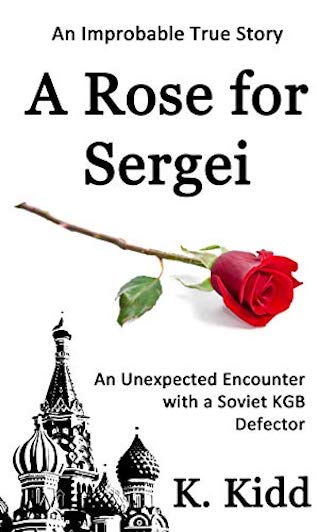 It was hard to believe that Sergei was my date for the evening.  When I was a child I was afraid of Russians.

He was a Soviet defector.

She worked for the U.S. Federal Government.

What were they getting themselves into?

Sergei Kourdakov jumped from a Russian trawler in 1971 and barely survived the treacherous swim to the rocky shores of Queen Charlotte Islands, Canada.

The handsome, twenty-year-old ex-KGB naval intelligence officer had defected—leaving behind a horrific life he could no longer face.

K. Kidd’s search for independence and a career with the Federal Government led her on a journey that far surpassed any expectations.

A year after Sergei defected; they met at her office in Washington, DC.

The immediate attraction surprised them both.

“Even you could be spy,” Sergei whispered.

This captivating true story chronicles K. Kidd’s real-life relationship with a man who gave up everything for freedom.

In her eye-opening memoir, the author reveals a side of Sergei Kourdakov that few people ever saw.

Sampler: A Rose for Sergei: An Unexpected Encounter with a Soviet KGB Defector

“Excuse me; I would like to go to the men’s…how do you say in America…restroom?” Sergei asked in his broken English.  “Is that the right way to say that?”

“Yes, that is the right way; you could also say men’s room.  And it’s okay to excuse yourself,” I said.  “It isn’t rude.  I’ll be fine sitting alone a few minutes at the table until you return,” I assured him as I smiled and tried to refrain from laughing.  He was so incredibly polite.  The way he spoke, his broken English combined with his Russian accent, could be very amusing at times.

We were having dinner at the JW Steakhouse at the Key Bridge Marriott in Arlington, Virginia.  My date was Sergei Kourdakov.  He was twenty-one years old, and he had defected from the Soviet Union over a year ago.  He had been a member of the KGB, the Commissariat for State Security or secret police, and a Soviet naval intelligence officer—intimidating credentials for sure.  He was also very good looking, which I found even more intimidating.

I worked as a secretary at the Office of Information for the Armed Forces, a division that came under the Office of the Secretary of Defense.  I was also twenty-one years old.  We had recently met at my office in Rosslyn, Virginia.  Sergei had flown in from Los Angeles and was meeting with Government Officials in Washington DC.  Sergei’s incredible story was making headlines in the United States.

As Sergei got up from the table and sauntered off in search of the men’s room, I could see that all eyes in the restaurant were on him.  Both men and women stared at him, even the wait staff.  I was not surprised at their seemingly awestruck reaction.  He was very tall with huge broad shoulders and muscular arms that strained at the seams of his shirt, the result of years of body-building.  His stride was confident, purposeful, and he definitely commanded attention.  He stood out in any crowd.

While I waited for his return, I leaned back in my chair and enjoyed the view out the windows.  The restaurant was on the top floor of the hotel, and you could see all the grandeur of Washington DC, Georgetown, and Georgetown University right across the Potomac River.  The view was breathtaking at night with the city lights twinkling ever-so-slightly in the reflection on the water.  It was captivating; I never tired of that view.  In the early evening the city lights illuminated the streets and radiated a soft, peaceful glow over the city.  The lights also helped hide the scary, dark parts of the city, and I liked that.

I wrapped my fingers around the stem of my wine glass just a little too tightly.  It must be a case of “second date nerves,” I thought.  Just take a deep breath and try to relax, I told myself.  I had been on many dates; however, nothing even came close to this.  Sergei was so different from anyone I had ever met, let alone dated.  He was a Russian defector whose past history with the KGB was nothing to take lightly.  It was serious business, and the element of danger was not lost on me.

My thoughts flashed back to security briefings from when I worked at the Defense Intelligence Agency (DIA).  We were taught to be on the lookout for anyone trying to coerce secret information from us.  These people could be friends or neighbors, someone that you would not ordinarily suspect.  They had a word for people like that…spy.  The thought that Sergei could be a spy did cross my mind, but I knew I had never told him I used to work for DIA.  I brushed those thoughts away for now since I knew I tended to be overly suspicious sometimes.  But then, I always did love mystery and intrigue.

It was hard to believe that Sergei was my date for the evening.  When I was a child I was afraid of Russians.  I never forgot the air raid drills we had in elementary school.  My father was a pilot in the U.S. Air Force and my family lived on military bases.  When the air raid siren blasted we practiced hiding under our desks at school, using them for protection from shattered windows, as we prepared for an attack that might one day come from the Soviet Union.  And yet, here I was now, having dinner with…the “enemy.”

Please click HERE to find A Rose for Sergei on Amazon.