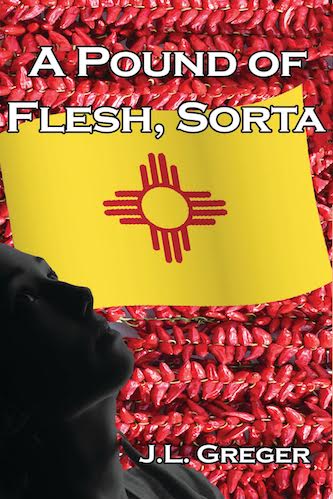 She wasn’t going to touch it. It might be laced with a poison. This wasn’t a gift from a friend. Someone was angry with her.

Leaders of drug gangs in New Mexico don’t want scientist Sara Almquist to testify at their upcoming trials for murder and racketeering.

After Sara gets a package of sheep guts contaminated with the bacteria that causes the plague, FBI agents rush to protect her.

But is the package a threat from the gangs to stop her from testifying or a public health alert by a whistleblower?

This mystery/ thriller is an example of science in fiction.

Sampler: A Pound of Flesh, Sorta

Sara Almquist looked at the white parcel in front of her door. A brown UPS delivery van careened around the corner away from her home. This was typical when the doorbell rang at this time of day. She never reached the door before the delivery guy was climbing into his truck. Today she was either a little slower than usual or he was a little faster.

The box was clearly marked with her name and address. She didn’t remember ordering anything recently, but she sometimes forgot orders. Maybe Eric Sanders had sent her a surprise package. Red “PERISHABLE” stamps were on the top and sides of the package. She guessed it must be food. Bug, her black and white Japanese Chin, was smelling the carton intently and waving his plumed tail. He seldom gave boxes left at the door a second sniff. It must be special.

She carried the package, about the size of six shoe boxes, to the counter in her kitchen. It was odd that the label listed the shipper as “New Mexico Industries,” but didn’t show a return address. She didn’t know a company with that name. She pulled a utility knife from her tool drawer and slit the silver duct tape connecting the two flaps of the box. A Styrofoam carton was tightly wedged inside. Sanders had sent her something fragile or that needed to be kept cold—maybe it was tropical flowers or gourmet cheeses?

She cut the tape around the lid, lifted the lid, took out two blue gel freeze packs, and screamed. The shock passed quickly, and her innate curiosity and scientific training took over.

A firm-looking ivory mass with streaks of pink and ridges lay in the box. It was probably the tissue of a large animal. It was not squishy like brains or squiggly tubes like intestines. It looked sorta like the tripe sold in rural meat markets, but this blob had big linear ridges, not a honeycomb of ridges. It was most likely the stomach of an animal. Several red, almost black, spots dotted the creases between the ridges.

She wasn’t going to touch it. It might be laced with a poison. This wasn’t a gift from a friend. Someone was angry with her.

Four months ago, Sara had helped local police and the FBI identify the butcher at a carnicería in nearby Mercado as the killer of homeless veterans who interfered with his drug business in Albuquerque. It had been a complicated case and her friend Eric Sanders, then assigned by the State Department to the embassy in Cuba, had tracked an assassin hired by the drug syndicate from Havana to Miami to Albuquerque. Now the butcher, his wife, drug kingpins from Miami, and a number of former members of the Albuquerque Police Department awaited trial for murder and drug trafficking. They would be tried in federal court under the Racketeer Influenced and Corrupt Organizations Act, better known as the “RICO” Act. Sara would be a key witness for the prosecution.

The mass didn’t look like it would explode or emit dangerous gasses, but it was covered with plastic film. As a scientist, she’d seen many disgusting samples over the years. As Sara put the ice packs and the lid back on the carton, she thought she heard a ticking noise. Her imagination was probably working overtime, but she saw no reason to tempt fate. She carried the carton out of her house and placed it in her driveway. If it exploded, the house wouldn’t suffer too much damage. She didn’t think the package was big enough to contain a lot of explosives, but it wouldn’t take much with the right ones.

Rather than call 9-1-1, Sara punched the button for Mercado Police Chief Gil Andrews. She had his cell phone number on speed dial because they had worked together on several cases during the last couple of years. “Gil? I have an emergency. Just received a package of… tripe or something like it. Anyway, it’s ticking.”

“The carton is in my driveway so it won’t blow up my house.”

After a few quick questions, he said, “Call Ulysses. He’ll want his lab crew to see your new mess, but my bomb squad and I are on our way.”

Sara suspected he was right. Her car had been blown up in the FBI parking lot during the investigation of the Albuquerque drug trade four months ago. Neither Gil nor Ulysses Howe, the special agent in charge of the Albuquerque office of the FBI, thought she panicked easily. Ulysses would consider the package a serious threat.

Please click HERE to find A Pound of Flesh, Sorta on Amazon.