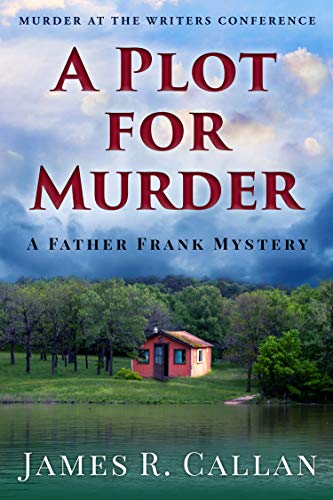 The writer has been accused to stealing someone’s story. Now he’s dead. Can Father Frank stay out of jail and alive, long enough to find the real killer?

Rod Granet, an award-winning novelist and womanizer, is the main speaker at a writers conference. But after the opening session and in front of a crowd, Maggie DeLuca, Father Frank’s sister, accuses Granet of stealing her story and says he will pay for it.

That night, Granet is killed.

The sheriff quickly zeros in on Maggie and she is hauled off in handcuffs. When Father Frank comes to her aid, the sheriff threatens him with jail if he interferes.

A Texas Ranger is assigned to the investigation. Soon he sees Father Frank as a valuable asset.

Can Father Frank stay out of jail and alive, long enough to find the real killer?

Sampler: A Plot for Murder

He was looking out over the beautiful blue lake, when the driver’s side window exploded in his ear, sending glass flying through the car.

INSTINCT AND SHOCK caused Father Frank to duck and turn away from the shattered glass. What on earth happened? When he looked ahead, he was racing for the opposite side of the bridge, toward a low railing that would not keep him from plunging into the lake.

He jerked the steering wheel just as his front fender hit the railing. But the tires grabbed the pavement and he didn’t go over the edge of the bridge. He released the breath he was holding. Suddenly a loud air horn yanked his attention ahead. A gigantic eighteen wheeler was racing directly at him.

He wrenched the wheel to the right. He could see the semi-trailer trying to slow down, but it was too close. He smashed down on the gas. The tires screeched and the Ford jerked forward, barely clearing the lane as the big rig barreled past, less than a foot from the left rear fender of the Taurus. The wash of air from the truck pulled the Ford in to a fishtail. But as he had cut the wheel sharply to the right, now he struggled to keep from plunging over the right side of the bridge. He pulled the wheel to the left and smashed his foot hard on the brake. With tires screaming, he came to a stop, the car rocking slightly on its springs, the right front fender scraping up and down on the concrete barrier some fifteen feet above the water.

Even as he tried to get his breathing under control, he uttered a brief prayer. Thank you Lord for saving me. He glanced in the mirror. The tractor-trailer was just turning off the bridge. And thank you Lord that I did not cause that truck to have an accident.

He was amazed that with all the glass crashing into him, he was not cut. He inspected some of the pieces on his shirt and pants. They were small pieces, and smooth. Lucky. He started to get out and see what damage his car had sustained. But as he opened the door, a horn blared and a car raced past him, the driver yelling something at him.

Good grief. Pay attention. You’re on a two lane bridge, blocking one lane, and almost stepped out in front of a car. He settled back in his seat and took several deep breaths. As his heart rate slowed and his breathing returned to normal, he turned the key. The engine started and he decided checking the damage had best be done off the bridge in a safe location. He looked behind him before starting to straighten the car. What he saw were flashing red and blue lights.

A minute later, Sheriff Bark stood staring in at the priest. “Would you turn off the engine and step out of the car.” It was not a question.

“Should I try to get off the bridge first?” Father Frank asked.

“Just turn off the motor and step out of the car.”

Father Frank switched off the engine and got out of the car. “Something happened and—”

“Have you been drinking?”

“Will you take a breathalyzer test?”

Father Frank’s head jerked a little and he blinked as his brain tried to process what he had just been asked. “Why would you want a breathalyzer test?”

The Sheriff smiled just a little. “What a funny question. To see if you’ve been drinking. Are you willing to take the test?”

The priest shook his head. What was going on? And then he remembered. He had, as usual, taken a small amount of wine at the morning Mass. Probably two ounces. Would that show up on the test? And if it did, what happened next?

Bark shifted his weight from one foot to the other. “We can do that here, or we can take you into the county office and administer it there.”

Father Frank shook his head as if to clear his mind. “Okay. Let’s do it here.”

The Sheriff turned and yelled at his deputy. “Bring the drunk kit.”

“So you say. Let’s see what the machine says.”

The deputy brought the small hand-held machine, which looked like a small hair dryer, and handed it to the Sheriff. “You put a new mouthpiece on it?” The deputy nodded.

Please click HERE to find A Plot for Murder on Amazon.