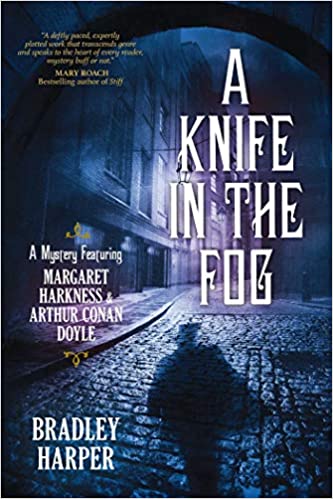 Review: ” Ingenious in its premise and plotting, impressive in its unique forensic precision, infectious in its overflowing passion for the subject matter.”

Physician Arthur Conan Doyle takes a break from his practice to assist London police in tracking down Jack the Ripper in this debut novel and series starter. September 1888. A twenty-nine-year-old Arthur Conan Doyle practices medicine by day and writes at night. His first Sherlock Holmes story, A Study in Scarlet, although gaining critical and popular success, has only netted him twenty-five pounds. Embittered by the experience, he vows to never write another “crime story.”

A messenger arrives with a mysterious summons from former Prime Minister William Gladstone, offering one month’s employment to assist the Metropolitan Police as a “consultant” in their hunt for the serial killer soon to be known as Jack the Ripper. Doyle agrees on the stipulation his old professor of surgery, Professor Joseph Bell–Doyle’s inspiration for Sherlock Holmes–agrees to work with him.

The two are joined by Miss Margaret Harkness, an author residing in the East End who knows how to use a Derringer and serves as their guide and companion. Pursuing leads through the dank alleys and courtyards of Whitechapel, they come upon the body of a savagely murdered fifth victim and it soon becomes clear that the hunters have become the hunted.

Come join the creator of Sherlock Holmes as he matches wits with the man who wields… a knife in the fog.

Sampler: A Knife in the Fog

We were scarcely one street from the murder site when we heard the frenzied shouting of several angry, male voices. The streets in this residential area were sparsely occupied at midday so we quickly noted the crowd of young men behind us chasing a middle-aged smallish man clutching a pair of boots, headed our way. He was being quickly overtaken and as he drew near I saw the yarmulke on his head and unfortunately for him, a leather apron. I noted the boots were newly re-soled. A cobbler.

“Come here!” Bell commanded, and the frightened man halted in our midst, Bell to the right, I to the left, with Margaret and the cobbler in the middle.

The mob, composed of seven young working men, halted, puzzled by this turn of events.

The leader, the largest among them-as is usually the case-could not have been above nineteen years, his fellows anywhere from sixteen to twenty. Young toughs, eager to prove themselves to their fellows.

“Stand aside!” their red-faced captain commanded, “’Less you wants some of what’s coming to ‘im! We don’t want his kind about, and it looks like he needs a lesson!”

“Turn around,” Bell said, ice to his fire, “Or you may be the student. Go about your business.”

“Go on, Tommy!” urged one of the mob-one in the back I noticed, as is also usually the case-” Show ‘im what for!”

Tommy, with his followers at his back, found himself in a tight spot. Pummeling a single, relatively helpless man was one thing. Confronting three men and a woman was quite another. Though they still had us out-numbered by nearly two to one, the odds had changed.

Mobs are ugly things, even one as small as this, and I have come to appreciate that those who incite them quickly become their prisoner. Tommy could not back away now without losing his authority. He was as trapped as the cobbler in this tragic farce.

I saw the look of determination in his eyes and stepped forward to meet his advance, resolute to protect my friends with all the strength I possessed.

I had not sparred in four years but my opponent, while young and strong, was untrained. I knew to watch his shoulders and hips to predict his next move, so easily avoided the energetic but wild “haymaker” aimed in my general direction.

A blow has a very small area where it may be effective; if you step back, it quickly fades in power as your opponent loses his balance. If you step into it, you dilute its force as it is still gaining momentum. I am pleased to say that my return blow to his midsection was perfectly timed and placed. Tommy collapsed on the cobblestones, his face gone from red to purple, as he struggled to find his breath.

The remaining hooligans were not deterred by their leader’s quick defeat, but were sufficiently impressed that they began to encircle us. Bell used his cane effectively, applying his backhand to deliver a smart blow to the elbow of his closest adversary and driving him back as he howled in pain.

Two down. Five to go. The odds were looking better by the moment. The remainder of this sorry lot decided the cobbler or the woman among our party were the easier targets. They began, one at a time, to make quick advances only to back away again, attempting to draw Bell or myself out enough so that others could attack our center.

Another came within my reach and attempted a feint with his right fist, then lashed out with a kick. His hips gave him away however, and I staggered him back with a well-aimed blow to his right ear. I could not subtract him from the total, though he moved further back. He would not be quick to resume the attack.

I do not know how much longer we could have kept at this without one of them getting through our defenses when I and the toughs jumped at the sharp report of a pistol. Margaret held her Derringer aloft, smoke curling from its tiny barrel.

“I have one bullet left. Who wants it?” She said, as though discussing the remains of a meal.

Please click HERE to find A Knife in the Fog on Amazon.