Sampler: A Crime Through Time by John Anthony Miller Review: An excellent Parisian murder mystery that involves two mysteries from different time periods that keeps you intrigued right up to the end!

Paris, 1874: an artist’s model is murdered and a wealthy socialite posing for her portrait is stalked by an unknown assailant.

Normandy, 1956: a young widow inherits a house and finds eight old paintings with a mysterious note that claims they’re clues to a crime. But how did they get there?

A Crime Through Time is a puzzle with pieces that don’t quite fit, a tale of intrigue, honor, and deceit, where lies are truths, fact is fiction, and nothing is ever quite as it seems.

Sampler: A Crime Through Time

A cobblestone street crawled up the hill that led to the artist’s studio. Narrow and winding, made of mismatched brick of brown and gray, people, horses, and wagon wheels traveled upon it, passing from one boulevard to the next. Defined by stone walls, tall at the bottom where the incline began and narrow at the top where it ended, they wrapped the road with a mother’s hand to suggest a security that might not exist. Trees sprouted behind the walls, branches spilling over the capstones, leaves rustling in breaths of wind that bathed the street and city sprawling beyond. The ancient wall and crumbling mortar that glued it together created an illusion of a country lane—not an alley tying bustling boulevards together. But then, Paris had always been a land of illusions, a city where you saw only what you wanted to see and pretended the rest did not exist.

It was almost dark when the artist’s model stepped from the studio on top of the hill at the end of a crooked road that wound its way to the boulevard. Her blonde hair spilled onto a green dress that flowed to leather shoes, the cloth mended with a subtle stitch just below the breast. She peered down the hill as she closed the door behind her, a gas streetlight on the distant corner casting a muted glow on passing carriages, horses hooves clicking in cadence on the cobblestone street. The sun had faded, leaving an auburn stripe at the base of the western sky, fading into the horizon as darkness stole the day.

At the top of the hill, a jumbled row of townhouses stretched in a line from the studio, flickering candles in their windows flinging shadows on the street below. On the incline, where the walls rimmed the road, a dark tunnel carved through trees, light from the boulevard shimmering at the opposite end. Branches hung over the road and swayed like monsters’ limbs about to grab their prey.

The model paused and eyed the lane. The street was bare—no coaches, bicycles, or passersby—only branches soughing in the wind. Children played in their houses, mothers made their suppers, fathers drank beer at nearby taverns after long tiresome days in factories and shops. Convinced she had nothing to fear, even as eerie as the road might seem, she started down the incline. She stayed close to the street, intimidated by the wall and all she imagined was behind it—shadows of those who would never be known, plotting deeds too evil to fathom. At its shortest elevation, where the capstone kissed the pavement, lavender spilled over the top, and she smelled the sweetness as she passed. But as the walkway descended and the wall spread higher, whatever it hid was veiled in mystery—if, indeed, anything even lurked there at all.

She took a dozen steps and glimpsed a shadow. She paused, her pulse starting to race as she peered into blackness, studying silhouettes from dancing branches, amused that shadows seemed so daunting. After walking a few feet farther, a faint noise marred the night, and she turned, eyes wide.

An auburn cat near the base of the wall scurried to brush her leg.

She gasped. “You scared me, little kitty!” she exclaimed, laughing as she bent to pet it.

The cat rested on its hindquarters, purring loudly, king of the road and all its domains. The woman caressed its head and neck when an unexpected noise, like a shoe scuffing stone, scared the cat, and it darted down the alley.

The model rose, eyes wide, muscles tense. She scanned the road, listening intently, but saw nothing nearby, no one behind her, only silence tainted by the bustling boulevard below—a lone carriage pulled by a tired mare rolling down the road. She quickened her pace, hurrying down the hillside, almost half her journey completed.

The sound repeated, the scuff of a shoe, and she looked in both directions, her heart thumping against her chest. She examined each crack and crevasse in the uneven stone that made the wall, studied windows in houses high on the hill, and searched for a face that might peer from within. But none did. She listened intently for anything that might make a noise—people, animals, or branches that moved and scraped stone. But all was still, save for the faint chatter of leaves as the breeze disturbed them.

As she turned to go, she suddenly gasped, eyes bulging, as calloused hands wrapped around her neck, squeezing tightly. She screamed, or tried to, but only a whisper escaped, the grasp too tight and confining. Her muffled gasp, followed by the faintest cough, barely disrupted the night and was heard by no one at all.

“Don’t move,” a voice hissed with breath stinking of beer. “It’ll be easier. You won’t suffer.”

Her arms flailed in weak defense, and she kicked the man behind her, the sole of her shoe banging his shins. But the more she struggled, the tighter the grasp, his fingernails digging deeper, ripping the fragile skin on her throat. He pulled closer, his hold tighter.

She tried to scream again, looked wildly up the hill, but found a deserted lane. Her assailant chose the darkest recess, midway between the boulevard below and the houses on top of the hill. She squirmed, growing weaker, clawing at hands that clasped her neck, tearing his flesh with her fingernails. Her tongue swelled, her mouth agape, as she gasped for breath that escaped her, no matter how hard she fought. She yanked the hands that held her, trying to loosen their grasp, and swung her arms wildly, battering his torso with her elbows, each blow fainter than the last until they barely landed at all. She kicked his shins with the heel of her shoe, but he ignored her, squeezing tighter.

“There now,” he said in a raspy voice. “Sleep, little angel.”

Please click HERE to find A Crime Through Time on Amazon. 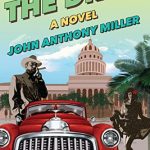