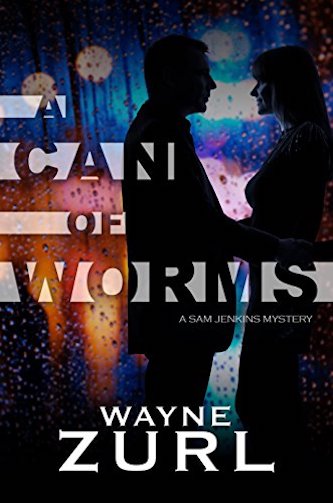 Now, Finchum is accused of a rape that occurred when he attended college in Chattanooga three years earlier.

The young man claims his innocence, but while investigating the allegations, Jenkins uncovers corruption in the local sheriff’s office, evidence that detectives mishandled the rape investigation, and the district attorney lost the entire case file.

False accusations, scandal, and extortion threaten to ruin Jenkins’ reputation and marriage unless he drops the investigation.

Sampler: A Can of Worms

I wore my navy blue suit with a pale yellow shirt, striped tie, black wingtips, and a pair of black wool socks. I was neat, clean, shaved and sober, and I didn’t care who knew it.

My apologies to Mr. Chandler for the obvious paraphrase. But since I’ve already committed what some might call blasphemy, I’ll continue to hover slightly above plagiarism and refer back to Philip Marlowe’s first thought from a page of hardboiled fiction and embellish my own story.

It was about one o’clock in the afternoon, mid-June, with the sun not shining and a look of hard, wet rain in the clearness of the foothills.

Only my foothills were those of the Great Smokies, not Marlowe’s Hollywood Hills.

I wasn’t a private detective. I was a police chief, and I only owned a new suit because my wife insisted I needed something more up-to-date than my closet full of thirty-year-old Harris Tweed sports jackets.

The similarity I shared with Philip Marlowe or Doghouse Reilly, the name Marlowe used when he introduced himself to Carmen Sternwood in that famous opening scene, was that I too intended to call on four-million-dollars.

In 1939 when Raymond Chandler published The Big Sleep, four million bucks could set the world on its ear. Today, that’s only a little more than Warren Buffet’s lunch money. But power isn’t measured in cash alone. The man I planned to visit looked extremely well off. He was, by no means, the wealthiest man in Blount County, but he ranked among the most powerful.

Retired Judge Minas Tipton lived in a sixty-year-old brick home in a beautiful section of Maryville, Tennessee. Two days earlier, he invited me to have lunch with him.

Generally, when the judge and I got together, it happened because one or more of the local politicians were upset with my official shenanigans. That day was no different. I knew exactly what the topic would be.

I used the big brass doorknocker to announce my presence. In sixty seconds, the judge’s housekeeper, Loretta, opened the door.

“Good mornin’, sir.” She spoke with a soft East Tennessee accent and gave me a friendly smile. “Come on in an’ I’ll git the judge for ya.”

I stepped into the living room, a place Loretta called the parlor. The furnishings were all early Federal period antiques, class all the way. If I didn’t know who I had an appointment with, I might have thought I’d be visiting Rhett Butler.

Loretta stepped into the hall and looked into a private office across from the parlor. “Judge, Chief Jenkins is here.”

I heard him stand and send a swivel chair sliding away from his desk. A moment later, I saw him.

I shook hands with the dapper old man. He was pushing ninety but could have passed for fifteen years younger.

“Good to see you, Judge. Here, I brought you something I think you’ll like.” I handed him a bottle of white wine.

I’d been on a Viognier kick ever since a friend who knew his liquor suggested it. I thought my twenty-dollar bottle of Napa Valley wine was just the cat’s ass, and since the judge was never at a loss for a supply of tasty hooch to go with lunch, I knew he’d appreciate the gesture.

“Damn it, Sam, ya didn’t have to do that, but I’m glad ya did. I’ve had this before and just love it. Love it indeed. Now why don’t we sit down, and I’ll have Loretta fix us a couple o’ drinks.”

We sat in his elegant living room. Loretta brought us drinks, his bourbon, mine scotch.

The judge held up his glass and toasted me. “Well, here’s to ya, Sam—all the best.”

We both took a sip.

“I saw that scotch yer drinkin’ and was just taken with the label,” the old man said. “I thought of ya and bought a bottle. How do ya like it?”

I swished the scotch over two ice cubes in a short glass. Loretta remembered how I liked my whisky. I took another quick sip.

“Excellent,” I said. “Famous Grouse is a great blended whisky. I like it as much as that moonshine the Chivas brothers have been peddling for centuries.”

The judge always provided his own laugh track during a conversation. When I first heard it, I wasn’t sure if he was putting me on or it was genuine. I’m still not certain, but it’s his way, and it’s always there.

“You made a good choice, Judge. Thanks for thinking of me.”

The old cutthroat smiled and sipped his bourbon. That day it came from Buffalo Trace.

“Sam, I’ve been told you’re kickin’ up some dust in the barnyard again. I don’t suppose ya give a hoot, but you’ve ruffled some important feathers.”