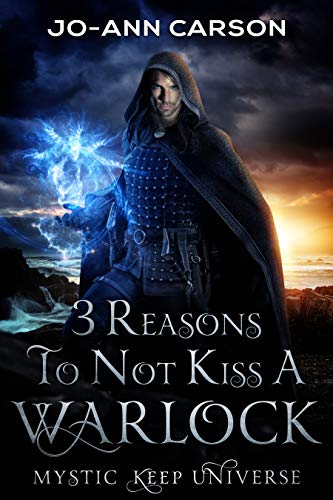 For those who like paranormal women’s fiction, witchy romance with a side of humor, and/or a slice of saucy urban fantasy.

Powerful magic drew me to a cozy, Pacific Northwest town called Mystic Keep, a sanctuary for badass witches like me. It’s the sort of place where things go bump in the night—every night—and anything can happen. But that’s not what scared me.

My name is Merlina Black and I’m a middle-aged enchantress whose flown around the block a few times. But when I met the warlock, Donovan O’Reilly, my heart sputtered. That’s what terrified me.

But, the devilishly-handsome Donovan short-circuited my circuits, stirred my cauldron, and hexed my hormones. Since bad luck and good magic happen in threes, I figured the cure for my infatuation was to find three, good reasons to not kiss him.

When Donovan asked me to join him in his lair to conjure sorcery to save the town, our lives changed forever.

Will our shared magic be strong enough to save Mystic Keep?

Will I survive this experience with any circuits left to fry?

And will I find a good reason to not kiss the warlock? You need to read my story to find out.

This is a steamy, stand-alone novella, a supernatural-romance set in the Mystic Keep Universe. If you like paranormal women’s fiction, witchy romance with a side of humor, and/or a slice of saucy urban fantasy, you’ll love this story.

Sampler: 3 Reasons Not To Kiss A Warlock

As I drove down the winding dirt road to Mystic Keep, a seaside sanctuary for badass witches like me, I wondered if my ex was finally right about something—I had lost my mind. Maybe I had. In one afternoon, I quit my job, gave a stranger the keys to my lakeside cabin, and emptied my bank account into a duffle bag. I shrugged and kept driving. None of that mattered now. All that mattered was that I get to that town before the rise of the Blood Moon.

Packed to its ceiling with boxes of clothes, herbs, and potions, my vintage, blue, rust-bucket of a Volkswagen van sputtered around the final curves in the road. The put-put sound of the engine started a few miles back, but I didn’t dare stop. I held my breath and eased up on the gas pedal, allowing gravity to help me travel the last few miles.

Dark clouds danced along the horizon, making it hard to see the sunset, but I could feel the pull of the almost-full moon waiting to appear. I didn’t have much time.

As I rounded the last bend, the town came into sight. I passed through small acreages with farmhouses, barns in various states of repair, and barking dogs. I rolled through clusters of west-coast dwellings with large balconies overlooking the bay. Finally, I came to the center of town, a collection of turn of quaint storefronts that would fit nicely in a travel brochure. I turned on to the main street and parked my van in front of a café called The Perfect Brew.

I didn’t need to check a map to confirm my destination. Magic thicker than honey and more persuasive than quicksand pulled me inside. The sign hanging slightly askew beside the door held the invisible signature of a powerful sorceress, Ophelia Black, my great aunt.

I swallowed hard and, in my hurry, slammed the van’s door on my familiar, Plums. He’s a male Siamese cat who has been with me for all of my forty-five years. He cursed me in Egyptian, and with his bent tail standing high, followed me inside the brick building.

The café looked like any other coffee house in the country. People lined up at the bar on the left side of the room for drinks and food. Small tables filled the rectangular space, and on the far end, a wood fire crackled in an enormous stone hearth. Soft jazz played through the speakers loud enough to be heard, but not so loud that it drowned out the laughter, chatter, and sounds of steaming espresso machines.

Yup, it was like every other caffeine-soaked joint in the country, except that it wasn’t. The intoxicating smell of good coffee blended with the toasted-almond aroma of potent magic. Behind the bar, Oscar, the barista, adeptly wiggled his fingers over the top of the drink he prepared. He looked up at me and smiled. He was a kitchen witch, and at least half of his clientele had magical power.

Stepping into this town was always transformational. I felt as if I entered another dimension, a place where I actually belonged. I soaked it in.  Here, there be sorcery—serious sorcery. I bit the inside of my cheek.

Two werewolves, I guessed to be in their twenties, sat in one corner holding hands and making goo-goo eyes at each other. By the fire, a group of teenaged witches giggled as they shared photos on their phones. And if my nose served me well, and it usually does, two wizards chatted in the center of the room, and three warlocks stood by the back door.

If I wasn’t on a mission, I would fall in love with this place, commit the rest of my life to support it, and maybe even pay taxes. But the Blood Moon called me, and her call could not be denied.

I sat down at the only empty table and considered my next step. In my haste to get to Mystic Keep, I had put all other thoughts aside. Now I needed a plan. Before I could complete that thought, a green mist that smelled worse than a sewer flowed around me. I wanted to gag.

The chattering stopped. Everyone around me froze. I blinked.

The wizards stood and backed away from each other. Blue sparks flew from the shorter one’s hands. Dressed in denim overalls and a blue-plaid flannel shirt, he looked more like a farmer than a sorcerer. His thin weathered face tensed with anger.

The taller wizard stopped the sparks with his right hand. He wore a leather jacket and jeans. “Enough,” he said. “This is not the place.”

The shorter guy growled. “Son, you should have thought about that before you asked to meet me here.” He recited an incantation in Latin, which I could barely hear.

Sitting two yards away from them, I had a front-row seat to their argument. I scanned the room. Everyone else appeared to be frozen.

Getting involved in this drama would be stupid, I told myself. This wasn’t my circus, and these weren’t my wizards. Domestic squabbles could be dangerous, and one involving wizards … Well, there’s no telling what could happen. They have mercurial mood swings and no respect for other people’s property.

The floor beneath me trembled, making a low rumbling sound. Even the building was unhappy. It really, really wasn’t my business, I reminded myself.

As the energy beneath me grew, I felt as if I stood on the precipice of a volcano. Steam rose through the cracks in the wood floor. It smelled of sulfur, like dying souls and anger.

I bit my bottom lip. If I interfered, there was no knowing what the wizards would do to me. It wasn’t my rodeo, and I wasn’t a cowboy.

A long wooden staff appeared in the right hand of the father. He stomped it twice on the floor and glowered at his son.

The son winced. “You wouldn’t dare,” he said.

For the love of all that’s holy, I really hoped the old wizard didn’t dare. What could a third stomp do? The most potent magic always comes in threes. I could only guess what would happen next, and none of my guesses were good.

As the tension between the wizards grew, the building’s steam increased, making a hissing sound like a snake.

I shouldn’t get involved, I told myself. Not in a town I didn’t even live in. Not in a town where almost everyone had supernatural powers. And definitely not with wizards!

The father lifted his staff. “If I have to teach you a lesson, son.”

No, I thought. No. Please, don’t stomp the staff a third time.

“Ha,” said the younger wizard. “I dare you, Pops. I dare you.” He scoffed. “You don’t have it in you.” He chanted an incantation in a low rumbling voice.

Jeeze! I wished these mages could speak louder. I took a deep breath and centered my energy. I needed to be ready for any eventuality. Be calm, I told myself, be calm, as if there were a possibility of that.

The older wizard flicked a side-glance my way. “Sorceress, don’t interfere,” he said.

Urgh. Just urgh! Most days, I flowed through crowds unnoticed, melding with the masses, and drawing as little attention to myself as possible. But not today. Since I was outed, I stood and pulled out my crystal wand for protection.

Both wizards turned and stared at me. The son stopped his mumbling, and the father withdrew his sparks. But the green mist of their combined magic continued to freeze the room. “Who are you to interfere?” asked the elder.

As I opened my mouth, the wind grabbed my words and scattered them to the floor. Plums jumped onto my shoulders and wrapped his tail around my neck. I reached deep inside myself for wisdom. Any wisdom would do. But the well was dry.

I spoke from the center of my magic, “I, Merlina Black, call on the power of the moon to do my bidding. I …”

A bright light flashed through the room, and a cloud of silver smoke descended. Out of the smoke stepped a warrior mage dressed in full battle gear. He stood in front of me and drew his sword.

I lowered my wand. “Just what the party needs. A warlock.” I sneered.

Please click HERE to find 3 Reasons Not To Kiss A Warlock on Amazon.