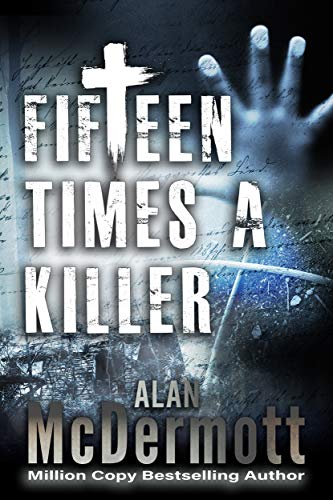 Review: A gripping, dark, and haunting voyage into the mind of a murderer. Not for the faint-hearted.

When journalist Jess Duffey gets the first chapters of a bad serial-killer novel, she dismisses it as a prank, a ploy for publicity.

Until she follows the writer’s directions to the grave and stumbles head-first into an FBI investigation of a grisly cold case.

The manuscript is not fiction. It’s true crime.

The killer wants Jess to publish his account, word for word, and doing so is the only way Jess and FBI Agent Corrina Stone can find the killer before he completes his evil mission: to kill Fifteen Times.

Fifteen Times a Killer is the latest blockbuster from million-copy bestseller Alan McDermott.

Sampler: 15 times a killer
Jess wished she’d brought suitable footwear. Trying to navigate her way through the scrub in two-inch heels hadn’t been her smartest move. On the drive over, she’d been thinking about the headline for the piece she was going to write. All she could picture now was, “Third-rate hack twists ankle and dies alone in State park.”

Jess slipped her shoes off and cursed herself for wanting to look taller. As if being five-ten was going to change peoples’ perception of her. She’d still be geeky, frumpy Jess, crazy-cat-lady-in-waiting, destined to die alone from a Haagen-Dazs overdose.

She checked her phone again to see where she was in relation to the marker, then looked where the app directed her.

Why did you have to bury her on a hill, you sonofabitch?

She was already sweating from the short walk from her car. By the time she was done, she’d be soaked through.

At least I’ll lose a couple of pounds.

Then a thought struck her: what if there was no body, no serial killer? What if her colleagues had fabricated the whole thing just to force her into doing some exercise? They’d be in the office now, congratulating themselves on such a great prank. They might even be waiting back at the road when she returned from her trek, panting like an imbecile and stinking like a jock’s locker.

Jess shrugged the idea off. No one at the office was that callous, not even the vacuous Claire McMillan. Though many would have done something similar in school, the work environment was a different matter. For one, the litigation culture meant such shenanigans were career-ending, and none of her colleagues would risk their livelihoods just to see her humiliated.

Jess put her shoes back on and trudged forward. She reached the foot of the hill and peered at the crest, then checked her phone once more, hoping the marked square had moved. It still lay dead ahead. She swore at nothing in particular, then began her ascent.

She stopped after thirty yards, leaning against a rain-starved tree as she fought to catch her breath. Her chest heaved, her vision blurred.

There had been a time when she could walk at least a couple of miles and not break a sweat, but years of soft living since leaving home had taken their toll.

After vowing to buy herself an exercise bike the moment she got home, Jess set off once more, one eye on the app with the other watching out for obstacles in her path.

It took half an hour under the blazing sun before she reached the plateau, and Jess was ready to drop. She collapsed onto a log, and as she waited to get her breathing under control, she looked around.

There was no dead body, but then she hadn’t really expected one. Joanne had been killed nine years earlier, so unless he’d kept her in the freezer all this time, she must be in the ground. If he’d just dumped the body, wild animals would have picked it clean by now.

Jess got up and started to look for signs of disturbed soil, but again came up empty. What she did find were two crossed sticks lying on the ground. Standing over them and checking her app again, she saw that she was in the right place.

Now she had a dilemma: start digging and possibly destroy any evidence that the killer might have left, or call the police and let them know that she’d received the letter? She realized that either way, the police would have to know that the killer had been in contact with her. If she decided to dig and found Joanne Perry, she would have to tell the police how she came to know the body was there. If she just called and told them about the killer’s letter and manuscript, they might not believe her.

She settled on the latter choice, and if the police didn’t believe her, she’d come back and start digging. Jess then chided herself for not thinking of it earlier, before she’d subjected herself to the mammoth trek.

She took a few pictures of the crossed sticks on her phone, then turned to leave.

And found herself staring down the barrel of a gun.

Please click HERE to find 15 Times A Killer on Amazon.