Dr. Robert G. Williscroft is a retired submarine officer, deep-sea and saturation diver, scientist, author of numerous books and hundreds of articles, and a lifelong adventurer.

He spent 22 months underwater, a year in the equatorial Pacific, three years in the Arctic ice pack, and a year at the Geographic South Pole.

He holds degrees in Marine Physics and Meteorology, and a doctorate for developing a system to protect SCUBA divers in contaminated water.

A prolific author of both non-fiction and fiction, he lives in Centennial, Colorado, with his family.

With a security clearance above Top Secret, Mac and his off-the-books deep-water espionage group must gather Russian intel to avert world war.

Join nuclear-submariner Mac as he extreme-dives to a thousand feet, battles giant squids, and proves what brave men can achieve under real pressure, the kind that will steal your air and crush the life out of you. Piloting their prize through the ice pack to the U.S. East Coast, they must evade or confront other Soviet subs trying to recover the sub—or sink it.

Too far from Teuthis to escape, the Americans are accosted by a 5-ton orca.

Will Mac’s ship survive long enough to reach friendly waters, or will the men become just another meal for a deadly whale? 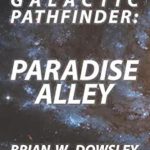