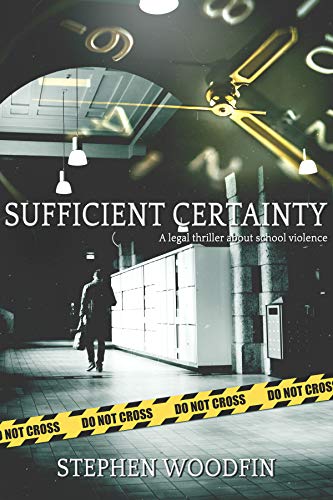 The desperate search for truth and justice in the aftermath of a small-town school shooting.

Right off, let me say that I believe Stephen Woodfin is one of the most accomplished writers on the market today. His stories are as fresh as the news reports you read or see on television news.

And his newest work, Sufficient Certainty, rips the bandage off a wound that terrorizes our every thought as we send our children to school each day.

What if someone carrying a gun walks into a classroom?

Is it a bluff?

Is he showing off?

Is he simply trying to prove how tough he is?

Or does he have murder on his mind?

Is he trying to settle an old score?

Or is he trying to become instantly famous with his name and face pasted into every newspaper and plastered across every television screen in the country?

A shot is fired.

The shooter is arrested.

But is he really the shooter?

What if the shot came from someplace else?

Sufficient Certainty is a violent tale.

It is a compassionate tale.

It grips your heart and won’t let it go.

There is a rush to judgment.

But what is the truth?

Sometimes, a community is scared of the truth.

And Stephen Woodfin has the rare talent to explore the depths of an ugly truth.

He understands the fight for justice.

He lives in a small town.

He understands the threads of centuries-old prides and prejudices that are woven into a small town.

He has been on the school board.

He understands the agony that permeates from the fear of school violence.

Sufficient Certainty is not quite like any book you have ever read before.

It makes you think.

What if you never know what happened?

What if you see reality and refuse to believe it?

What if you look in a mirror and see reality staring back at you.

The facts will haunt you for the rest of your life.