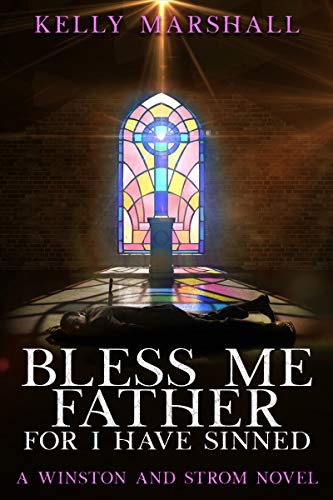 Kelly Marshall’s writing is clear, crisp and powerful. Her words build suspense and invoke fear. Every sentence has the impact of a pistol shot.

A charismatic and popular priest, Father Michael Dunne is brutally stabbed to death in the confessional. The Seattle Catholic Community is stunned and in mourning for a cleric who served not only the people in his parish but many in the Northwest’s burgeoning homeless and drug-addicted communities.

Seattle homicide detectives Nick Winston and Pat Strom find Father Mike face down in a pool of blood with multiple stab wounds to his body. Because the attack was so savage, the police surmise the killer knew the pastor. What in his past could account for the highly personal nature of the crime? Was he murdered by a penitent scared that the priest would break the seal of the confessional? Or did an illicit love affair come back to haunt Michael Dunne?

Like all Kelly Marshall novels, the story behind Bless Me Father for I Have Sinned rises from the shadows on the dark side of the street.

A priest is murdered.

He’s a friend to all mankind.

Who would want to kill him?

Was it a robbery?

Did a druggie need money for his next score?

Is a serial killer on the loose?

Or did Father Michael Dunne carry a dark secret that only death would expose?

And she deals out the deadly clues in a slow, methodical, and agonizing fashion.

You scream for answers.

Are you sure you really want to know what only the Father and the killer know?

They battle fear and frustration with dark humor.

Every sentence has the impact of a pistol shot.

“She completed the rosary and opened her eyes. What was taking Father Michael so long with the last penitent? She tried not to judge, but surely someone has confessed mortal sins. Otherwise why would a priest have to counsel him so long? She had been here a half hour, and the same person had been in the room with Father all this time. Had the priest left through the door on the other side of the confessional? She looked up to see the light glowing red, indicating he was still in the room. She reached down to gather her purse from the floor and gasped at a stream of red seeping from beneath the confessional door.”

They are used to following trails that lead to nowhere.

They know that sooner or later, they will find the right one.

But the pieces of the puzzle never quite seem to fit together, and those final and surprising answers, they realize, never come as easy as death on the wrong side of Seattle’s streets.

Kelly Marshall’s mysteries are the told the way they should be told, the way Raymond Chandler and Dashiell Hammett once told them.

Please click HERE to find Bless Me Father for I Have Sinned on Amazon.