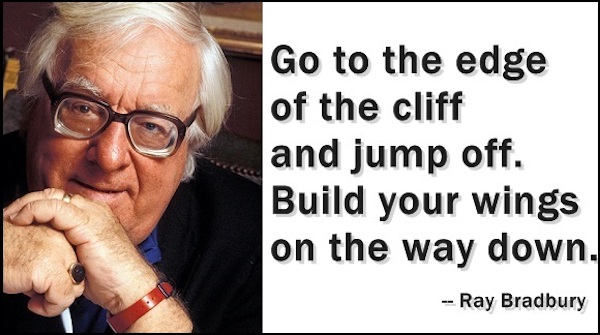 Don’t Think. Thinking is the enemy of creativity.

Bradbury had once been called “the poet of the pulps.”

But after publishing Fahrenheit 451, he was a literary sensation, writing strangely lyrical prose with the touch of a poet, telling stories that simmered with melancholy and nostalgia.

He said, “I write all the time. I get up every morning not knowing what I’m going to do. I usually have a perception around dawn when I wake up. I have what I call the theater of the morning inside my head, all these voices talking to me. When they come up with a good metaphor, then I jump out of bed and trap them before they’re gone. That’s the whole secret: to do the things that excite you. Also, I always have taken naps. That way, I have two mornings. My stories run up and bit me on the leg. I respond by writing down everything that goes on during the bite. When I finish, the idea legs go and runs off.” 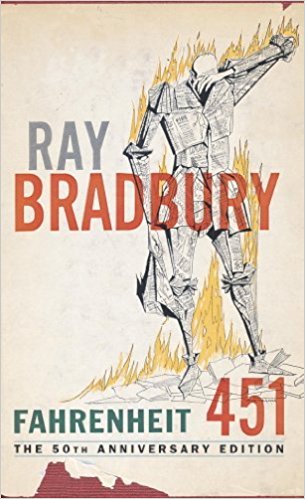 He has given this advice for writers:

* Make Lists. I began to make lists of titles, to put down long lines of nouns. These lists were the provocations, finally, that caused my better stuff to surface. I began to run through those lists, pick a noun, and then sit down to write a long prose-poem-essay on it. Somewhere along about the middle of the page, or perhaps the second page, the prose poem would turn into a story, which is to say that a character suddenly appeared … and the character would finish the tale for me.

* Write with Zest. If you are writing without zest, without gusto, without fun, you are only half a writer.  For the first thing a writer should be is excited.

* Run Fast, Stand Still. What can we writers learn from lizards, lift from birds? In quickness is truth. The faster you blurt, the more swiftly you write, the more honest you are. In hesitation is thought. In delay comes the effort for a style, instead of leaping upon truth, which is the only style worth deadfalling or tiger-trapping.

* List Ten Thing You Love and Ten Things You Hate. Then write about the former and “kill” the latter – also by writing about them. Do the same with your fears.

* Write for Kids. Do you know why teachers use me? Because I speak in tongues. I write metaphors. Every one of my stories is a metaphor you can remember. The great religions are all metaphors. We appreciate things like Daniel and the lion’s den and the Tower of Babel. People remember these metaphors because they are so vivid you can’t get free of them, and that’s what kids like in school. Other writers wrote in metaphors: Edgar Allan Poe, Herman Melville, Washington Irving, Nathaniel Hawthorne. All these people wrote for children. They may have pretended not to, but they did.

Ray Bradbury had a simple creed about the life he lives. He said, “If we listened to our intellect, we’d never have a love affair, we’d never have a friendship, we’d never go into business because we’d be cynical. Well, that’s nonsense. You’ve got to jump off the cliffs all the time and build your wings on the way down. Work is the only answer. I have three rules to live by. One, get your work done. If that doesn’t work, shut up and drink you gin. And when all else fails, run like hell.”