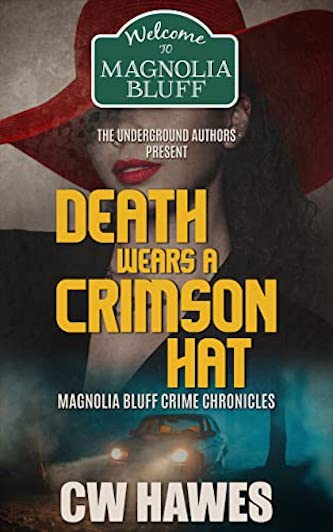 A well-written mystery filled with characters, especially members of the Hats, who are deeply flawed and very believable.

And a murder that could reveal all.

Harry Thurgood just wants a quiet life, and to leave his past in the past. And he thinks he’s found the perfect place in sleepy Magnolia bluff, Texas. Until the murder of a prominent citizen threatens to let the skeletons out of his closet.

The thought of small, southern towns can evoke a sense of coziness. When I picture living in one, I imagine a less complicated, easy-going life. I think about meeting friendly folk and going to a local bakery that serves lots of yummy pastries.

The fictional town of Magnolia Bluff does have an excellent bakery, and there are good people living there. However, there’s also an element that makes it less then desirable. That element is made up of southern ladies. They call themselves the Crimson Hat Society and are often referred to as the Hats.

The Hats are led by a clever woman named Mary Lou who has an aptitude for finding out the secrets others want to bury. She also uses insinuation and rumor to turn residents of Magnolia Bluff against whomever Mary Lou deems unacceptable. Seemingly safe to say and do as she pleases, Mary Lou uses her knowledge and her tongue to control and punish in whatever way she sees fit. As her power to inflict her will on others grows, whoever she chooses as her next victim better be prepared for a venomous attack. Some will be forced to pack their bags and leave Magnolia Bluff.

Death Wears A Crimson Hat is a well-written mystery. It’s filled with characters, especially members of the Hats, who are deeply flawed and very believable. Mary Lou’s unprincipled character is one that evokes both dread and disgust. So, I’d have to say that the author, CW Hawes, definitely elicited an emotional response in this reader.

Hawes also used character personalities, dialog and action in a way that kept me completely engaged throughout the book. Great job, Mr. Hawes! This is a story that I can highly recommend.

As a long-time fan of CW Hawes, I am always ready to gobble up whatever he has on offer. Hawes’ significant intelligence tends to manifest in whatever genre he writes.

This has led to excellent work in classic mystery, dystopian world building, and weird fiction. Now he is up as a member of the Underground Authors, delivering the first of nine crime novels over nine months, set in the small town of Magnolia Bluff, in central Texas.

Death Wears a Crimson Hat sets the bar high. Ember Cole is a local pastor. Harry Thurgood, a man with a past, runs a coffee shop. They are drawn to each other, but life gets complicated quickly after a member of the local Crimson Hat society is murdered.

Against a background of plotting and behatted ladies mewing in the pews, they have to track down the killer before the crime is pinned on Ember, or they are murdered themselves.

Death Wears a Crimson Hat is a crisply written, character-driven thriller; as colorful as the title suggests. Highly recommended over a dark roast on a warm morning in Texas.

CW Hawes, a master storytel!er and a memher of The Underground Authors, introduces readers to Magnolia Bluff. His is the first book in the crime series.

In his Death Wears a Crimson Hat, Hawes very cleverly guides Harry Thurgood down several rabbit trails as he works to prove the Reverend Ember Cole innocent of the murder of two women.

After all, she is the woman he loves. But insists that despite the rumors about their relationship circulating around town she and he are only good friends. Both Harry and Ember have pasts they prefer no one ever uncovers which begs the question: What are they hiding?

The members of the Crimson Hatters are controlled by their Queen Mary Lou, who knows all of their sins. They do her disreputable bidding to ensure Mary Lou’s keeping quiet about their personal business. Mary Lou runs not only her “girls” but also tries to run Ember Cole out of the pulpit.

Mary Lou’s vendetta against the minister lays the foundation for all of the fatal misconduct of the good citizens of Magnolia Bluff. Malicious gossip, false accusations, promiscuous behavior, murders, and attempted murders follow.

The fast pace of gossip provokes the reader’s curiosity so much so that it’s difficult to stop reading until the Crimes are solved.