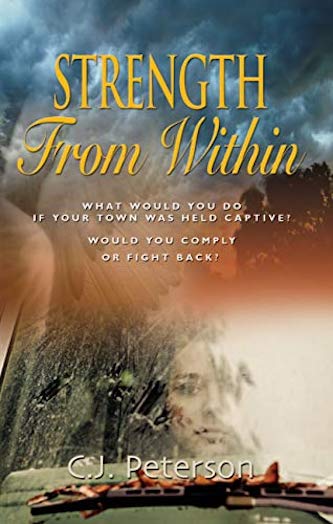 I would have never expected it in a Christian novel, but the suspense is riveting.

Pine Crest is a quiet little Ohio town just outside Cleveland. To the outside world, it seems to function as any other small town. However, upon closer inspection, Stacey and her father, Sam Spencer, discover the dangerous secret that is this town’s reality. Corruption has such a massive stronghold; survival seems to be the way of life.

Asserting her normal independent attitude in this new environment as the new kid in town could find Stacey in trouble. However, the strength inside her forces her not back down. Once Sam figures out what is going on, he cannot turn a blind eye to it either. By fighting back, can the Spencers help free this town from its bonds?

Will it ignite a spark of hope or an all-out war?

What would you do if your town was held captive? Would you comply or would you fight back?

Isaiah 40:31: But those who hope in the Lord will renew their strength. They will soar on wings like eagles; they will run and not grow weary, they will walk and not be faint.

Two afternoons about a week ago, I read C.J. Peterson’s young adult novel, Strength From Within. I waited to write this review because the events she described in the book caused me to reflect on some of my former high school students and the tragedies they experienced in their young lives. A high school, whether it’s in a small community like Pinecrest or a neighborhood in a large city, is a mirror reflection of the world in which it sits.

Stacey and her father Sam Spencer thought they could escape a tragedy. You see, Sam’s wife and Stacey’s mom, Lauren, was killed in an automobile accident. Both father and daughter were hurting in silence. The intensity of their emotions was driving a wedge between them. Fortunately, Sam had an opportunity to practice law in Pinecrest. Both he and Stacy were ready for a change. Move to a new town. New job. New friends. New school.

What could possibly go wrong?

The transition was a smooth one until Stacey enrolled in the local high school. There, she encountered opposing groups. One led by the school bully Kyle Chandler, who along with his crew did everything possible to recruit Stacey to join their gang.  Kyle wanted to date Stacey, but she had a bad feeling about him and his friends.

The school had another group, one that Kyle ridiculed. It was led by a different type of leader – a young Christian named Alex. He and his friends embraced Stacy, trying with all their might to protect her from the group led by the school bully. They changed her life when they introduced Stacey to Jesus. However, converting to Christianity did not make Stacey’s life any easier. She remained loyal to her new best friend Alex and joined the local church group.

Kyle and his friends took action, causing Stacey to endure two trips to the hospital. That was the last straw for Sam Spencer. Dealing with the school principal, Sam discovered that the town of Pinecrest had secrets, the kind that were deadly. He and Stacey stood together to not only clean up the school atmosphere but also the evil within the community.

During their struggles, they understood the quote by Amy Morin: “Being mentally strong doesn’t mean you won’t feel afraid. Instead, mental strength is about feeling afraid and doing it anyway.”

C. J. Peterson’s book lets young adults know that sometimes doing the right thing is not always the popular thing, but with God’s help, all things are possible through Him.

With Stacey Spencer, author C. J. Peterson has written one of the more memorable heroines I have ever discovered in the printed page.

She has an interest in this Jesus guy she keeps hearing about.

But her life is about to change.

Her mother dies when the car she’s driving spins out of control on icy roads, and Stacey faces a life she never expected. As C.J. writes: For the next several weeks, everything sounded hollow as her world spun around her at a high rate of speed. She felt as if she were watching things from a distance. She felt disconnected from her world. She could not imagine how she would exist in a world without her mother.”

Her father, an attorney, believes he and Stacey need a fresh start.

And Pine Crest seems like such a nice community to call home.

Looks can be deceiving.

Stacey finds herself within the grips of a corrupt little town where people are disappearing, people are missing, men in black walk the streets, and there are gunshots in the night. Evil lurks in the shadows.

Is Strength from Within a horror story?

Are the scenes graphic and bloody and scented with the smell of death?

Is the novel Christian fiction?

When all is lost, Stacey and her boyfriend Adam are thrown into a dark pit stacked with corpses of those they knew in town.

Both are suffering from bullet wounds. Neither sees a way out.

But earlier, Stacy had looked up and said, “God, if you’re there, we could really use some help down here.”

And she waits to find out if He was listening.

I would have never expected it in a Christian novel, but the suspense in Strength from Within is riveting.

Please click HERE to find Strength from Within on Amazon.