Air travel has become a lot more hassle over the last few years. We all understand that we have to arrive at the airport early to compensate for extra security measures, and we can no longer carry on our fingernail clippers and other weapons of mass destruction. However, waiting in long lines and being forced to surrender our eyebrow pencils are minor irritations compared to the ordeal of my return flight to Kansas City from California.

I arrived two hours early at the Ontario, California, airport for the first leg of my return, the flight to Denver. I waited in the check-in line for two hours, boarded my flight on time, and settled back, pleased things were going so well.

I was incredibly naïve.

A woman with two small children took the seats in front of me. Those children seemed to be named “Brother” and “Sister.” Mommy had never heard of a baby name book.

Not to be outdone by her offspring, Mommy spoke loudly and incessantly in a high-pitched voice. “Brother, I need you to cooperate with me and think happy thoughts. Sister, you need to leave brother alone. He’s grumpy today. Sister, I need you to go to a happy place. Let’s think about six weeks from now when we’re going to Mexico.”

I turned to the man beside me. “Write that down. Six weeks from now, under no circumstances should we or anybody we love travel to Mexico.”

Mommy continued her monologue while the captain announced we would not be departing on time because half the passengers were stuck in those two-hour check-in lines. Those of us with connecting flights were not going to be in a happy place.

I suggested to the hostess that, since we had to wait, our connecting flights should wait for us. She smiled and said that would not be possible. She continued to smile when she said the flights we were missing were the last flights of the evening. I wanted to wipe that smile off her face and put her on that flight to Mexico in six weeks.

An hour later, all the missing passengers had been herded on board, and we departed. I put on my headset and turned my music on high in a futile effort to drown out the Happy Place family.

On our final approach into Denver, the hostess announced that three of the connecting flights had been delayed, and passengers on those flights might be able to make our connection. Kansas City was among those three. I was to be rewarded for my forbearance in not strangling mommy, sister, and brother.

Twenty-six people on the flight were affected, and when we landed, everyone but those 26 should remain seated and let us exit first so we’d have a chance to make our flights.

The plane landed. I stood. And so did 96 other people, all struggling with luggage in the overhead bins and at least three small children underfoot. As we slowly wrestled our way down the aisle, the hostess became frantic about the Kansas City flight. “If you’re going to Kansas City, you must run to terminal B, Gate 45. Your flight has boarded.”

There were 9 of us. We ran. Down the escalators to catch the train to terminal B, along the moving sidewalks until we reached Gate 45.

This gate was guarded by a female employee conversing with a young man. We descended on her, demanding frantically, “Is this the flight to Kansas City?”

She ignored our rude interruption and continued her conversation.

I, no longer the trusting, naïve person who boarded that plane in California, ran to the nearest monitor. We were at the wrong gate. “44!” I shouted back to the others. “Our flight is at gate 44, not 45!”

The airline employee lifted her head and smiled. “The Kansas City flight is departing from Gate 44.”

I returned her smile. “Mexico in six weeks! Don’t miss it!”

We all ran back the way we’d come and made our flight. As we ascended into the air over Denver, I leaned back in my seat and drew in a deep sigh of relief. I was going to make it home before dawn. The Happy Place family was not on board. No one was screaming. Life was good.

We landed in Kansas City around 1:30 a.m., taxied down the runway, and stopped. People stood and began tugging their luggage from the overhead bins.

“Please return to your seats. No one is allowed to stand until the plane has come to a complete stop.”

We all looked out the windows. If that plane was moving, it was going slower than the hour hand on the office clock on Friday afternoon.

The hostess explained that it might look like we were stopped, but, really, we were just waiting for someone to move the plane parked in our space at the terminal.

Half an hour later our plane started rolling again, down to the terminal and we heard the welcome sound of the skyway rattling up to the door. Once again, passengers unfastened their seatbelts, retrieved their luggage, and stood in the aisle…waiting. And waiting.

Eventually, the captain announced that we had a slight problem. They couldn’t get the door open, but they were confident they’d soon find someone who could.

Half an hour later when that door finally opened, I almost knocked people down in my effort to get off that plane before the door closed again, before the skyway collapsed, before the Happy Place Family reappeared. I did not feel completely safe until I was home with the door locked behind me.

And that night I made a resolution. From now on, whenever I travel, my mode of transportation will be automobile, bicycle, or feet!

That is the worst trip I have been on since I ate that electric Jell-O back in the ’70s.

Known for her humor, Sally Berneathy is the author of the Death by Chocolate cozy mystery series. Please click HERE to find Guns, Wives, and Chocolate on Amazon. 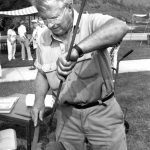