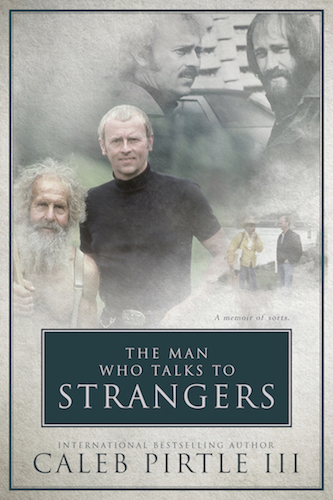 I’m just the man with the notepad and the nineteen-cent ballpoint pen. But I talk to strangers. And every stranger has a different story.

He was a man growing old before his time and facing death.

It was inevitable, and Harold knew it.

I sat with him on death row in the Texas prison.

He couldn’t remember the crime.

He couldn’t remember the time.

And he figured he was guilty.

Harold was a stranger.

I met Porter Waggoner on a tour bus heading south.

Mornings were always the same.

Nights were always in a different town.

He and his band had already made over two hundred one-night stands for the year, and the miles were still rolling past him.

He was addicted to the spotlight.

He loved to night fish when he was home.

He was on the lake at the end of a long tour.

He had drifted off to sleep.

A boat came around the bend, and the spotlight hit him in the face.

“I woke up singing “Carroll County Accident,” he said.

He was a stranger.

The old man had lived the blues.

He didn’t have a lot of money.

He sang for tips.

He sang in a little bar at the end of a dead-end Mississippi road.

He had been in love, he said.

She had loved another.

And every night he sang about them.

Shots in the night.

What did he know about their deaths?

He kept right on singing.

The blind blues singer was a stranger.

His story snared me.

He ran a late-hours Fort Worth nightclub he called The Cellar.

Waitresses floating from table to table in their underwear.

Bring your own bottle.

Bring as much as you want.

Pat Kirkwood supplied the ice and the cokes and the tonic.

He simply called the law.

Women are taking their clothes off, he said.

Then he called the newspaper.

Police are raiding me at midnight he said.

The next morning, his name and photograph were plastered all over the front page.

Can’t get page one advertising?

And he was good at it.

But he would never forget the night the Secret Service agents sat all night and drank all night, and by one o’clock the next day, a President lay dead in a trauma room.

Pat Kirkwood was a stranger.

But he was always a person of interest.

And that’s the reason I wrote my Memoir of Sorts.

The book’s not about me.

I’m just the man with the notepad and the nineteen-cent ballpoint pen.

But I talk to strangers.

And every stranger has a different story.