All you need to develop a good plot is one word. 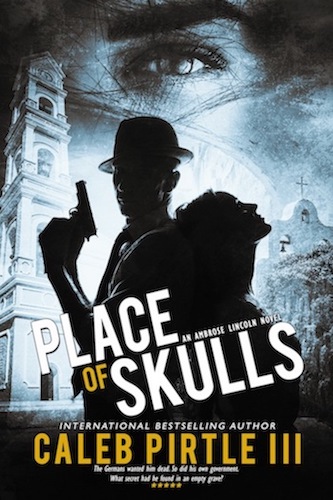 Just write down some ideas connected with BUT, and you’ll find the plot to your story.

I know writers who devote way too much time developing the plot to their novel.

They spend days, even weeks.

They waste a lot of pages.

I believe characters drive the story.

A plot is merely a device that puts the characters in motion.

I believe all plots can be summed up in one word.

For example, here is my plot for Place of Skulls:

A DEA agent has discovered a historical and religious relic that proves Christ returned to Mexico 1,500 years after his crucifixion.

BUT the agent has been murdered, and no one can find the relic.

My plot for Conspiracy of Lies:

In World War II, America is building a top-secret Atom Bomb in the mountains of New Mexico.

BUT the secrets of the bomb are being stolen and smuggled to Russia and Germany.

Take a look at the plot for Casablanca:

A man and woman are trapped on a resort island, and he is fleeing the Third Reich. Their only hope is to obtain letters of transit.

BUT the man who has the only letters of transit available to them is the woman’s former lover who never forgave her for leaving him.

How about To Kill a Mockingbird?

A small-town Southern country lawyer is the most highly respected man in town during the 1950s.

BUT he chooses to represent a black man in a court, a man accused of murder, even though he knows the whole own will turn against him.

How about High Noon?

A sheriff has just married and is ready to settle down with his new wife.

BUT the men he sent to prison are out, and they are riding to town to kill him.

If you’re looking for a plot, they are everywhere.

Just write down some ideas connected with BUT, such as:

He was traveling to see his fiancée.

But his plane crashed.

It was her wedding day.

But the groom didn’t show up.

She and her husband were hiking the Grand Canyon.

But she awoke at their campsite, and he had vanished.

The Art Gallery is showing a new sculpture.

But when the director opens the crate, it is empty.

A woman hires a private investigator to prove her husband is cheating on her.

But the PI finds her husband dead.

A band of Navy Seals is on a mission to assassinate a world leader.

But there is a traitor among them.

A woman divorces her husband and has a restraining order placed against him.

But they run off together to a ski resort.

Somewhere among them, you’ll find the plot you want to write about.