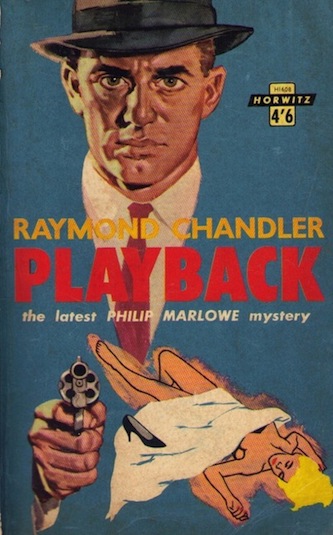 SOME OF US write mysteries.

The world is full of us.

Some of us write thrillers.

Some of us don’t know the difference.

I’ve decided there is no wrong way and no right way to produce a mystery or thriller novel.

And they keep changing.

Just when a writer has his or her genre figured out, some hotshot wordsmith will come along, experiment a little, change all of the rules, and knock out the next blockbuster.

It happens all the time.

However, when it comes to writing mysteries, I try to follow the advice of Raymond Chandler.

He broke a lot of new ground himself back in the 1930s.

He developed the crime fiction detective novel with its own wisecracking gumshoe named Philip Marlowe, who could hold his own against the likes of Sam Spade, Boston Blackie, Travis McGee, and Mike Hammer.

It has been said that Raymond Chandler’s novels can be read as morality plays. As one critic pointed out: “Beneath all that roughhousing and sexual tension can be detected a critique of American society, run by greed and big money, that makes men like Marlow necessary.”

Marlow wasn’t as hard-nosed as other detectives in the shadowed world of pulp fiction, and Chandler’s hoodlums and vixens even had their good sides. True, they might try to kill you, but they were just as likely to do the right and honorable thing when it was called for. They were simply victims of the times, tough, yet sentimental.

Ross MacDonald once said of him: “Chandler wrote like a slumming angel and invested the sun-blinded streets of Los Angeles with a wonderful gusto and imaginative flair. “

And according to The New Yorker, “Chandler wrote as if pain hurt, and life mattered.”

He filled his fiction with such evocative metaphors as:

It was a blonde. A blonde to make a bishop kick a hole in a stained glass window.

Or:  She sat in front of her princess dresser trying to paint the suitcases out from under her eyes.

It has been said of him: “Chandler sandblasted the detective novel of its decorousness and instilled it with a sweaty vitality. Instead of creating self-contained locked room mysteries, he created stories that looked outward, struggling to make sense of a morally ambiguous world. He dedicated his career to the genre, influencing generations of writers after him. His very name became synonymous with his terse, pungent style.”

More than anything, he was faithful to his own ten rules for writing crime fiction: