The Mystery in the Image. What happened to the fourth boat? 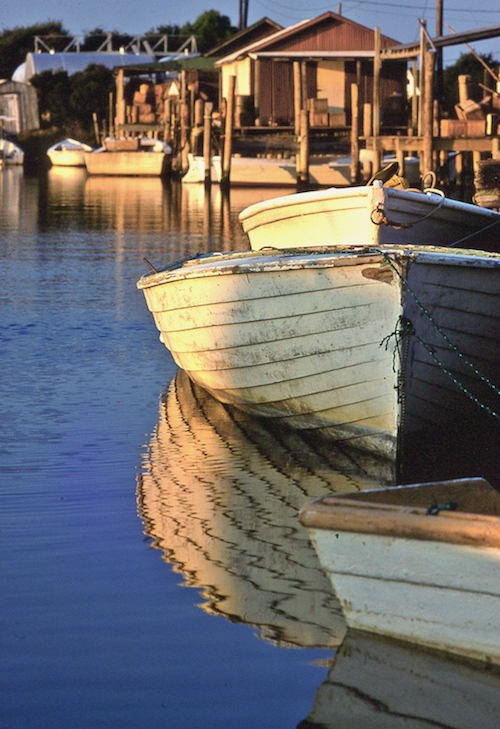 What mystery do you see in the J Gerald Crawford image of boats clinging at the end of the day to the docks of North Carolina’s Outer Banks?

They went down to the sea in boats.

There were four of them.

And, of course, Abner Pawtucket tagged along.

He would cheer you up.

Didn’t need anything funny to laugh, he said.

It’s bound to get better tomorrow.

He kind of liked it the way it was.

He met each morning with a smile.

It had not yet faded when the sun went down.

Abner Pawtucket was a man in love.

Alone or in a crowd, his eyes never left the lovely face of Anne Marie.

It was black, the color of night when the moon forgot to shine, and the north star found a cloud to hide its face.

Her eyes were green.

Emeralds never had such a gleam, he said.

They danced when he looked at her.

They were always dancing.

But she never looked back.

She belonged to another.

And Larry John was a jealous man.

I’ll kill the man who touches you, he said.

He looked across the room at Abner.

She saw his eyes.

Abner spoke to her once.

It was late at night.

He had found her sitting on the porch steps of her home.

Her eyes were red.

Her face was streaked with tears.

Her face was swollen.

The bruise across her chin had turned purple.

It would be black by morning.

Her dress was torn.

It could be patched.

She never said a word.

She didn’t have to.

He squeezed her hand once and walked out into the darkness, the color of her hair.

He spent the night in his boat.

He spent the night waiting for sunrise.

Jack came down to the dock early.

Jasper was right behind.

The bay was calm.

The water was unruffled.

Larry John was the last to reach the inlet.

The fish were waiting.

They went down to the sea in boats.

There were four of them.

Thunder settled upon the water.

Anne Marie was watching on the rise above the shore.

Her eyes searched the horizon.

But three were all she saw.

The rain stung her face.

The winds uncombed her hair.

She waited. She had been waiting for hours.

One would never return.

Such is the mystery in the image.

Who came home, and whose boat was never found?

Maybe it was never meant for us to know.