The Mystery in the Image: 4 Children for Sale 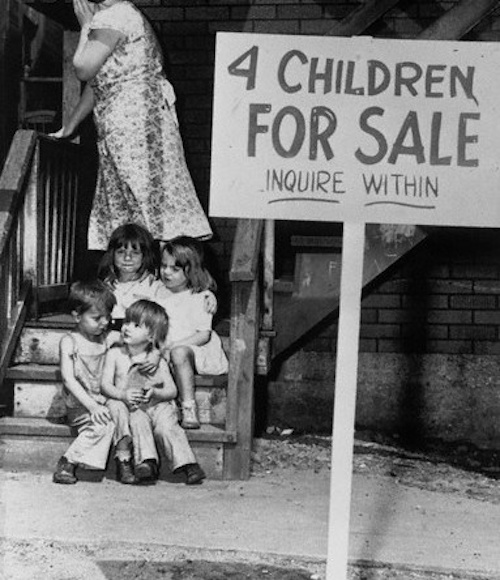 I can’t imagine the anguish that must have torn at a mother’s heart when she made the most heart-breaking decision of all.

I ran across the photograph years ago.

Don’t know where I found it.

But I’ve never been able to let it go.

It saddened me then.

The image grieves me.

The mystery buried deep in the photograph is the mystery of life itself.

How much can one person endure?

How much must one person endure?

But then, life has never claimed to be fair.

Life puts us on earth and tries to see how many times it can knock us down.

It wonders how many times we can get back up.

Sometimes it’s hardly worth the fight.

My mother and father both survived the Great Depression of the 1930s.

It tested a man’s grit.

It tested a woman’s faith.

Cemeteries are littered with graves of the unknown who died without a name a long way from home.

Then there was no money at all.

A family grew the vegetables it ate, or the children went hungry.

They fought for jobs.

Some never came back.

Heartsick was the wife.

Lonely were the children.

Gone were the men.

They often died on the road.

It was though they walked to the edge of the earth and stepped off.

No one ever heard from them again.

I can’t imagine the anguish that must have torn at a mother’s heart when she made the most heart-breaking decision of all.

I can’t feed my children.

Maybe someone else will.

With me, they have no chance at all.

All they need is a chance.

And she carefully printed on a sign: 4 children for sale.

Did one family take them all?

Or did four families take one child each?

Were the children separated forever?

Did they ever see each other again?

Did the mother ever know what happened to them?

Did they remain in the same town?

Were they scattered like fallen leaves by the wind?

Or maybe the saddest occurence of all happened to them.

They sat on the steps, huddled together.

They saw people pass by.

No one looked their way.

No one wanted them.