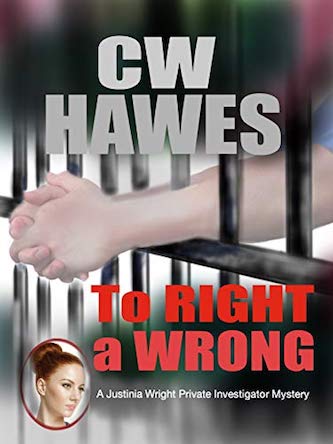 Gavin Gamble sits alone in a prison cell for murder. But is he innocent, and why won’t anybody believe him?

Ace Minneapolis private detective Justinia (“Tina”) Wright thinks so. And she and her brother, Harry, pull out all the stops to right a wrong.

Gavin Gamble, convicted of murdering his uncle, has gone to prison for 40 years. But Tina has a gut feeling something isn’t right about the case. The circumstantial evidence just doesn’t add up.

But when the real evidence trail leads to cousin Martin Bowen, the question becomes: how could he do the deed when the witnesses placed him in Chicago instead of Minneapolis?

Can Tina bust the alibis and right a wrong?

To Right A Wrong is the eighth book in the Justinia Wright Private Investigator Mysteries series. If you like traditional mysteries, along the lines of Nero Wolfe or Hercule Poirot, with wise-cracking humor and enough thrills and spills to keep things interesting

I have a deep appreciation for old-fashioned mysteries when private detectives gathered clues, some real and some imagined, sorted them out, and gathered various and sundry suspects together, usually in the drawing room of a mansion, before revealing the villain in an atmosphere filled with bitterness, fear, jealousy, and suspense.

In his newest mystery, To Right A Wrong, CW Hawes has managed to assemble all of the key ingredients of those old-fashioned, drawing room mysteries of Nero Wolfe and Agatha Christie and bring them into a modern world replete with cell phones, GPS devices, and phone hacking systems.

The investigation is orchestrated by one of the most intriguing literary private eyes of all, the unflappable Justinia Wright, who stands six-feet tall, smokes cigars, drinks high-dollar vintage Madeira wine as though she’s sipping water, once forged art to make a fortune, and drives as though she should have arrived yesterday even though she only left this morning.

A millionaire is dead.

His nephew, Gavin Gamble, sits alone in the darkness of a prison cell, charged with his murder.

The case was open and shut against him..

Two witnesses testified they saw him standing above the deceased with the smoking gun in his hand.

He had a motive.

He had been cut out of the dead man’s will.

Gamble’s own wife believes he is guilty.

His attorney was convinced of Gamble’s guilt.

So why does Gamble insist he’s innocent?

And is anybody listening?

She believes the murder was motivated by greed. She says: “Greed will drive people to sell their mother and sister into prostitution. It will turn friends into enemies. And it is the curse of such a death. I think greed is the worst of the seven deadly sins. Greed is desire gone awry.”

She methodically works her way through the suspects.

And there are many.

To right a wrong, Justina only has to find one answer.

Who was the greediest suspect of the bunch?

The story moves along at a leisurely pace, the dialogue is laced with biting and sometimes dark humor, and in the seedy rich man’s world of lies and deceit, the first liar never has a chance. To Right a Wrong is my kind of mystery. Modern technology doesn’t solve the crime. Old-fashioned investigative work does just fine.

Please click HERE to find To Right A Wrong on Amazon.